As President Trump marks his first 100 days in office, Rep. Peter Welch (D-VT) argues many of his plans have increased inequality. “The tax plan is one where the benefits go to the elites in urban areas and corporations,” Welch says. “Those are direct policies that will be crushing to the economic prospects of folks, especially in rural America.” Meanwhile, a plan backed by the Koch brothers to classify the internet as a public utility would leave the industry to largely police itself.

AMY GOODMAN: Can you go back to what President Trump did propose yesterday, which was the—this week—the tax plan, and how you would assess this plan? Who benefits? Who loses?

REP. PETER WELCH: Well, bottom line, what he does is propose about $5 trillion addition to the deficit. And it would significantly lower taxes. And if you’re in the top 1 percent of this country, it’s a pretty good plan for you. If you’re anyone else, it’s pretty bad. But just some of the elements of it, he talks—first of all, it’s only on one page. So there’s no detail. So there’s no detail on this whatsoever, except in broad strokes.

It would add $5 [trillion] to $7 trillion to the deficit. It would allow a lot of individuals to essentially get that hedge fund exemption, where instead of paying taxes at 35 or 36 percent, they come down to 15 percent. It would eliminate the estate tax, that would really benefit about 5,000 to 6,000 families in the U.S., because most families don’t have to pay the estate tax.

And there’s, I think, a number of reasons to be strongly against this. First, it would hurt economic growth. We saw what happened in the Bush tax cuts. This promise that it produces growth doesn’t work. Second, it accelerates income inequality, and that is the major issue of our time. It just shifts an enormous amount of benefits to very wealthy people at the expense of the middle-class and low-income people and at the expense of investing in our economy.

And third, the deficit is something that we really—progressives should talk about, because what happens here is if they do a tax cut that shifts all this money to the high-income folks and to corporations, the next year, when the deficit goes up as a result of that tax cut, there’s enormous pressure to cut the budget and then blame the deficit on, quote, “too much spending” as opposed to tax cuts we never paid for.

So this is a—this is a very ominous direction that the president is taking, because it is a heel on the neck of the middle class. It guarantees that we won’t have the investment in infrastructure, sustainable healthcare, making college affordable, NIH and searching for cures for diseases. So, this is a very reckless—in my view, very reckless plan. The good news is, I think it won’t pass.

AMY GOODMAN: The capital gains tax cuts, talking about reducing from 35 percent to 15 percent at a—what is it?—something like adding $3 trillion to the deficit, how does this square with deficit hawks in Congress?

REP. PETER WELCH: Well, what we’ve noticed, unfortunately, is that the deficit hawks suspend their convictions in favor of a tax cut. And I was reading comments from one of my Republican colleagues, who says he’s a deficit hawk, and says, “We have to endure the pain of a deficit.” Well, the “we” turns out to be the American people. The benefit of the tax cut goes to the very wealthy. So, there is obviously hypocrisy here. It doesn’t work.

And I think the interesting thing for me is that I think progressives have to be concerned about this deficit, because it serves to become a tool, an argument. After the deficit goes up as a result of these unpaid-for tax cuts, there’s enormous pressure to bring down spending on all of those things that middle-class America needs, including infrastructure and job-creating opportunities. By the way, there’s another—

AMY GOODMAN: I wanted to ask you about—

AMY GOODMAN: No, go ahead.

REP. PETER WELCH: Well, what I’m noticing in this first hundred days is something that is actually kind of puzzling. Donald Trump won in rural America. That’s who elected him. And every one of his policies—trying to repeal healthcare, this tax system that is an enormous shift of wealth to really the coastal elites—all of these things are really punishing to rural America. And he’s going literally for policies that hurt the people who elected him and put their confidence in him. So that’s a political puzzle to me, because it doesn’t make sense to give the back of your hand to the people who got you across the finish line.

AMY GOODMAN: How do his plans increase inequality in this country?

REP. PETER WELCH: Well, if you have a healthcare plan where 24 million people—pardon me—who have healthcare today lose it, that’s pretty bad. If you have a healthcare plan where a lot of these community hospitals, in Vermont and all around the country, have gone from red ink to black ink because all the free care they had been giving are now covered by Medicaid, that’s going to—that really hurts rural America, where so many of those hospitals are placed.

The tax plan is one where the benefits go to the elites in urban areas and to corporations. And it just sucks more money out of rural America. So those are very direct and rugged policies that are going to be crushing to the economic prospects of folks, especially in rural America. It’s an all-out assault.

You know, net neutrality—I’m on the Energy and Commerce Committee. We’re talking about that. More than any other section of the country, we need broadband buildout in rural America. We’re losing population there. The economy is struggling. And if we’re going to create jobs, we have to have a robust internet. And we have to have access to that internet, whether you’re a small entrepreneur in a garage in Brattleboro, Vermont, or in Peoria, Illinois, just no different than if you’re in New York City or San Francisco or L.A. So, I’m surprised that he’s allowing his FCC commissioner now to propose essentially getting rid of net neutrality. And we’re going to end up, if they’re successful, with fast lanes and slow lanes and prioritization, and that hurts rural America.

AMY GOODMAN: So how can Congress weigh in? You’re talking about Ajit Pai unveiling a plan at a forum hosted by FreedomWorks, a right-wing group, where he laid out his plan to really dismantle net neutrality, a plan that’s backed by the Koch brothers, and a rule classifying the internet as a public utility, leaving the industry to largely police itself. Evan Greer of the digital rights group Fight for the Future said, quote, “Internet users will fight tooth and nail to defend our basic right to connect, create, learn, and share.” How can Congress weigh in here?

REP. PETER WELCH: Well, first, we are weighing in. You know, I serve on the telecom committee. Mike Doyle is our chairman on that committee. And we’re mobilizing our colleagues to fight, make the arguments, have hearings. So, we’re going to be doing all that we can.

But there’s another reality here. The Republicans enjoy a majority in the House and in the Senate. So we don’t have the numbers to push them back. And it’s why Evan Greer, what he says, the mobilization of people is absolutely so important. If it’s just the Democrats in Congress that are fighting for net neutrality, without the demonstration of widespread grassroots support, we’re not going to succeed.

And if you remember, when then-Chairman Wheeler was considering this whole issue, there was an enormous outpouring from the public about protecting net neutrality, and I think it had an influence. I thought Chairman Wheeler came down with a good decision, and he was an excellent FCC commissioner. But we’ve got a new team in town. But that public mobilization, I think, is absolutely crucial. It’s not just Congress. And we don’t have the numbers here. So we need help from folks outside. 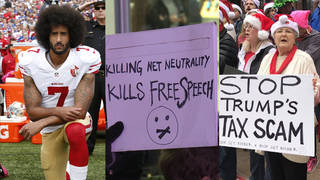 2017 in Review: Allan Nairn on Trump’s “Rightist Revolution” & the Social Movements Pushing Back