Our guest, Congressmember Peter Welch, explains why he joined his Democratic colleagues on the House Oversight Committee in demanding White House documents on President Trump’s former national security adviser, Michael Flynn. In a letter to Chairman Jason Chaffetz, the group wrote, “There is obviously a paper trail that the White House does not want our Committee to follow. If the White House refuses to produce the documents requested by the Oversight Committee—as it has to date—we believe the Committee should consider employing compulsory measures as it did in similar cases during the previous Administration.”

AMY GOODMAN: We’re talking to Congressman Peter Welch in the Russell Rotunda in Washington, D.C. He is the sole Vermont congressmember [sic]. And we’re here in Burlington at Vermont PBS. Congressman Welch, I want to ask you about comments by your colleague, Maryland Congressman Elijah Cummings, the top Democrat on the House Committee on Oversight and Government Reform. Cummings spoke Thursday about the investigation into President Trump’s former national security adviser, Michael Flynn.

REP. ELIJAH CUMMINGS: I’m releasing a letter that was sent directly—directly to General Flynn on October 8th, 2014, from the Office of General Counsel at the Defense Intelligence Agency, his former agency. This letter explicitly warned General Flynn, as he entered retirement, that the Constitution prohibited him from accepting any foreign government payments without advance permission. The Pentagon’s warning to General Flynn was bold, italicized, and could not have been clearer. … We have no evidence, zilch, that he obtained permission from the secretary of the Army and the secretary of state to accept any foreign government payments as required by law.

AMY GOODMAN: So, that’s Maryland Congressmember Elijah Cummings. Vermont Congressman Peter Welch, just to correct what I said before, you are the only congressman from Vermont. Of course, there are two senators. But you joined with your Democratic colleagues in the House Oversight Committee in demanding White House documents on Michael Flynn. What are you looking for here? You also have the Trump administration blaming President Obama for giving Michael Flynn security clearance.

REP. PETER WELCH: Well, first, with respect to General Flynn, we’re looking for evidence of the payments that he received from foreign governments that would be in violation of the law. There’s an immense amount of evidence. He has acknowledged some of this, that he was on the payroll. He was getting compensation from foreign governments in that—during the time that he had a security clearance. And there’s serious questions about him being in absolute violation of the law. So that’s the issue with respect to General Flynn.

But the second issue, the one that’s really ongoing, is the Russian connection and what was it, if anything, in the campaign. You know, there is no question. All the intelligence agencies have acknowledged the Russians deliberately hacked into the Democratic National Committee, deliberately disseminated information in an effort to tip the balance in that campaign. The question is whether Trump campaign associates were participating and engaged in ongoing discussions with any of the Russian operatives. We don’t have the answer to that question, but we deserve the answer to that question. And that’s the point of these investigations that are occurring in the intelligence committees in the House and Senate. 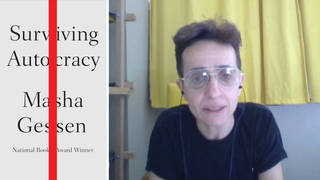