As we broadcast from Burlington, Vermont, which is a sanctuary city, Vermont Rep. Peter Welch says there has been enormous citizen support toward undocumented workers. “You’re just seeing people across this country say, 'Wait a minute. That's not the America I know,’” Welch notes. He also discusses the need for local control over whether police departments enforce immigration laws, and says, “It is appropriate for law enforcement to have discretion.”

StoryMar 31, 2017Is ICE Targeting Undocumented Activists for Arrest? Organizers Speak Out After 11 Days in Jail

AMY GOODMAN: Congressmember Peter Welch, we’re going to leave it there, but I want to ask you one question that’s going on not only in Vermont but around the country, and that is the issue of sanctuary cities. Here in Vermont, we’re in Burlington, Burlington becoming a sanctuary city, Montpelier, the capital. Talk about what this means and the resistance at the state and local levels to the Trump administration’s immigration policies and cooperating with ICE arrests.

REP. PETER WELCH: Well, I think it’s two things. First of all, I think there is enormous citizen reaction and rejection of the president’s just fierce hostility towards immigration and towards undocumented workers and good citizens and good people in this country. So him building the wall, vilifying Hispanics—you’re just seeing people across this country say, “Wait a minute. That’s not the America I know.”

Secondly, there is a—this is a local control issue, in many respects. Is the local police department in your city and mine essentially just an arm of ICE? Or has it got primary responsibility to protect and enforce the laws in that community and make that community a safer place? So, some of this is pushback by local communities who don’t think that their police forces should be pushed around by the political agenda of President Trump. And you’re seeing a combination of political leaders saying, “Hey, we want to have our police forces protecting our people and enforcing our laws.” And you’re seeing citizens rejecting the dragnet approach that President Trump is taking towards immigration.

You know, there is a lot of discretion that law enforcement agencies have. And it’s appropriate in law enforcement to have discretion. You know, if you’re going three miles over the speed limit, most police officers won’t give you a ticket, even though, quote, “legally” they could. And that discretion with President Obama was restrained. With President [Trump], it’s really aggressive. So that’s, I think, what you’re seeing with the sanctuary city movement.

AMY GOODMAN: Congressman Peter Welch, thanks so much for being with us, the sole U.S. congressman from Vermont, chief deputy whip of the House Democratic Caucus, on the eve of the hundredth day of the Trump administration.

This is Democracy Now!. When we come back, we’ll turn to his fellow Vermonter, who also is in Washington. That is Bill McKibben, co-founder of 350.org, who is there along with thousands of other people as they stream into Washington for the People’s Climate March on Saturday. Democracy Now! will be covering it live. Stay with us. 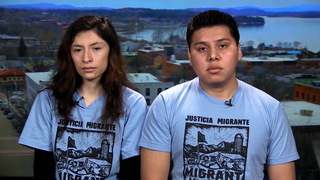 Is ICE Targeting Undocumented Activists for Arrest? Organizers Speak Out After 11 Days in Jail