2017 in Review: Allan Nairn on Trump’s “Rightist Revolution” & the Social Movements Pushing Back

We look back at the biggest news headlines from 2017 with award-winning investigative journalist Allan Nairn, from the Republican tax bill to net neutrality to Colin Kaepernick and the #MeToo movement.

AMY GOODMAN: Well, on Friday, President Donald Trump signed the Republicans’ massive rewrite of the U.S. tax code, greenlighting what could be the largest transfer of wealth from the bottom to the top in history. Allan Nairn, investigative journalist, you’ve covered economic issues at home, especially the growth of inequality in this country. Can you respond to what has just happened and what this means, as President Trump went then immediately to his ritzy, private resort, Mar-a-Lago, and told friends there in his private dining club, “You will get rich from this”?

ALLAN NAIRN: Well, in a sense, the current governing group, the Republicans and Trump, in a sense, it’s a coalition between the racists and the rich, the most extreme elements of both. And what this does—and they’re a minority in the United States. The extreme rich are a fraction of 1 percent. And the most intense racists and anti-immigrant people are perhaps a majority of the American white population, but definitely a minority of the whole American population.

So how do you govern if you’re a minority in a national system that’s heavily based on elections, where lots of decisions—not all decisions, but lots of decisions—are made on the basis of elections? Well, you have to build in structural advantages. You have to have levers. The U.S. Constitution gives some of those levers, with things like the Senate, where small states like Montana and Idaho, etc., are able to send two senators, equal to that of California; things like the Electoral College; things like gerrymandering of House districts; of voter suppression aimed at groups like African Americans and also younger people, who might vote against the right.

And one thing that the tax bill does is it adds yet another layer of structural obstacles to the actual majority in the United States, the actual majority of people who oppose the program of Ryan and McConnell and Trump and the largest corporations. It adds yet another obstacle, because of that $1.5 trillion being transferred, perhaps the largest transfer of wealth in American history. A large chunk of it is going to wind up in the pockets of either the rightist individual oligarchs, like the Kochs, like the family controlling Walmart, like Mercer, who directly fund their own independent political operations that spearhead things like voter suppression operations. And on the other hand, another big chunk of it, through the corporate tax cut, will go to the largest corporations, like Wall Street and Apple and so on, who will have that much more money to spend on lobbyists. So, not only will it be an immediate money transfer, worsening inequality while, at the other end, 13 million people lose their healthcare and many thousands more will die as a result, but it also is a systematic increase in the political power of the radical right. So it’s yet another obstacle that’s been thrown up.

AMY GOODMAN: I wanted to ask you, very quickly, about net neutrality. This is a major moment, with Ajit Pai, the FCC chair, the Federal Communications Commission, rolling back net neutrality—what that means and what is happening around censorship and the avenue of free expression.

ALLAN NAIRN: Well, free expression and the chance for political dissent, a lot of which these days takes place through the internet, is in great danger, and it’s under attack now from both the Republicans and the mainstream Democrats—the Republicans with net neutrality, which essentially will give license to the companies that control the internet to start cutting traffic to sites, shutting down sites, if they want, and on the other side, from the Democrats, who have been using the Russia issue as an occasion to demand that Twitter, Facebook, Google and others start censoring their posts. There were hearings a couple months ago in Congress, first in the Senate and then in the House, where the Democrats were holding up placards of false information put out allegedly by Russia during the election. And they said—they had the Twitter people there and the Facebook and the Google people, saying, “Why didn’t you censor this? Why didn’t you stop this message before it could get posted on your site?”

ALLAN NAIRN: Demanding—demanding of these corporations, saying, “Why aren’t you doing political censorship? If you don’t—you, the corporation, don’t—start doing political censorship, we, the Congress, will start having to force you.” So you have the Republicans giving the corporations the means to do censorship, and you have the Democrats giving them a motive, a particular demand. And it’s extremely dangerous. I mean, they could—if they wanted to, they could start cutting the traffic to the Democracy Now! site. Already, AlterNet said, a few months ago, that their own traffic was hurt when Google changed their search algorithm in response to these kinds of these pressures.

AMY GOODMAN: And 10 seconds on net neutrality, on that issue?

ALLAN NAIRN: Well, that gives the corporations the right to charge more for faster internet. So that means that people and sites with fewer resources can have less ability to reach the public.

AMY GOODMAN: I want to end with the issue of the movements that are pushing back, with Colin Kaepernick, who came to New York, accepted the Puffin/Nation Prize for Creative Citizenship for having sparked a movement against racism and police brutality, for, well, taking the knee.

COLIN KAEPERNICK: I would like to say, at this point in time, with freedom of speech and freedom of press being under attack in so many ways, in so many forms, The Nation Institute and the work that journalists and reporters are doing right now is more important than it ever has been. You truly are the pathway for the people to see the truth that’s going on.

AMY GOODMAN: So that was Colin Kaepernick, who can’t get a job in the NFL because he took the knee, protesting police brutality. From this protest to the #MeToo movement, Allan Nairn—we just have 30 seconds—what gives you hope?

ALLAN NAIRN: Well, the majority of people who voted actually voted against Trump, on the popular basis in the last election, are rejecting this attempt at rightist revolution. But they cannot succeed unless there’s a massive mobilization that’s persistent and doesn’t stop, because of all the structural obstacles—

ALLAN NAIRN: —that are built in. But in the November congressional election, if the Republicans can be swept out of control of the House and the Senate, and if people take to the streets, like they did in Honduras, they can win.

AMY GOODMAN: We have to leave it there, Allan. This is Democracy Now! Thanks so much for joining us. 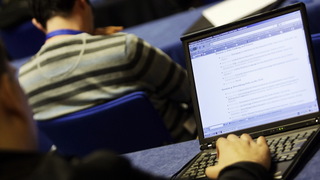