Civil rights advocate and best-selling author Michelle Alexander responds to the new push by Attorney General Jeff Sessions to escalate the war on drugs by rescinding two Obama-era memos that encouraged prosecutors to avoid seeking inordinately harsh sentences for low-level drug offenses. He has also instructed Justice Department prosecutors to pursue “the most serious” charges for all drug offenses.

StoryJun 07, 2017Worst Epidemic in U.S. History? Opioid Crisis Now Leading Cause of Death for Americans Under 50

JUAN GONZÁLEZ: I want to ask Michelle Alexander, there was—there appeared to be some hope in the last few years that the country was finally beginning to turn away from mass incarceration, especially when it came to drugs. And now we’re seeing, under the new Trump administration—we heard what some of the stuff that attorney—the new attorney general, Jeff Sessions, says. Your reaction to where the country appeared to be heading and where now—the turn that it’s now taking?

MICHELLE ALEXANDER: Well, I think it’s clear by the rhetoric coming out of the Justice Department today that they are committed to reviving a warlike mentality towards poor people and people of color. And I think we need to respond forcefully, with as much courage and compassion as we can muster in these times.

You know, a few decades ago, politicians were banging the podium, calling for “law and order” and “get tough,” and declaring war. And our, you know, television sets were filled with images of crack mothers, crack babies. And a literal war was unleashed on communities, war that devastated the lives of people like Susan and families and communities of color nationwide.

Well, today, the enemy has been defined as those brown-skinned immigrants sneaking across the border. And, you know, Donald Trump has banged the podium, you know, saying, “We must get rid of them.”

JUAN GONZÁLEZ: He even said it yesterday with Colombia, right?

MICHELLE ALEXANDER: Yes, claiming they’re bringing drugs and that they’re murderers, and urging our nation to get rid of them all. You know, that war that was declared on drugs decades ago gave birth to a private prison system, gave birth to the system of mass incarceration. And if we had risen to the challenge of the war on drugs the way that we could have and should have, the system of mass deportation would not exist today. The private detention centers that are locking up immigrants today wouldn’t even exist but for the drug war that was waged, with little resistance, for decades in this country and that birthed a prison system, you know, a penal system, unlike anything this world had ever seen before.

So I hope that we will learn the lessons that the drug war has to teach us, and rise to the challenge this moment in history presents, and build a truly transformational, revolutionary movement that will not only dismantle the system of mass incarceration and mass deportation, but will lead us to a new way of life, a new way of caring for one another and for our communities, and reimagine what justice can and should be in this country.

AMY GOODMAN: But, Michelle, that’s not the direction, of course, of the Trump administration—Jeff Sessions, the attorney general of the United States, just announcing an escalation on the war on drugs, going after drug offenders, people who are addicted. Can you talk about the significance of what this means, pushing for mandatory minimums when there’s been this consensus now, in many ways across the political spectrum, of the right, from the Koch brothers to Newt Gingrich, to progressives who have been pushing for reform for a long time? What does this mean? What effect will it have?

MICHELLE ALEXANDER: Well, at the federal level, it will have significant effect for those who are arrested and charged with federal crimes, particularly drug crimes, and who will be facing years, perhaps decades, longer than they might otherwise have, you know, before Sessions kind of overturned Obama’s memo directing a slightly more compassionate approach.

But there’s tremendous movement in states and in communities around the country, in places like California and Ohio. I can go down the list of states and communities that are calling for legalization of marijuana, that are moving to declassify drug offenses from felonies to simple misdemeanors. There is momentum that will not be turned back overnight.

And that’s why I think it’s important for us not only to see the necessity of continuing to build momentum to end the drug war, but to understand that the racial politics that gave birth to this drug war are the same racial politics that have given birth to the war on immigrants. And it’s not simply a matter of building a movement to reform drug policy. It’s about building a movement that will break the history and cycle of these racially punitive politics that birth systems of racial and social control in whatever form.

And so, I’m hoping that in the months and years to come, that we’ll see more coordination, more unity between the movements to end mass incarceration and the movements to end mass deportation, and come to see it’s the same struggle to define who is worthy, who has dignity and value, and who is disposable. And ultimately, we are trying to birth a new America in which each and every one of us, no matter who we are, where we came from or what we may have done, is viewed as fully human, with dignity and value and, you know, deserving of inclusion in our nation, despite the efforts to distract and to divide and to elicit from us our most punitive impulses.

JUAN GONZÁLEZ: I’d like to ask Susan—we only have about 30 seconds, but is there any hope of your expanding your successful New Way of Life to other cities across the country?

SUSAN BURTON: The next stage is to actually identify areas in the country and develop a network of the model in which A New Way of Life has developed that successfully brings people back into the community. There’s been a lot of interest, and I’m going to respond to that interest, because all over America we have found that women have been taken out of their homes, men have been sent away, and they need to be able to come back in successfully.

AMY GOODMAN: Susan Burton and Michelle Alexander, we thank you so much for being with us. Susan’s new book is called Becoming Ms. Burton.

That does it for the show. I’ll be in New Mexico tonight in Santa Fe, tomorrow in Tempe, Arizona and in Houston. 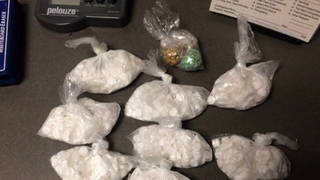