“I Could Have Died”: Protesters Detail Violent Attack by Turkish President Erdogan’s Guards in D.C.

Last week Turkish President Recep Tayyip Erdogan’s security detail assaulted a group of peaceful protesters outside the Turkish ambassador’s residence. Video from the scene shows Turkish President Recep Tayyip Erdogan looking on during the assault. It’s not clear if Erdogan gave the order for the attack. The assault came shortly after Erdogan was welcomed to the White House by President Trump. For more, we speak with Seyid Riza Dersimi, who was violently attacked during the protest and rushed by ambulance to the hospital, where he received stitches on his nose and was treated for a head injury. We also speak with a Kurdish activist who attended last week’s protest.

AMY GOODMAN: We end today’s show looking at Turkey’s crackdown on protest—not in Ankara or Istanbul, but here in the U.S. Last week, the Turkish President Recep Tayyip Erdogan’s security detail assaulted a group of peaceful protesters outside the Turkish ambassador’s residence. Video from the scene shows Turkish President Recep Tayyip Erdogan looking during the assault. It is not clear if he gave the order for the attack. Among those assaulted by the Turkish security detail were American diplomatic security officers. Police briefly detained the assailants, but released them after learning they held diplomatic immunity.

The assault came shortly after Erdogan was welcomed to the White House by President Trump. During the meeting, Trump did not mention Turkey’s deteriorating human rights situation, which has seen nearly 50,000 people and 150 journalists arrested since a failed coup last summer. On Sunday, Secretary of State Rex Tillerson denounced the violent clash during an interview with Fox News Sunday’s Chris Wallace.

SECRETARY OF STATE REX TILLERSON: We did call the ambassador of Turkey into the State Department to discuss what occurred with them and express our view that this is simply unacceptable. There is an ongoing investigation, Chris, and I think we’ll wait and see what the outcome of that investigation is. But we have expressed our dismay at what occurred at the Turkish Embassy.

AMY GOODMAN: Well, for more, we go to Washington, D.C., where we’re joined by two guests, both eyewitnesses to last week’s violence outside the Turkish ambassador’s residence.

Seyid Riza Dersimi was violently attacked during the protest, rushed by ambulance to the hospital, where he received stitches on his nose, was treated for a head injury. His assailants knocked out one of his teeth and loosened several others. Dersimi is a businessman who’s been a U.S. citizen since 1992.

And we’re joined by a Kurdish activist who attended last week’s protest.

I want to welcome you both to Democracy Now! Seyid Riza Dersimi, explain what happened to you. Tell us about the scene that day.

SEYID RIZA DERSIMI: Well, we went to—like 13, 14 of the citizens of American—we are American citizens. We went to Turkish ambassador’s house to protest Erdogan. We wanted to he hear our voice. We are not happy the way he—his dictatorship. And as soon as we get there, the police—we just followed the D.C. police orders. And the D.C. police sent us across the street. And when we were there, right away, the people in front of the Turkish ambassador’s house, they start to curse us. They start to use F-words. And then we—our slogan was very peaceful. It’s not violent whatsoever. We were demanding peace in Turkey. And we were—this is our slogans. Erdogan is a baby killer. ISIS and Erdogan is the same. ISIS is made in Turkey. Please, Mr. President Trump, stop Erdogan, because Erdogan is killing, attacking the Kurds. Kurds fights ISIS, against ISIS. And the Turks fight Kurds. So, we wanted to Erdogan hear our voice. That was the reason we were there.

But 10—10, 15 minutes later, and first they attacked, and then the police stopped them. Some civilian they attacked, and police stopped them. And then, like five, 10 minutes later, the Erdogan bodyguards, they passed the police, their block, and then they attacked us, very barbaric way. And first I remember there was a woman next to me, Lusik. She’s a Yazidi represent in Washington. They attack her. They—one of them just grabbed her head and started punching, and I tried to cover her head. And then, all of a sudden, three or four of them attacked on me, and I found myself on the street. And then they were kicking, one after another, my head. I tried to get up, but they were kicking me, so I realized that I cannot. And I laid down on the floor, and I tried to cover my head with my arm. And I could have died. I don’t know how long I stayed there. I lost it. And then—and then, all of a sudden, I realized no one around me, and I tried to get up, and I saw I was bleeding. And then some police officers, they came, and they raised me up, and they moved me towards the circle.

AMY GOODMAN: I wanted to ask [a Kurdish activist who attended the protest]. What did you see at that site on Tuesday in front of the Turkish ambassador’s house?

KURDISH ACTIVIST: Well, I was actually—I arrived like five minutes later, from—there were two attacks. The first one happened when I already arrived there. It was like five minutes after that. And my friend’s daughter, 7 years old, Shayan [phon.], was like—she was crying when she saw me. I took her, and then, with my son, 4-years-old son, I took them to the like—we were like six feet behind the 10 people. And I was trying to soothe her.

All of a sudden, I saw these men in black suit, they were just like—they were rushing into my friends. And at first I thought, “No, they will not come to attack us. Police will stop them.” But then I saw like they furthered, and then they came close to me. They couldn’t grab me, but they grabbed one of my friends. You might have seen her pics, photos, in media. He was like—he was put on a [inaudible] leg position.

And I was—even though I felt very guilty after that, because I couldn’t protect her, because I had my kid with me, 4-years-old son. And I’ve been saying that I was there with my son, because we’ve been to the protests in D.C. like for a long time. I’ve been here like for 10 years. And I take him to every protest. It is because we never got involved in any violence. And it is just usual for the Kurdish community here to take their kids. Even pregnant women, sometimes they come to the protest.

So, and I tried to—when I saw my friend was punched by one of these men in black suit, I tried to run away to the other—the opposite direction. And I saw that there was a door open, and it was—later I realized that it was the Kenyan Embassy. I asked them, “Can I come in?” They told me like, “You’ll be safe. The American police is here.” I said, “They couldn’t protect us.” First I thought they didn’t protect us, but then I—after watching the videos, no, actually, they couldn’t, because they’re outnumbered. And I think they had guns. The Erdogan’s bodyguards, they had guns. And I’m sure that the state police was startled, too. They couldn’t—they couldn’t do anything against them.

AMY GOODMAN: Who are these security? And, first off, Erdogan—video was released, newly published video, that shows Erdogan looking on as members of his security detail assault the group of peaceful protesters. What are you calling for now? And did you see Erdogan looking on?

AMY GOODMAN: He has just extended the state of emergency in Turkey on Sunday. And what are you calling for now? The men who were arrested apparently have diplomatic immunity, and so they were released. What are you demanding? On Fox, they asked Tillerson. Chris Wallace asked Tillerson if the U.S. would be expelling the Turkish ambassador, and Secretary of State Tillerson said there needs to be an investigation.

KURDISH ACTIVIST: Well, I want to say that this is not the first time that his bodyguards are attacking protesters. This happened in Ecuador last year, and also it happened at the Brookings Institute in Washington, D.C., again, in 2016. Well, they—basically, they get away with that. And because of that, I guess they think that they can do whatever they want in other countries. They do that in Turkey. Like they even—so, like, I wanted to say that this violence that we witnessed on Tuesday, it is—we can take it as like—as a representation of the Turkish state violence against dissidents and opponents in Turkey. But the scale of it was so—the amount of the violence that we witnessed was nothing to be compared to the ones that people are having on a day-to-day basis in Turkey. So, yes, McCain called for the expulsion of the ambassador. I think they should do something, and especially this new government, especially Mr. Trump, the president. He is more patriotic. And this happened in American soil. So, I hope they will do something. And they need to do something, actually, like because they get away with that. They get away with the one in Ecuador the last year. That means that this is a recurring thing that’s happening.

AMY GOODMAN:Do you think that Trump’s position on Turkey, you know, calling—when Europe was condemning the referendum that Erdogan pushed through that would increase his dictatorial powers, do you think Trump is influenced by Mike Flynn, his former national security adviser, who turned out to be a paid foreign lobbyist for the Turkish government?

KURDISH ACTIVIST: Is someone going—well, actually, they—basically, they have links with the Flynn, that we saw that, but I don’t—but Turkey stands against—Turkey is always like—they don’t want to upset Turkey. This is how I see it, because I think it’s a very important ally in the Middle East. And I don’t think that they will—they wanted to break their ties with Turkey.

AMY GOODMAN: And, Seyid, do you plan to protest Erdogan anymore, after you were brutally attacked and hospitalized?

SEYID RIZA DERSIMI: Absolutely, absolutely, whenever I have a chance. I am—I’m not going to give it up. As an American citizen, I have a right—it’s our First Amendment—to protest, to have a peaceful protest, whenever or wherever we want. Mr. Erdogan cannot take away this, my right, as a Kurdish from Turkey. This happens in Turkey, shouldn’t happen in Turkey, either. But as a— 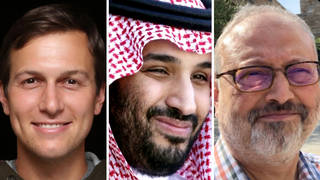