In Britain, nearly 4,000 soldiers have been deployed to support local police departments in the wake of a suicide bombing that killed 22 people and injured dozens at a concert on Monday night. The victims were mostly young girls and parents who had taken their daughters to the concert by American pop star Ariana Grande. Authorities have identified the bombing suspect as Salman Abedi, a 22-year-old British man whose parents emigrated from Libya. ISIS has claimed responsibility for the attack. We speak to British political commentator Tariq Ali.

AMY GOODMAN: This is Democracy Now!, democracynow.org, The War and Peace Report. I’m Amy Goodman, as we turn to Britain, where nearly 4,000 soldiers have been deployed to support local police departments in the wake of the suicide bombing that killed 22 people and injured dozens at a concert in Manchester Monday night. The victims were mostly young girls and parents who had taken their daughters to the concert by the American pop star Ariana Grande.

Authorities have identified the bombing suspect as Salman Abedi, a 22-year-old British man whose parents emigrated from Libya. He lived just miles from the stadium that hosted Monday’s concert. Abedi’s name first appeared in the press after it was leaked by U.S. officials to journalists, even though the investigation was still unfolding. British authorities say they don’t believe Abedi acted alone in carrying out the bombing. Police have reportedly detained four people in Manchester as part of the investigation. ISIS has claimed responsibility for the attack.

Prime Minister Theresa May has announced the threat level in the U.K. will be raised from severe to critical, indicating another attack may be imminent.

We go no to London to speak with Tariq Ali, political commentator, historian, activist, filmmaker, author, editor of the New Left Review. His latest book has just been published; it’s called The Dilemmas of Lenin: Terrorism, War, Empire, Love, Revolution.

Tariq, welcome back to Democracy Now!

AMY GOODMAN: Talk about the Manchester bombing, the significance, the reverberations right now, and the investigation that’s going on.

TARIQ ALI: Well, so far we know very little, Amy, apart from what you’ve already reported on screen. We don’t know whether this 22-year-old suicide bomber was part of a larger group. We do know that the weapons he carried to blow himself up were of a cruder sort. And many people, most serious and seasoned observers of terrorism, are denying that he was linked to ISIS. ISIS, now itself in deep crisis in the Middle East, is claiming any attack, or wherever it happens in the world, as carried out by one of its own. Basically, very little has been revealed by the British intelligence services so far.

There was an initial report saying that they knew his identity and knew who he was, but nothing more has been said. The fact that he is of Libyan descent, was born in this country, and his parents were Libyan exiles, can’t be kept unlinked to the war that was waged on Libya, the six-month bombing carried out by NATO, the fact that that country now is totally wrecked. I mean, we have a pattern: This atrocity happens, we all denounce it, everyone says 95, 96 percent of the Muslim community is opposed to all this—which is all true. Then people like myself and a few others from the antiwar movement say this is not unrelated to the war on terror that has been going on now since 2001. Every Arab country that’s occupied, wrecked, has a consequence in Europe.

So it’s—we’re part of a sort of really vicious, now, cycle, where the wars go on, and terror attacks, carried out usually by tiny jihadi groups or by individuals, as appears to be in this case, goes on. Very little attention now is paid to the foreign policy link with these things, Amy. And that is a bit worrying, because these things started happening in Europe, the United States, after the involvement of the West, in quite a brutal way, in what is going on in the Arab world.

And the other point to be made is that these terrorist attacks are not confined to Europe. They take place every single day in Iraq, in Syria, in Afghanistan, in Pakistan and Yemen, Bahrain. So when you have President Trump visiting Saudi Arabia, backing their war in Yemen, backing their war in Bahrain, people feel that the West is colluding with these people. It’s got absolutely nothing to do with freedom and democracy.

PRESIDENT DONALD TRUMP: This is what I’ve spent these last few days talking about during my trip overseas. Our society can have no tolerance for this continuation of bloodshed. We cannot stand a moment longer for the slaughter of innocent people. And in today’s attack, it was mostly innocent children. The terrorists and extremists, and those who give them aid and comfort, must be driven out from our society forever.

TARIQ ALI: Well, the response is fairly straightforward, Amy, that innocents are being killed by United States policies in different parts of the world. There are seven wars going on at the moment. Trump had promised to change course, as we all know, and everyone was a bit surprised, but he’s now returned to the normal behavior of an American president. He bombed Syria. He has made friends with Saudi Arabia. It was very entertaining to see Steve Bannon, one of his advisers, you know, trapped in a collection of Arab princes and Arab diplomats in Saudi Arabia. So, it’s business as usual.

We all deplore the loss of lives of innocent people. We do. Everyone does. But we can’t have double standards, in which we say that someone killed in Europe, they’re lives are more valuable than the lives being taken in large parts of the Muslim world. And unless the West understands that these double standards provoke and anger more people, it will carry on.

How do you stop it? I mean, they’re doing all sorts of things in Britain. They’ve got a prevent campaign to preempt all this. What does it say? It tells schoolteachers to spy on students. It tells children in schools, “If you hear one of your fellow students”—obviously Muslim—”saying something that is unacceptable, do report him.” I mean, asking children and teachers to spy on school students, it’s not going to work.

AMY GOODMAN: Tariq, couldn’t the Manchester model be used? You show the parents, you talk about the children who have died, and use that model for children killed in Yemen, Iraq, Afghanistan. Name the names.

TARIQ ALI: Absolutely. This model should be used, you know, but the media is not under our control or under the control of most people who want to look at the world seriously and not in a cartoonish way. So, you know, there’s already been exterminist talk: “Wipe them all out. Drive them out of the”—I mean—

AMY GOODMAN: Tariq, we have to leave it here, but we’re going to continue the conversation after the show and we’ll post it online at democracynow.org. Tariq Ali, political commentator. 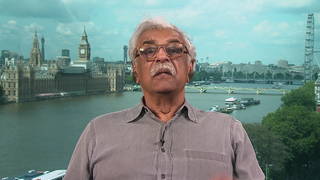