Prime Minister Theresa May has announced the threat level in the U.K. will be raised from severe to critical, indicating another attack may be imminent following the suicide bombing that killed 22 people and injured dozens at a concert in Manchester Monday night. The bombing marked the deadliest terror attack on British soil since the 2005 London bombings. It came just weeks before Britain’s general election. In Part 2 of our conversation, British political commentator Tariq Ali talks about Britain’s upcoming general election and what impact Monday’s suicide bombing may have on the campaign.

AMY GOODMAN: This is Democracy Now!, democracynow.org, The War and Peace Report. I’m Amy Goodman. With this web exclusive, we continue our coverage of Monday’s suicide bombing in Manchester, Britain, that killed 22 people at a pop concert. We’re speaking to British political commentator Tariq Ali. The threat level has been raised to critical. What happens when the threat level is at critical? The British prime minister says possibly another attack is imminent, Tariq.

TARIQ ALI: Well, this is what they always say after a terrorist attack. Basically, it’s a precautionary measure. Its main—the main reason for this is largely psychological, Amy, in my opinion, rather than anything else. It’s to reassure the population, “We’re looking after you.” The shock has been great. Cities—Manchester is traumatized. People are worried. And raising the security level is little more than having soldiers and more policemen on the streets to show we’re doing something. I don’t see its significance as being greater than that.

I mean, don’t forget, we’re in the middle of an election campaign, which is due to take place over the—within the next two weeks, and the campaign has been fought quite vigorously by Jeremy Corbyn and the Labour Party. So this couldn’t have come at a worse possible time for any oppositional force in this country. And so, raising the security level is to—you know, “We’re a solid, stable government.” Any government and previous governments have done the same thing. I remember Tony Blair, to show the country what a serious threat Iraq was, sent tanks outside Heathrow to show that, you know, we are extremely worried, we are guarding the country. So a lot of this is basically propaganda.

AMY GOODMAN: I wanted to turn right now to Labour leader Jeremy Corbyn speaking after the Manchester attacks at the Ariana Grande concert. This is Tuesday.

AMY GOODMAN: So that’s Labour leader Jeremy Corbyn. Tariq Ali, you know him well. Talk about the significance of this election, what’s at stake, who’s running.

TARIQ ALI: The significance of this election is this, Amy, that for the first time in years we have a Labour leader who believes in policies that are completely hostile to neoliberalism, to the system created by Reagan and Thatcher. And even Conservative politicians are realizing this and saying, “No, we are not part of the Thatcher-Reagan system.” Theresa May is making all sorts of noises: “We care about the working class.” But this is largely in response to a campaign where Jeremy has been campaigning in different parts of the country, and the crowds have been huge. It’s a very lively campaign, several thousands of people turning up to hear politicians speak. And the program he’s fighting on is a radical social democratic program, taking the railways back into public ownership, making higher education free again, defending the National Health Service—nothing very new, but something regarded as contraband during the Thatcher, Blair and Brown years in this—and the Cameron years in this country. So, it’s an exciting campaign.

Just 10 days ago, the sections of the extreme-right media, Rupert Murdoch’s rags in this country, started campaigning against Corbyn, saying that Jeremy Corbyn and John McDonnell, the shadow chancellor, finance minister, of this country, were both IRA, Irish Republican Army, supporters and terrorists. I mean, this is a complete and total slander. This campaign was started about eight or nine days ago, and then we have this big attack in Manchester. And some of these newspapers are now alleging this attack is because Jeremy and John McDonnell were IRA supporters. It’s totally and completely grotesque. So if any of you think that the British media is somehow better than its equivalents in the United States, abandon that view completely. It is the same, if not worse, on occasion. So, we are—

TARIQ ALI: We are worried as to—

AMY GOODMAN: For people to understand, it was the British prime minister, Theresa May, who called early elections. If Jeremy Corbyn—if the Labour Party were to take the most seats, he would become the prime minister.

TARIQ ALI: If the Labour Party got the most seats, or even if the Conservatives got the most seats but didn’t have an overall majority, it’s perfectly possible for Jeremy Corbyn to make a bloc with, say, the Scottish National Party, whose policies on many issues are not so different, and, if there are any Greens elected, with the Greens, and form a government. This is perfectly possible, if the right wing of Corbyn’s own party let him do so. But otherwise, he would need to be the largest party to have some chance of forming a government with the support of minority party.

Theresa May called the election. She thought she was more popular than she was. And she said, “Let’s have a snap election. Let’s increase my majority. And let’s consign Jeremy Corbyn and his politics to the dustbin forever.” That was the plan. But over the last 10 days, Corbyn has slowly but surely been rising in the opinion polls. Young people are being mobilized. Today is the last day to register to vote, and I think many people will do it. But, of course, this bombing acts as a huge block. It alienates people. It makes people passive, saying, “What’s the use? Everything’s awful,” etc.

AMY GOODMAN: Tariq Ali is a political commentator, historian, activist, filmmaker, author and editor of the New Left Review. This is Democracy Now! To see Part 1 of our conversation, go to democracynow.org. I’m Amy Goodman. Thanks for joining us. 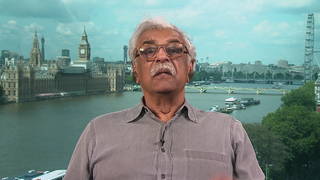