Last month here in Toronto, journalist Desmond Cole was told by his editor at the Toronto Star that he had violated the newspaper’s rules on journalism and activism, after Cole protested a Toronto Police Services Board meeting. In his writings, Cole has long criticized the controversial police practice of carding—stopping, interrogating and collecting data on individuals without probable cause, a practice which disproportionately targets people of color in Canada. In 2015, he wrote a widely read piece for Toronto Life titled “The Skin I’m In: I’ve been interrogated by police more than 50 times—all because I’m black.” For more, we speak with Desmond Cole, former columnist for the Toronto Star and now a freelance journalist, activist and radio host on Newstalk 1010.

AMY GOODMAN: We are broadcasting from, well, the stadium where the Blue Jays play. That’s right, we’re in Toronto, Canada, at the SkyDome. Juan?

JUAN GONZÁLEZ: “I choose activism in the service of Black liberation.” Those are the words of our next guest, Desmond Cole, explaining why he left his bimonthly column at the Toronto Star. Last month, Cole protested a Toronto Police Services Board meeting and was subsequently told by his editor at The Star that he had violated the newspaper’s rules on journalism and activism. In his writings, Cole has long criticized the controversial police practice of carding—stopping, interrogating and collecting data on individuals without a probable cause, a practice which disproportionately targets people of color in Canada. In 2015, he wrote a widely read piece for Toronto Life titled “The Skin I’m In: I’ve been interrogated by police more than 50 times—all because I’m black.” Last month, Cole brought a police board hearing to a halt by refusing to leave the speaker’s chair until all information gathered from carding was destroyed.

DESMOND COLE: I stand up for the children of this city that you guys refuse to protect, particularly the black children. And I plan to stand here in protest until you commit—until you commit today, here and now, to restricting the police having our information going forward. You’re going to ruin another generation of children’s lives, and I’m not going to allow you to do it.

ANDREW PRINGLE: Thanks, Desmond. … Well, please have the courtesy to let the other people on the list—

ANDREW PRINGLE: —speak. Now, we can’t solve that. So let’s—let’s adjourn the meeting for 10 minutes, please. And, board members?

AMY GOODMAN: So, you were just listening to Desmond Cole derailing a Toronto Police Services Board meeting last month. Shortly afterwards, Desmond was called into the Toronto Star's office and told his protest had violated the newspaper's code of conduct. The newspaper’s Policy and Journalistic Standards Manual states, quote, “It is not appropriate for Star journalists to play the roles of both actor and critic.” Desmond Cole says this is not the first time he has been reprimanded by the newspaper. Last year, the chair of Torstar Corp., who was also serving as as The Star’s acting publisher at the time, asked to meet with Desmond. The chair, John Honderich, reportedly told Desmond he was writing about race too often, and advised him to diversify his topics.

Well, Democracy Now! invited John Honderich or a spokesperson for the Toronto Star to join us on the show. They declined our request. The newspaper’s director of community relations and communications pointed us to a column by the paper’s public editor, Kathy English. The column is headlined “Journalists shouldn’t become the news.”

Well, for the remainder of the hour, we’re joined by Desmond Cole, former columnist for the Toronto Star, now a freelance journalist, activist, radio host on Newstalk 1010.

Desmond, welcome back to Democracy Now!

DESMOND COLE: It’s nice to see both of you.

AMY GOODMAN: We last spoke to you in CBC’s studios when we were in Toronto. You were a Toronto Star columnist. So talk about what happened.

DESMOND COLE: Well, I think you described it very well. I have been a columnist—had been a columnist since about September of 2015. And there was no surprise to the newspaper that I was engaging in activism. In fact, the Toronto Star's reporters have been covering my activism since I became a columnist at the paper, and have been describing me as a freelance journalist and an activist. The idea that I broke their policy is nonsense, because the Toronto Star's policy is inconsistent, at best, and is not applied to other writers and columnists of that same paper that also engage in different forms of activism.

My analysis of what happened to me is that because I am working in the service of black liberation, because I’m fighting white supremacy, and because that requires me to engage in acts of civil disobedience, as I did at the police board meeting, that John Honderich, whom you mentioned, became too uncomfortable with my actions to feel comfortable supporting me, going forward, as a columnist. So they made up this nonsense about the idea that I was breaking the rules of the newspaper, rather than simply saying, “We’re uncomfortable.” Perhaps John Honderich and others at The Star were receiving a lot of phone calls, I imagine. I disrupted a Police Services Board meeting at which the mayor of the city of Toronto, John Tory, was present. I acknowledge that things like that make our government and many of our business and, you know, even newspaper leaders very uncomfortable. That’s their problem, though.

For John Honderich to have come to me a year ago and to try and interfere in my content as an opinion writer in the city, that was ludicrous. And that’s really the story here, is: Why is one of the most powerful people at the Toronto Star coming to me and trying to divert my work and trying to suggest that I should be talking about this or that? That wasn’t, in my view, his role. And he was really out of line also because I’ve brought a lot of attention to issues that The Star has been covering for years, and done it successfully. So, to me, this is about one very powerful person on a power trip and the very inappropriate actions he was taking, more than a year ago up until now, to try and silence me.

JUAN GONZÁLEZ: Well, what you raise about the publisher, as someone who worked—has worked in commercial media for 40 years, I can’t remember ever a publisher of a newspaper—and I was a staff columnist, not just, as you were, a freelance columnist—having a meeting with one of the columnists or one of the reporters to discuss the content of their work. It doesn’t happen.

DESMOND COLE: And, believe me, he tried—John Honderich, at that meeting, tried to make it seem like it was normal for him, in his position, to come to somebody who was writing once a week to have this big conversation about my content. He tried to make that seem like that was a normal thing. And certainly, the media in Canada have been very afraid to pick up on that thread of this issue. They have preferred to have this really ridiculous faux-existential conversation about “What does this mean for journalism? What is journalism anyway? Can one be a journalist and an activist?” This has all diverted from the fact that I took a stand against police keeping records on innocent people, because everyone, up to the mayor of our city of Toronto, has said that that practice is illicit and has to stop, but they have not followed through. So, all of these conversations about my tactics as an individual to try and silence that, these are classic diversionary tactics when black people take a stand.

AMY GOODMAN: You have said, Desmond, that you’ve been stopped over 50 times. You can just throw that out of your ear, yeah.

DESMOND COLE: —or followed in my car or, you know, questioned and asked for information. That’s in Kingston, Ontario, where I went to university. That’s here in Toronto. That’s in different parts of this province. And even when I leave the province of Ontario, no matter where I am in this country, it’s extremely hard as a younger black person not to attract the attention of police. And I’m terrified when these interactions happen. But again, the reason we’ve been having this conversation about carding in Toronto—

AMY GOODMAN: And explain what carding is.

DESMOND COLE: Yes, and, again, you guys did a great job in your intro. It is the practice of not only stopping people, civilians who are not suspected of any crime, but documenting your interactions with them and keeping them in a database, so keeping noncriminal records of civilians. This has been a rampant practice in the city of Toronto. There are very, very few black families and individuals that this practice has not touched in one way or another. More recently, we’ve been talking about how even police stationed in our schools are engaging in surveillance against students, are collecting information on students as so-called school resource officers who are posted in our high schools, when they’re supposed to be building relationships, as they like to put it, with our kids. So, these records, these noncriminal records, can follow people when they try to apply for a job, when they try to apply for school positions that require background checks. And they create a kind of a picture of somebody who’s doing something wrong, who’s just trying to live in their community.

AMY GOODMAN: We’re going to do Part 2 in a moment and ask you: What are you going to do right now? What would you be writing about? That’s Desmond Cole. We’re in Toronto, Ontario, in Canada. 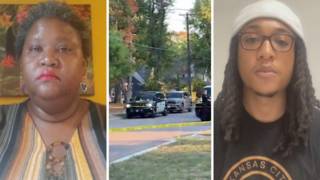