Voters in France head to the polls Sunday for a presidential election that pits former investment banker Emmanuel Macron against far-right politician Marine Le Pen. On Thursday, Macron won the support of former U.S. President Barack Obama, who urged French voters to reject the politics of fear. Le Pen has campaigned on an openly xenophobic and racist platform, and faced protests Thursday as she campaigned at a trucking company in Brittany. “They have to choose between an openly racist candidate like Marine Le Pen, who promises the supremacy of whites and Christians, regardless of our constitution, of our tradition of separation between church and the state, and, on the other hand, you have Emmanuel Macron, who appears to be this young guy who sends a signal of, yes, it’s going to be about empowering people through entrepreneurship,” says our guest in Paris, Yasser Louati, a French human rights and civil liberties activist and researcher. “The problem is that his version of society is that you run a country like you run a company. And the problem is that nothing in his program actually goes alongside the working class.”

AMY GOODMAN: This is Democracy Now!, democracynow.org, The War and Peace Report. I’m Amy Goodman. In France, voters head to the polls Sunday in a presidential election that pits former investment banker Emmanuel Macron against far-right politician Marine Le Pen. Macron on Thursday won the support of former U.S. President Barack Obama, who urged French voters to reject the politics of fear. Le Pen, who has campaigned on an openly xenophobic and racist platform, faced protests Thursday as she campaigned at a trucking company in Brittany. Protesters shouted “Out you fascists!” and threw eggs at Le Pen, hitting her once in the head. Le Pen has called for France to crack down on immigration and leave the European Union.

For more, we go to Paris, where we’re joined by Yasser Louati, French human rights and civil liberties activist and researcher.

It’s good to have you with us, Yasser. Can you talk about the significance of this runoff election this weekend?

The situation actually illustrates the normalization of racist rhetoric in France for the past 35 years. You know, in 2002, there was huge demonstrations against the arrival of Marine Le Pen’s father in a second round of the election. But today, public opinion has been prepared to see her arrive in the second round, and that’s why you don’t see that many mass movements against her very presence.

But that is not happening out of, you know, a coincidence. Racism, especially Islamophobia, in France is a point of convergence from the far left to the far right. So, they can disagree on anything, but when it comes to stigmatizing, singling out the Muslim population of France, everybody agrees. So, another example is that the three openly racist candidates—Marine Le Pen, François Fillon and Dupont-Aignan—altogether won 46 percent of the vote during the first round. So, regardless of whether Marine Le Pen makes it to the Élysée presidential palace, her ideas already won.

And a signal was sent to us last summer during the burkini hysteria, which actually rooted the campaign on identity politics. And if you look at the last presidential debate that happened two days ago, they spoke about identity politics, but socioeconomic policies were very vague. Marine Le Pen spoke about shutting borders and protecting France from Europe, without saying how she will prevent a recession. And Emmanuel Macron said, you know, he wants to launch a nation of startup companies. And in my humble opinion, that will definitely decimate the working class behind the cool attitude of startup companies. Why? Because they will be dependent on what I call—or they will be stuck in what I call a digital proletariat. You will huge corporations online making, you know, thousands and millions or people sell their labor without much benefits.

YASSER LOUATI: Well, it’s, again, the choice of the lesser of two evils. You saw that in America between Donald Trump and the highly unpopular Hillary Clinton. And today that’s what is being imposed upon the French. They have to choose between an openly racist candidate like Marine Le Pen, who promises the supremacy of whites and Christians, regardless of our constitution, of our tradition of separation between church and the state, and, on the other hand, you have Emmanuel Macron, who appears to be this young guy who sends a signal of, yes, it’s going to be about empowering people through entrepreneurship. The problem is that his version of society is that you run a country like you run a company. And the problem is that nothing in his program actually goes alongside the working class.

Another point—and that’s a huge trap being set up by neoliberals all around the world. They come and tap you on the shoulder and say, “Well, racism is evil.” In our case, in France, “Islamophobia is evil.” The problem is that, what’s the point of saying Islamophobia is evil, if it is to implement a neoliberal agenda that will actually feed into racist rhetoric by putting people into more competition? So, right now, the French are being asked to choose between the lesser of two evils, but either choice won’t make the situation better. And that’s why my—the analysis that I see is that the immediate urgency is to block Marine Le Pen from becoming president, but the very next one is actually to make the country ungovernable for Emmanuel Macron, because we have the upcoming parliamentarian elections. And given his status and his lack of alliances, he will depend on the existing MPs in Parliament. And that’s a signal for independent candidates to rush to the ballot, register as candidates and carry forward with a more progressive agenda.

AMY GOODMAN: Activists with Greenpeace unfurled a giant banner on the Eiffel Tower in Paris Friday emblazoned with France’s national motto and the hashtag #RESIST. This is Jean-François Julliard.

JEAN-FRANÇOIS JULLIARD: [translated] Today’s action is this banner deployed behind me under the Eiffel Tower with the values of our national motto, “Liberty, equality, fraternity.” The idea was to remind people the importance of these values two days before the presidential election and to say that today the biggest threat to these values is the potential election of Marine Le Pen and the National Front.

AMY GOODMAN: That was Jean-François Julliard. Finally, among the issues that Marine Le Pen has raised, the far-right xenophobic candidate, was that the French did not round up Jews in Paris and put them in the stadium. Yasser Louati, you’re an Arab-French human rights activist. The response to this, the denial of a well-known fact about the Holocaust?

YASSER LOUATI: When I first heard that, I was—you know, it was beyond words, and it caused deep revulsion. The French police that we have today was born under the Maréchal Pétain, who collaborated with the Nazis and who sent the kids of France to the death camps. That same government is the government that allowed high state officials to carry these policies. And after the collaborationist government of Maréchal Pétain, who rounded up the Jews, after that government fell, they were not sent to jail. Actually, they continued with their careers within the French apparatus.

What Marine Le Pen is trying to do is to always whitewash the crimes of France. As a matter of fact, while white Christian France was collaborating with the Nazis and selling out to Hitler, blacks and Arabs and Muslim soldiers were chasing Nazis around and freeing the country, starting from the island of Corsica all the way up to Paris. But that was also a strong signal to the Zionist organizations in France, who also made clear that Marine Le Pen was now approachable by turning away from anti-Semitism and heavily investing into Islamophobia. But she had to make that declaration in order to reassure her ideological bases by saying that France was not guilty.

France was guilty of collaborating with the Nazis and for sending its own Jewish kids to the death camps. There is no question about it. Historians agree on that. And now Marine Le Pen just tries to minimize the implications. It’s like the same people who tell you, “Well, colonization brought some goods into Africa.” No, it did not. As long as you have a domination of one group over another and you legitimize the killings of innocents because they happen to be from a different ethnic background or religion, that makes you a criminal. And one last point is that Marine Le Pen herself’s party is actually the direct inheritance or the direct legacy from the people who rounded up Jews in the 1940s.

AMY GOODMAN: Yasser Louati, I want to thank you for being with us. We’ll continue to follow what happens over the weekend.

YASSER LOUATI: Thank you for having me.

AMY GOODMAN: French human rights and civil liberties activist and researcher, speaking to us from Paris.

This is Democracy Now! When we come back, we’ll be speaking with the head of the NAACP about what has happened in Louisiana with the killing of Alton Sterling and the Justice Department closing the case without indicting the police officers. Also, a teenager killed in Dallas, we’ll get the latest. And we’ll speak with Carol Anderson, who just won a major literary award. She’s a professor at Emory University. Her book is called White Rage. Stay with us. 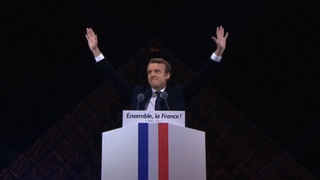