Former investment banker and political centrist Emmanuel Macron has been elected president of France in a landslide victory over far-right candidate Marine Le Pen. Macron won over 66 percent of the vote. Even though Le Pen lost, she received nearly 7 million votes—more than any other candidate in the history of her party, the anti-immigrant National Front. Le Pen had campaigned on an openly xenophobic and racist platform, calling for France to crack down on immigration and leave the European Union. Macron ran on a pro-trade and EU agenda. We speak to the French human rights and civil liberties activist and researcher, Yasser Louati. He recently wrote an article titled “French Elections: Marine Le Pen or Emmanuel Macron? Hitler or UBER?”

JUAN GONZÁLEZ: We begin today’s show in France, where the former investment banker and political centrist Emmanuel Macron has been elected president in a landslide victory over far-right candidate Marine Le Pen. Macron won over 66 percent of the vote. Even though Le Pen lost, she received nearly 7 million votes—more than any other candidate in the history of her party, the anti-immigrant National Front. Le Pen had campaigned on an openly xenophobic and racist platform, calling for France to crack down on immigration and leave the European Union.

Macron ran on a pro-trade and EU agenda. He has never previously held elected office but served for two years as economy minister under President François Hollande. At 39 years old, Macron will become France’s youngest head of state since Napoleon. On Sunday night, Macron addressed thousands of supporters in front of the Louvre museum in Paris.

AMY GOODMAN: We go to Paris, where we’re joined via Democracy Now! video stream by French human rights and civil liberties activist and researcher Yasser Louati. He recently wrote an article titled “French Elections: Marine Le Pen or Emmanuel Macron? Hitler or UBER?” Well, that was before the election.

Welcome back to Democracy Now!, Yasser Louati. Can you talk about what has surprised many, the very large victory of Macron?

YASSER LOUATI: Hi, Amy. The victory of Emmanuel Macron is—you know, tastes very bitter to the French voters, because they were pushed towards the voting booth with the National Front knife under their throat—either fascism or neoliberalism. And, of course, Emmanuel Macron got 65 percent of the votes. But compared to what Jacques Chirac got in 2002 against Marine Le Pen’s father in 2002, that was 82 percent. So, the victory is really way below what was accomplished 15 years ago. In the latest poll from the political department of the Sciences Po, Paris, which is, you know, one of our notorious political science schools, 60 percent of Emmanuel Macron’s voters do not ideate with his program but just voted because they had no other alternative. The abstention rate got a rate, 16 million people. And Marine Le Pen actually got beyond the 7 million stated by Juan, but actually 11 million people, which means identity politics and xenophobic and racist rhetoric is here to stay. On top of it—excuse me—on top of it, a latest poll shows that 61 percent of the French do not want Emmanuel Macron to have a majority in Parliament, which means that a war is now being waged in order to gain a majority in Parliament. And Emmanuel Macron himself will be isolated and will depend on the game of alliances. That’s for the figures of his victory.

As for the speech of last night, to tell you the truth, I was listening in complete dismay, because he spoke about the right of the oppressed, yet we never heard Emmanuel Macron stand up against the current state of emergency, which is still in effect. When he was asked about Palestine, he said standing for the right of Palestinians to have an independent state will be, quote, “taking sides.” We haven’t heard him speak about the nine wars in which France is being engaged. And the list goes on. So, what happened last night is only a one-night relief from Marine Le Pen accessing power, but a battle has just begun today for the conquest of Parliament.

JUAN GONZÁLEZ: And, Yasser Louati, what does this election say about the future of the established political parties in France, given that both candidates came from outsider parties?

YASSER LOUATI: Well, the fact that Emmanuel Macron managed to make it in 18 months from being nobody to becoming a president is a clear statement that our political system is completely bankrupt. It has capsized. There is open defiance towards politicians. People don’t believe in them. It is either voting for the extremes or abstaining, as mentioned earlier. And the fact that he managed to make it to the first and then second round was also a testimony that he did not win because he was that bright or that good, but because all the other candidates were—excuse my language—let’s say they were poor and not up to the task here. So, that’s—you know, he just managed to be there at the right time and doing the right thing.

So, France does not need an umpteenth new president; it needs a new republic, a new constitution, a new organizing of institutions and to—and to actually get rid of the colonial legacy, which makes France still identify itself as a white country only. And when, for example, you hear the global press speaking of Marine Le Pen being xenophobic and against immigration, well, the black and brown and Muslims are not immigrants. They have been there for three, four, five generations. But they are still perceived as foreigners, which means there is, on top of the social war, a racial war in order to maintain the hegemony of white French people.

MARINE LE PEN: [translated] With this historic and massive result, French people designated the patriotic and republican alliance as the first opposition force to the program of the new president. I call on all patriots to join us to take part in the decisive political fight that is starting tonight. More than ever, in the forthcoming months, France will need you. Long live the republic. Long live France.

AMY GOODMAN: So that was Marine Le Pen. And, Yasser Louati, for people who aren’t familiar with French politics, not only talk about what she represents, and still the rise of her party, but why legislative elections are so important, that are coming up, because Macron may have won, but where is his party’s representation in Parliament?

YASSER LOUATI: Well, that’s his biggest weakness. He came forward with only what he calls a movement, which means no established political party with a clear leadership. So now he’s just gathering around him all the people who are either opportunistic and jumping ships from the collapsed mainstream right- and left-wing parties, and, on the other hand, now he’s facing the challenge of having his own majority.

And Marine Le Pen managed to also make her party so acceptable that people from the mainstream right party have actually colluded with her and were ready to build alliances, which means, with the collapse of the Socialist Party on the left and the Republican Party on the right, Marine Le Pen will definitely get new supporters, make alliances with people fleeing mostly the Republican Party, because they ideate with her agenda on identity politics, anti-European, anti-immigration, and, of course, this populist rhetoric to get more credibility, saying, “The establishment has failed you, but I will stand with you and defend you against them.”

One piece of information, which is quite useful to know who Marine Le Pen really is, she is appealing to the working-class, yet Madame Le Pen was born and raised as a bourgeois woman. She is a millionaire who owns multiple penthouses, grew up in a castle in the most upscale western neighborhood of Paris. And beyond the patriotic call of her party, she has been heavily funded by Russian oligarchs. As a matter of fact, an investigation is ongoing by various journalists on Russian mobsters financing Marine Le Pen. More news to follow, of course.

AMY GOODMAN: Yasser Louati, we want to thank you very much for being with us, French human rights and civil liberties activist, speaking to us from Paris. 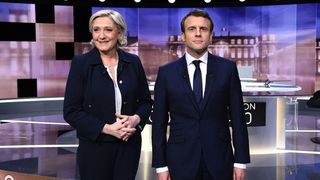