NAACP President and CEO Cornell Brooks responds to the case of 15-year-old Jordan Edwards, who was killed Saturday in the Dallas suburb of Balch Springs by police officer Roy Oliver, who shot him in the head while he was in a car leaving a party. Oliver was fired on Tuesday. “This is a moment in our democracy where we have got to not only call for reform, but demand reform,” Brooks says. “That means not only lawyers in the courts pursuing charges, pursuing prosecution of bad police officers, but also means activists in the streets engaging in serious civil disobedience, serious disruption of business as usual, and literally bringing this system of police misconduct and brutality to a grinding halt.”

AMY GOODMAN: I want to turn to the case of 15-year-old Jordan Edwards in Texas.

AMY GOODMAN: He was killed on Saturday in the Dallas suburb of Balch Springs by police officer Roy Oliver, who shot the black teen in the head while he was in a car leaving a party. Oliver was fired Tuesday. This is S. Lee Merritt, an attorney for Jordan Edwards’ family, speaking at a news conference.

S. LEE MERRITT: This incident happened just Saturday. The family is extremely raw. The community is extremely raw. And they’re demanding transparency. And we, on behalf of the family, are demanding action—action from the Balch Springs Police Department, action from the Dallas County District Attorney’s Office—and change. We are declaring war on bad policing. This has happened far too often. We are tired of making the same rhetorical demands, of having the same hashtags.

AMY GOODMAN: So, you went, Cornell William Brooks, to Dallas—

AMY GOODMAN: —right after this happened. Talk about what’s happening there.

CORNELL WILLIAM BROOKS: What’s happening is you have a funeral—I should say, you have a family that requested that marches and demonstrations not be done until after the funeral. They are grappling with most incomprehensible grief. And yet you have a larger community, beyond the family, also grieving. Schoolmates are grieving. We conducted a prayer vigil with the family’s attorney present, an interfaith coalition—imams, a rabbi, Christian clergy—present, and millenials. And we conducted this prayer vigil to train young people in civil disobedience and nonviolent direct action, but also to pray for the family and pray for the community.

What we know is this: Where we have seen young black and brown lives taken at will and at whim of the police, in case after case after case across this country, it is only because of public pressure that these cases get any attention and any pretense of investigation, anywhere in the country. So we have to keep the pressure up. We have to continue to make these cases and these names known.

What we notice in the community, obviously, is the fact that people are grieving. But beyond that, we also notice that family—we notice that community members are demanding that we not go through this same cycle of lives lost, hashtags created, police offering explanations that don’t explain, and investigations don’t lead to anywhere, or charges that don’t lead to convictions. We’ve got to break this ugly and vicious do-loop.

And so what the NAACP has done is that we went to this prayer vigil, but we are also talking about considering pursuing an independent investigation, hiring our own investigators, looking into this matter ourselves. This has been done before. It is an option. It is a way of bringing evidence forward. In Ferguson, we worked with the prosecutors to encourage people to come forward. But perhaps we need to conduct our own investigation to get people to come forward, to get them to speak about what happened here.

The point being here, Amy, is that we cannot continue doing business as usual, when business as usual is resulting in the death and destruction of black lives all across this country. And the fact of the matter is, in the last century, the NAACP brought an end to lynching. This lynching by those in blue with gold badges can be brought to an end in this century, if we, as a country, decide to do so.

Now, this decision to do so has to begin at the top. And that means our attorney general acknowledging—the Department of Justice acknowledging—the reality of this. You cannot add a blessing and a benediction to bad policing by saying you’re not going to use consent decrees, by saying you’re going to open up, re-examine consent decrees that have been agreed upon by the previous administration. You cannot say that consent decrees and holding police officers accountable leads to crime, as opposed to to decreasing crime and making both police officers and communities safer. This we know.

This is a moment in our democracy where we have got to not only call for reform, but demand reform. And that means not only lawyers in the courts pursuing charges, pursuing prosecution of bad police officers, but also means activists in the streets engaging in serious civil disobedience, serious disruption of business as usual and literally bringing this system of police misconduct and brutality to a grinding halt. It has to happen.

AMY GOODMAN: Cornell, were you—were you arrested once or twice in Senator Sessions’ office, protesting his—

AMY GOODMAN: —in Alabama, protesting him becoming the attorney general of the United States. I want to thank you, Cornell William Brooks, for joining us, head of the NAACP. 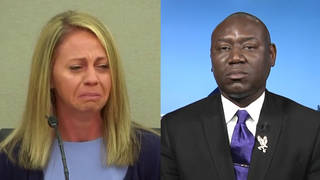