We are broadcasting from Atlanta, Georgia, home to Emory University, and we speak with Carol Anderson, chair of Emory’s Department of African American Studies. Her recent book, “White Rage: The Unspoken Truth of Our Racial Divide,” won the National Book Critics Circle Award for criticism.

AMY GOODMAN: We turn to another guest. We are broadcasting from Atlanta, Georgia, home to Emory University. And I want to bring into this conversation Carol Anderson, who’s chair of Emory’s African American Studies Department. Carol Anderson’s book, White Rage: The Unspoken Truth of Our Racial Divide, just won the National Book Critics Circle Award for criticism. Jurors called it, quote, “a searing critique of white America’s systematic resistance to African-American advancement.”

Carol Anderson, from that picture I saw of you winning the award, you were rather surprised. But the power of your book has not been lost on anyone. In these last minutes we have together, can you talk about the significance of what’s happening right now?

CAROL ANDERSON: Yeah. What we’re seeing right now is the penultimate in white rage. We had a black president. We had African Americans and Latinos coming out in scores voting for the first time, participating in this democracy. And the response has been a legislative and judicial—given the Shelby County v. Holder decision by the Supreme Court, gutting the Voting Rights Act—response to, in fact, undermine and undercut that black advancement.

What we now have is Donald Trump, because it is with voter suppression, given felony disfranchisement in Florida, given the chicanery in North Carolina, the chicanery in Wisconsin with all of the voter IDs, back and forth, that in fact led to this very narrowed victory that put a white nationalist regime in power in the United States. And from there, you then get these policies, such as Jeff Sessions, the attorney general, who happened to greet Donald Trump surrounded by women in antebellum dresses, to give you a sense of what “Make America great again” means to them.

CAROL ANDERSON: Yes. And again, that is law and order. That is pure dog whistle from the Nixon years, from the Reagan years. And what that has led to has been the mass incarceration of African Americans and Latinos. What it has led to is the undermining of the Civil Rights Act of ’64 and the Voting Rights Act of ’65.

AMY GOODMAN: What do you say, Professor Anderson, to those—I mean, there are those who say that Donald Trump is an outright racist, white supremacist, white nationalist. There are others who say he’s just speaking his mind. He tosses political correctness. What do you say?

CAROL ANDERSON: I say that’s a load of hooey. And what I mean by that is, he started his campaign by getting the groundwork with the “birtherism,” which was sheer racism, demanding to see Obama’s birth certificate. And then he launches his campaign by saying Mexicans are rapists and criminals. Now,
what would have normally have led somebody to be distanced from that—or just say, “No, we want no part of that”—in fact, it drew that GOP base in to a depth of fervor where the latest polls have shown that what was driving his base was not all of this economic anxiety that pundits talked about, but was the increasing diversity of America, the fact that America was becoming more black and more brown. And so, his white base said, “We can’t have that. We have got to somehow secure the power and the resources of the United States in our hands alone.”

AMY GOODMAN: So, how does this—your book came out before Donald Trump was inaugurated.

AMY GOODMAN: How does this presidency underscore what you have found?

CAROL ANDERSON: It underscores it beautifully, because you see all of this masking in terms of language. So, for instance, let’s take the healthcare bill that Trump pushed forward, the one that just passed the House. When you begin to really look at it, it goes after women, it goes after the poor, and it goes after black people. It goes after those who are getting out of their place. But it’s doing so in this really innocuous language of democracy, that this is going to bring about greater options and greater choice, when in fact what it’s going to do is impoverish and sicken millions upon millions of Americans and have a massive transfer of wealth to the top 400 families—under the guise of democracy. That’s white rage.

AMY GOODMAN: Professor Carol Anderson is chair of the African American Studies Department at Emory University. And she is author of the book White Rage: The Unspoken Truth of Our Racial Divide, which just won the National Book Critics Circle Award for criticism.

And that does it for our show. By the way, we have openings for a video news fellow and many internships. Check our website, apply immediately at democracynow.org. 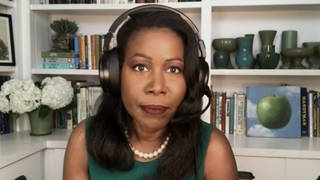