Nearly 200 Democratic congressmembers are suing President Trump, accusing him of violating the Emoluments Clause of the Constitution by accepting millions of dollars in payments from foreign governments to his companies while serving as U.S. president. The attorneys general of Maryland and D.C. have filed a similar lawsuit against the president. For more, we speak with the longest-serving member of Congress, Democrat John Conyers of Michigan. He has served in Congress since 1965.

AMY GOODMAN: We turn right now back to Capitol Hill, which remains in shock after House Majority Whip Steve Scalise of Louisiana and four other people were wounded Wednesday when a gunman opened fire at a baseball field in Alexandria, Virginia, the lawmakers practicing for a charity congressional game that will take place tonight.

NERMEEN SHAIKH: We’re joined by the longest-serving member of Congress, Democrat John Conyers of Michigan. He’s served in Congress since 1965.

AMY GOODMAN: Congressman Conyers, welcome to Democracy Now! It’s great to have you back with us, but on a very sad day. Right now your fellow congressman, Steve Scalise, is in critical condition as a result of this shooting. The game will go on tonight, with Republicans and Democrats standing together. But your thoughts today?

REP. JOHN CONYERS: Well, I am deeply disturbed by Steve Scalise’s problems. And we are all praying for his speedy recovery and hope that this will all soon be past.

AMY GOODMAN: Congressman Conyers, let’s explain what it is that you’re talking about, since no one knew what the word “emoluments” was anyway. But it involves this lawsuit that you’re involved with against President Trump. You and nearly 200 congressmembers—

AMY GOODMAN: —from the Senate and the Congress, 196 overall, are suing President Trump, accusing him of violating the Emoluments Clause of the Constitution by accepting millions of dollars in payments from foreign governments to Trump’s companies while serving as U.S. president, the lawsuit alleging Trump has accepted foreign emoluments, payments, which benefit him directly, without going to Congress first to get its consent. I want to turn to Elizabeth Wydra, who is president of the Constitutional Accountability Center, which filed the lawsuit on behalf of you and the 195 other members of Congress. This is what she says.

AMY GOODMAN: Among the violations cited in the lawsuit, Trump accepting intellectual property rights when he was granted trademarks by the Chinese government, and accepted payments from foreign governments by leasing space in his properties and placing diplomats in his hotels—representatives of Saudi Arabia, Turkey and Kuwait have all stayed at Trump International Hotel in D.C., which is located right near the White House—the lawsuit involving more congressional plaintiffs than any legal action ever taken against a president. Congressmember John Conyers, you are one of the leaders in this lawsuit. Why?

REP. JOHN CONYERS: Well, because it’s simply a constitutional violation that’s pure and simple, Amy. This is something that we can’t sit by and let happen as if it doesn’t matter. It does matter. And it’s not complicated or complex or anything else. And that’s why we have so many congressmen and senators working with us on it.

NERMEEN SHAIKH: And, Congressman Conyers, can you explain why it’s so significant that you say that Trump has violated the Emoluments Clause? Why is that so important?

REP. JOHN CONYERS: Well, it says that emoluments are money, benefits or other awards that can’t be used in the legislative process. Without the Emoluments Clause, Amy, the government and the lawmakers are subject to all kinds of offers, bribes, inducements. And so it’s really a waste of the democratic process if we don’t do something about it. And so, that’s why we are. We’ve got 160 congressmen and 30 senators, as well, all joined with us.

AMY GOODMAN: Now, so far, the 196 of you—you and Senator Blumenthal of Connecticut are leading the charge here in this lawsuit—are all Democrats. Among others, the president’s spokesperson, Sean Spicer, has said that these attacks on Trump around the Emoluments Clause are all partisan. Will any Republicans be joining your ranks in this lawsuit?

REP. JOHN CONYERS: We’ll find out today, because we’re inviting them to come in. We didn’t want to get in—we didn’t want to start off with a debate about what provisions should be allowed, what emphasis and how this should be written. We decided to just start with the people that we knew would join immediately. And now we’ll be working on Republicans. And we want them to come in. We hope that they—that some of them do. And I think a few of them will.

AMY GOODMAN: Well, it’s an honor to have you with us, Congressman John Conyers, representing Michigan’s 13th Congressional District, which includes Detroit, the current ranking member and former chair of the House Judiciary Committee. Thank you so much for joining us from the Capitol.

In a moment, when we come back from break, we’ll be joined by your colleague, by Barbara Lee, to talk not only about the shooting that’s taken place—she also has joined this lawsuit—but also what President Trump is expected to do tomorrow in Miami, and that is to curtail the opening of Cuba. We ask you to stay with us. We’ll be back in a minute.

Rep. Barbara Lee on Shootings: We Must Reduce the Hate in This Country

NEXTRep. Barbara Lee on Shootings: We Must Reduce the Hate in This Country 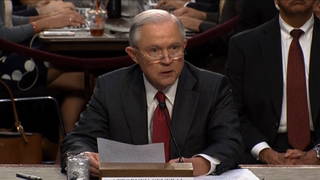