As we continue to look at Tuesday’s special election in Georgia, we speak to Katrina vanden Heuvel, editor and publisher of The Nation and columnist for The Washington Post.

AMY GOODMAN: This is Democracy Now!, democracynow.org, The War and Peace Report. I’m Amy Goodman. Senate Republicans have announced plans to finally unveil the text of their draft bill on Thursday to repeal the Affordable Care Act. This comes after Democrats launched a flurry of motions, speeches, procedural maneuvers to bring the Senate floor to a halt Monday in order to protest the Republicans’ plan to push through new healthcare bill without any public debate. The Republicans’ bill would strip 23 million people of their health insurance, while giving billions of dollars in tax breaks to wealthy Americans. That’s the House bill. Republican Senators have been drafting the final version of the bill in secret, closed-door meetings. They’re pushing for a vote on the bill before July 4th recess. This is California Democratic Senator Kamala Harris.

SEN. KAMALA HARRIS: I remember when our colleagues across the aisle said the Affordable Care Act was being rammed down the American people’s throats in the middle of the night. Well, the ACA went, in fact, through 106 public hearings. It incorporated more than 170 Republican amendments. The whole process took an entire year. But this healthcare plan involves no hearings, no bill text and no transparency at all.

AMY GOODMAN: So, that’s California Senator Kamala Harris. A number of Republicans have also spoken out, from Utah’s Mike Lee to Arizona’s McCain to Senator Paul.

KATRINA VANDEN HEUVEL: Thank you, Amy. Well, let me just say about Georgia: Don’t overread. Don’t be demoralized. The Cook report, pretty acclaimed monitoring of congressional seats, just the other day said that, currently, 71 percent of congressional districts are competitive, I mean, that those could be won. You’re looking at how tough the Republicans had it to win in ruby red districts. I think it’s important, as John Nichols in The Nation did last week, to look down-ballot at a kind of resistance and renewal politics, where you’re witnessing in the 9th Assembly District in New York Christine Pellegrino; someone you’ve covered, Chokwe Lumumba, in Jackson, Mississippi; Larry Krasner is poised to be the next district attorney in Philadelphia, progressive, taking on the criminal justice system; [Natalie] Vowell in St. Louis. So I think we need to look down-ballot. And I think we need to understand how competitive the House races will be in light of the struggle of the Republicans to keep these ruby red districts.

AMY GOODMAN: Well, what about this issue of what Ossoff exactly represented, the critique that he didn’t push forward core platform issues like single payer, free tuition, steep tax—

KATRINA VANDEN HEUVEL: And Fight for 15. No, I mean, I think—I think it’s interesting, and I believe Nan Orrock spoke to Stacey Abrams, who may be the first woman, first African-American governor of Georgia, who launched her campaign on the eve of this race. She brought two pillars of the Democratic Party: Nina Turner, who’s been with Bernie Sanders; Jason Kander, who’s more on the Clinton side. But together they spoke to a new kind of majority you can build in Georgia, not pitting against the white working class—because, after all, it’s a working class—bringing together, in a majority-minority state soon, Latinos, African Americans, young people, women, white working class, working class, and finding a way to bridge those gaps and speak to the issues. I do believe you need a bold, inclusive, progressive agenda to speak to people. It is tough in different—you know, a Montana Democrat isn’t a New York Democrat. But there are core issues, which I would argue are neither right nor left, and if there’s turnout, passion and commitment, we know that many of these progressive big issues are majority issues. So I think that’s important, Amy.

I also think it’s important just to say that the media, you know, the way it overread this election, it became a massive horse race. And, you know, the money pouring in, the media attention, not looking at some of those down-ballot races I just spoke about, which also prefigure and augur a kind of politics in this country. And if you can link those local, state to the national, you can see some real energy in this country. And I think, you know, Nan Orrock, someone I greatly admire—The Nation has written about her—spoke well about what is left behind after this race, is an organizing energy. I’d implore people to be patient. Stamina is going to be needed, because we’re up against tough forces. And the money piece is brutal. And it’s a cliché, but it’s real—organized people versus organized money—though Ossoff brought in a lot. Let’s not forget, two-thirds, I believe, of his contributions were small donors. And I think that’s important, if we can build on a kind of public-financing, small-donor politics. 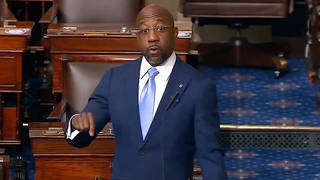