As Senate Republicans draft their repeal of Obamacare behind closed doors, we speak to The Nation’s Katrina vanden Heuvel about secret bills, single-payer healthcare and the media’s coverage. Her latest article is titled “On Trump, the Media’s Malpractice Continues.” In it, she critiques what she calls the mainstream media’s “prevailing focus on palace intrigue and White House scandals,” which comes at the expense of substantive policy coverage. Vanden Heuvel points to the Republican healthcare bill, drafted entirely in secret, as a prime example of important issues that have been overlooked.

StoryJul 27, 2018Noam Chomsky on Mass Media Obsession with Russia & the Stories Not Being Covered in the Trump Era

KATRINA VANDEN HEUVEL: I mean, I think it’s really important to continue to expose, as best we can, the stealth, the secrecy, that not only pervades the way the Republicans are handling this healthcare bill, but inside Washington generally, also rolling back—after the cratering of our economy eight, nine years ago, financial deregulations that are going to impact, hurt working people, poor people.

But I think they’re rushing it, Amy, for a very simple reason: They know how unpopular it is, not just with the American people, but with members of their own constituency. And they’re desperately trying to move something before they go back to the—you know, they head into the July 4th recess, because they’ve seen anger and passion in this country, and among Trump and the Republicans’ own supporters, who are going to be disproportionately hurt by a bill which is essentially a scam. I mean, transferring—at the heart of it is a trillion-dollar tax cut for the very richest.

I think it’s an opening for progressives to fight for Medicare for all. I mean, those who say it’s pie-in-the-sky ignore poll after poll, survey after survey, who show majority support of Medicare for all. And look at California. I mean, the state Senate has passed it. It’s heading to the state Assembly. It is doable. We should unleash our imaginations about what is possible in these times.

AMY GOODMAN: But they will release this on Thursday. Then the question is: Will it be, quote, “scored”? The Republicans in the House passed this before the—

KATRINA VANDEN HEUVEL: Scoring is supposed to come very quickly after. And how is it going to be—I mean, we’re looking at maybe marginal tweaks to that score. I mean, first of all, this affects one-sixth of the economy, this healthcare bill, and about 140 million people, families. And they’re rushing this through in secrecy? That is undemocratic, antidemocratic.

AMY GOODMAN: And yet, where is, for example, Bernie Sanders’ bill on healthcare, on Medicare for all?

KATRINA VANDEN HEUVEL: Or John Conyers, who’s been a stalwart for years. And those have sponsors. But that doesn’t get the attention. And I do think, in my column on media malpractice, I think what’s happened is, there has been so much focus on the scandals, the palace intrigues of the Trump administration, that it’s shameful, I believe in the course of two days, the major newspapers—Wall Street Journal, Washington Post, New York Times—didn’t give any front-page coverage to a healthcare bill that has the ability to reshape this country. So I think we need attention on substantive policy issues, and not just a sensationalism that gets ratings for a lot of these—

AMY GOODMAN: —Russia drumbeat. And you have to ask, when you’re looking at politics in Georgia, when people turn on television and they’re talking about the Russia cover-up, how this affects their lives. And your thoughts on this, as a Russia expert?

KATRINA VANDEN HEUVEL: Well, I mean, I think it’s just common sense. I mean, one needs to have coverage of the investigation into alleged collusion, the corruption matrix. But, you know, what about what’s going on in Flint, what’s going on in parts of this country? I think it is obscuring the real-life experience millions of people are living, and it is a hijacking of our airwaves and a dereliction of duty to issues that demand more attention. There’s no—you know, give it some coverage. But, you know, Chris Murphy tweeted, the day Jeff Sessions testified, give that 10 percent; 90 percent, people, focus on healthcare; media, focus on healthcare, focus on the toxic agenda that is being passed without enough attention. I think it’s a disservice to this country.

And I think it’s not only for ratings, but, you know, remember Les Moonves of CBS said at the beginning of the Trump—you know, I mean, he said the Trump campaign is great for our ratings, may not be great for America. Jeff Zucker of CNN just recently said same thing. They’re also very happy with the other war on the media, Amy, which is the deregulation agenda. The FCC is going to roll back cross-ownership, net neutrality. And I think that, too, is going to strip people of a democratic airwave, airwaves, which, as you’ve said many times, belongs to the people. So…

AMY GOODMAN: I want to go to your piece in the WashingtonPost.com where you say, “Thirteen male Republican senators have been meeting in private to draft a bill. No one else knows what’s in it. There have been no hearings, no public debate. Democrats and the public are completely locked out.” So this is Missouri Democratic Senator Claire McCaskill speaking on the Senate floor.

SEN. CLAIRE McCASKILL: When you say that you’re inviting us—and I heard you, Mr. Secretary, just say, “We’d love your support.” For what? We don’t even know. We have no idea what’s being proposed. There is a group of guys in a back room somewhere that are making these decisions. There were no hearings in the House. I mean, listen, this is hard to take, because I know we made mistakes on the Affordable Healthcare Act, Mr. Secretary, and one of the criticisms we got over and over again, that the vote was partisan. Well, you couldn’t have a more partisan exercise than what you’re—what you’re engaged in right now. We’re not even going to have a hearing on a bill that impacts one-sixth of our economy.

KATRINA VANDEN HEUVEL: I mean, that went viral. It’s powerful. I mean, it speaks to a basic truth, that this country’s citizens deserve and demand hearings. But do you remember the rank hypocrisy of Mitch McConnell? About the—you know, the Obamacare, ACA process was very deliberative. There were many hearings. There was the ability for Republicans to weigh in. Now he’s going on about, “Well, no, this is what happened with Obamacare.” BS.

But I think it demands massive citizen mobilization, Amy, to demand that there be hearings. And I think, because there may be some Republican fall-offs, because of the Medicaid issue primarily, some governors—you know, senators like what’s gone on in their states. If you can get this to the July 4th recess, your viewers and millions of others should be out there demanding hearings, demanding a slowdown of a process. We’ve seen this too often, too. I’m reminded of the PATRIOT Act, which passed in two or three days, and it later turned out no one had really read it. This is not the—this is not a functional democracy or representative government.

AMY GOODMAN: I mean, as all the emphasis is being put on the Russia investigation, Democrats hoping this could lead to the impeachment of Donald Trump, you have the dismantling of the administrative state right now at every level.

KATRINA VANDEN HEUVEL: You have the dismantling—absolutely. And listen, the focus on Russia, the obsession with Russia, is stymieing this government. I mean, it is creating dysfunction. But at the same time, it is stripping—you don’t have the oxygen to give to the attention—the attention that this deserves. And I think that should be where we now—witnessing what we’re witnessing with the way McConnell and the Republicans are ramming this through—by the way, which is not unusual. We’ve seen this, for—remember in North Carolina? The Republicans are pretty brutalist kinds of politicians. And we need to be tough in response. And I think that demands exposure, so that demands a media that pays attention to this predatory, dangerous, toxic politics, and linking it, by the way, to 2018. Let me come back to where we began. When we head into 2018, everyone should be talking about what the Republicans did to strip people, working people, Trump supporters, all people—if they get away with it—and fighting for a different kind of set of policies, at the state level for now, because the federal is going to be tough.

AMY GOODMAN: And finally, what about the battle within the Democratic Party, which direction to go?

AMY GOODMAN: And do you think the Democratic Party currently is?

AMY GOODMAN: That’s the platform. But the party, how it is actually—

KATRINA VANDEN HEUVEL: The party, there is a struggle on. But I think you will see, I believe, candidates running on a more progressive message in 2018 and in 2020, and putting together new coalitions and not pitting white working class versus the rising American majority. There is a working class, and one has to speak to that and bring together new coalitions, as Stacey Abrams is trying to do.

AMY GOODMAN: —thanks so much for being with us, editor and publisher of The Nation, America’s oldest weekly magazine.

This is Democracy Now! When we come back, the story of a family that is threatened with deportation right here in New York in Little Pakistan, in Brooklyn. Stay with us.

Can Brooklyn’s Little Pakistan Survive Trump? Inside One Family’s Fight to Stop Their Deportation 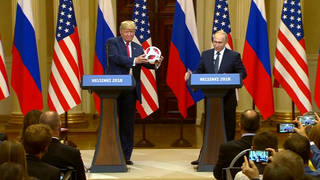