Health experts say, given the shortcomings of both the Affordable Care Act and Republican proposals, now is the time to move forward with a simple Medicare-for-all system, known as single payer. In 2015, even Donald Trump appeared to come out in favor of a form of single-payer health insurance. About 20,000 U.S. physicians now support single-payer healthcare, and National Nurses United, the biggest nursing union in the country, is also pushing for the program that would guarantee universal coverage. We speak with Dr. Steffie Woolhandler, a key advocate for Medicare for all.

StorySep 18, 2017No Is Not Enough: Naomi Klein on Bernie’s Medicare-for-All Bill & Future of Democratic Party

AMY GOODMAN: During a 60 Minutes interview in 2015, Donald Trump appeared to come out in favor of a form of single-payer health insurance for the uninsured. I wanted to play this clip.

DONALD TRUMP: Obamacare is going to be repealed and replaced. Obamacare is a disaster, if you look at what’s going on with premiums, where they’re up 45, 50, 55 percent.

SCOTT PELLEY: So how do you fix it?

DONALD TRUMP: There’s many different ways, by the way. Everybody’s got to be covered. This is an un-Republican thing for me to say, because a lot of times they say, “No, no, the lower 25 percent, they can’t afford private.” But—

DONALD TRUMP: I am going to take care of everybody. I don’t care if it costs me votes or not. Everybody’s going to be taken care of, much better than they’re taken care of now.

SCOTT PELLEY: —is going to be taken care of how?

DONALD TRUMP: They’re going to be taken care of.

DONALD TRUMP: I would make a deal with existing hospitals to take care of people. And you know what? This is probably—

SCOTT PELLEY: Make a deal? Who pays for it?

AMY GOODMAN: That was Donald Trump in 2015. Dr. Steffie Woolhandler, can you respond? You’re one of the key advocates for Medicare for all. Where does that fit into this picture today? Do you think this is a moment where the time for Medicare for all can be pushed around the country in a very big way, as people across the political spectrum are horrified by the specter of, among other things, tens of millions of people losing their health insurance?

So the best way to fight the Republican attacks is to say, “Let’s move forward from the Affordable Care Act to a single-payer system, rather than backward through repeal.” The single-payer system works, because by having a single, simple Medicare-for-all system, you save so much money on administrative costs and overhead that you can cover all of the uninsured and improve coverage for everybody else who has gaps in their coverage without raising total healthcare costs. And that’s why about 20,000 U.S. physicians have come together into Physicians for a National Health Program to advocate single payer. That’s why the National Nurses United, the biggest nursing union in the country, is pushing single payer. It’s why Senator Sanders ran on single payer. And it’s why Congressman John Conyers has introduced a bill into Congress, with 112 co-sponsors, for single payer. So now is the time to be saying to the electorate, the ACA was a step forward, but not a big enough step. We need to be moving forward from the ACA to that single-payer, Medicare-for-all plan that Americans need and deserve.

AMY GOODMAN: And how feasible do you think this is? I mean, Senator Bernie Sanders has yet to introduce this bill, the type that Conyers already has introduced in the House.

DR. STEFFIE WOOLHANDLER: OK, my understanding is Sanders is planning to introduce a bill over the summer. The Conyers bill has gained a lot of co-sponsors. More than half of all the Democrats in the House of Representatives now co-sponsor the Conyers bill. That’s more co-sponsors than any time in history. We’re seeing a lot of public support for the idea of single payer. We’re seeing a big movement for single payer at the state level in California. Obviously we’re getting a whole lot more discussion of single payer now than we’ve ever had before.

AMY GOODMAN: Let me ask you—

AMY GOODMAN: Let me ask you, very quickly. In California, it’s passed the state Senate. It’s got to go through the Assembly, and then it has to go to Governor Brown. Do you think that he will sign off on it, unlike what happened in Nevada, where the Republican senator, in that case, said no to Medicare for all, even though it was passed by the Nevada Legislature?

DR. STEFFIE WOOLHANDLER: OK, well, we’re only going to get single payer if the populace keeps the pressure on the politicians. It’s not going to happen automatically. It’s not going to happen because Governor Brown has occasionally in the past said he likes single payer. It’s going to happen because we have a movement that’s strong enough to counter the political power of these rich people, who are getting these huge tax cuts; of the insurance industry, who would have no place in an efficiently run single-payer system; of Pharma, who thinks that they’re going to have to accept lower prices under single payer. In fact, they’re right. So that’s a lot of political power. And the only way to push through that is to really build a movement. But, you know, that really seems possible right now, with polls showing that two out of every three Americans who have an opinion on healthcare think we need some sort of Medicare-for-all program. So, now is really the time to be pushing this—in fact, the only way to really counter the Republican momentum at this point.

AMY GOODMAN: Well, Dr. Steffie Woolhandler, I want to thank you for being with us, key advocate for Medicare for all—and again, when she referred to Pharma, meaning Big Pharma, the drug companies—and Dr. Willie Parker, who happens to be joining us from Aspen, Colorado, who is the chair of the board of Physicians for Reproductive Health.

This is Democracy Now! When we come back, a devastating piece in the latest Harper’s magazine, “Ghost Nation: An Ethnic-Cleansing Campaign by the Government Threatens to Empty South Sudan.” Stay with us. 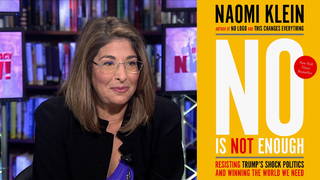 No Is Not Enough: Naomi Klein on Bernie’s Medicare-for-All Bill & Future of Democratic Party