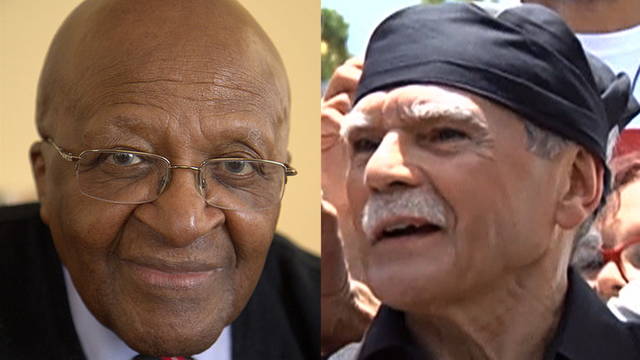 On Thursday, Democracy Now!’s Amy Goodman and Juan González will interview longtime Puerto Rican independence activist Oscar López Rivera, who was imprisoned for about 35 years—much of the time in solitary confinement—before President Obama commuted his sentence in January and he was released on May 17, 2017.

In 1981, López Rivera was convicted on federal charges including seditious conspiracy—conspiring to oppose U.S. authority over Puerto Rico by force. In 1999, President Bill Clinton commuted the sentences of 16 members of the FALN, but López Rivera refused to accept the deal because it did not include two fellow activists, who have since been released.

As González reported in his column for the Daily News, the “boycott campaign was quietly organized by a right-wing conservative group in Washington, D.C., the Media Research Center, that receives major funding from donors close to both President Trump and to Breitbart News.” López Rivera now plans to march as a humble citizen.

Over the years, one of López Rivera’s strongest supporters has been Archbishop Desmond Tutu. This is an exclusive statement Tutu just issued today in support of López Rivera.

South Africans in struggle during the days of apartheid became used to our people being imprisoned for their work for freedom and justice. For decades, our leaders spent their days on Robben Island and other notorious prisons, accused by the racist regime of being “terrorists.” Even after Nelson Mandela became our first democratically-elected President, beloved by our people and by millions around the world, he remained on the U.S. “no-fly” list for 14, formally labeled a terrorist by those who for many years supported white minority rule.

For that reason, it was easy to join the call for the freedom of Puerto Rican activist Oscar Lopez Rivera, sentenced more than three decades ago for the same crime as Mandela: “seditious conspiracy” (in Oscar’s case, against U.S. colonial control of his homeland). After so many prayers and petitions, I–and many of my Nobel Peace and Elder colleagues from every corner of the globe–were simply delighted to learn of President Obama’s decision to commute the sentence of Oscar Lopez Rivera, announced during his last week in office.

His Holiness Pope Francis, San Juan’s Archbishop Roberto Gonzalez Nieves, the United Nations Decolonization Committee, and the hundreds of thousands of people who joined the call for Lopez Rivera’s release, recognized that Oscar and his compatriots long ago denounced violence, dedicating themselves to building unity and peace in the Caribbean. Nevertheless, I’ve learned that the corporate heads of several multinational companies have withdrawn their support for the National Puerto Rican Parade because they are honoring Oscar as a “Freedom Hero.”

The huge, New York-based Parade, which coincides with Oscar Lopez Rivera’s first visit to that city, is an annual celebration—and Puerto Ricans themselves must be able to decide without outside intervention who they want to honor. Had South Africans and people of the African diaspora allowed others to determine who we would embrace, Mandela would still be in prison and have been stripped of the stature we gave him and that he deserved.

Personally, I wish I could be with you, but am happy at least to join with joy in saying “Welcome Home” to Oscar. We send prayers for peace and empowerment of the Puerto Rican people, and all those who work for justice. God Bless You All.