As Senate Republicans unveil their latest healthcare bill, they face opposition within their own party as well as sustained grassroots resistance to their plans. Eleven interfaith leaders, including the North Carolina NAACP president, Reverend William Barber, were arrested Thursday outside Senate Majority Leader Mitch McConnell’s office in the latest series of demonstrations, We go to Capitol Hill to speak with Minnesota Democratic Congressmember Keith Ellison, deputy chair of the Democratic National Committee. Ellison, the first Muslim member of Congress, also discusses today’s vote on a controversial proposal by Arizona Republican Congressmember Trent Franks that calls for identifying “Islamic religious doctrines, concepts or schools of thought” that could be used by terrorist groups, and the $3 million settlement in the wrongful death lawsuit of Philando Castile.

AMY GOODMAN: On Thursday, top Senate Republicans unveiled their latest healthcare plan. Senate Majority Leader Mitch McConnell is once again facing opposition from within his own party over the plan to repeal and replace the Affordable Care Act. The previous effort by Republicans to push through their replacement healthcare legislation failed after at least 10 Republican senators came out against the bill. Well, on Thursday, Susan Collins of Maine and Rand Paul of Kentucky said they would oppose even putting the new bill to a vote. A third Republican senator, Mike Lee of Utah, said he’s undecided on whether he’ll support the bill.

Republicans are also facing sustained grassroots resistance to their plans. On Thursday, 11 interfaith leaders, including North Carolina NAACP president Reverend William Barber, were arrested outside Senate Majority Leader Mitch McConnell’s office protesting the latest version of the bill. This is Traci Blackmon, executive minister of justice and witness ministries for the United Church of Christ, standing beside Reverend William Barber.

REV. TRACI BLACKMON: I happen to know that the people of Kentucky will suffer if this healthcare bill passes. You may be OK. Your friends may be OK. But the people who put you in office will suffer because of this bill. It is time to stop calling God by other names when you really want to call God capitalism.

AMY GOODMAN: Thursday’s protests were the latest in a series of demonstrations against the Republican plan to repeal and replace the Affordable Care Act. On Monday, scores of protesters gathered outside the Republican National Committee headquarters and at the offices of some Republican lawmakers chanting slogans including “Trumpcare kills” and “Healthcare is a human right.” U.S. Capitol Police said in a statement 80 people were arrested at 13 locations in House and Senate office buildings.

Well, for more on the Republicans’ latest healthcare plan and the resistance to it, as well as other issues, we’re joined on Capitol Hill by Minnesota Democratic Congressman Keith Ellison. He’s the first Muslim member of Congress. He’s the deputy chair of the Democratic National Committee.

Welcome back to Democracy Now!, Congressman Ellison. Your response to these protests and, of course, the reintroduction of the Republican healthcare plan to repeal and replace?

REP. KEITH ELLISON: Well, I’m deeply grateful to those people who are protesting. They’re literally putting their bodies on the line so that millions of Americans can go to the doctor when they’re sick. What they’re doing is, I think, in the greatest tradition of public service and in civil disobedience. And really, it has been the protesters and the demonstrators, people like William Barber, Reverend Barber, and many others, who have been able to keep us in this fight, because, as you know, we don’t have the White House or either house in Congress, so we’ve had to rely on people power. And it turns out that that’s the best power. So, I would say that—continue to stay out there, raise your voices, tell your stories. Understand that behind every statistic is a human life.

And people are really concerned. As I talk to my constituents and people all over the country, they’re horrified of the idea of going back to the bad old days where you could be excluded or get a very high price for having a pre-existing condition, where you might get charged five times more just because you’re above 50 but below 64, and a whole number of other problems.

This Senate bill is not an improvement. They tried to put a little bit more token money into opioid addiction. It’s of course not enough, but it’s designed to try to get some people in to vote for this bill. But I’d say, in West Virginia, in Nevada, in states like that, this opioid money is not going to make any difference. And it will dramatically—the cuts to Medicaid will dramatically put people in the position where they cannot afford healthcare.

So, keep up the fight. Keep up the pressure. We’re in this.

SEN. TED CRUZ: If we’re lowering premiums, it’s a win for everyone. And this draft now has two major provisions: one, consumer freedom, but the second is allowing people to use health savings accounts to pay for premiums. … I think today was a significant step in the right direction.

AMY GOODMAN: Congressman Ellison, can you explain the Cruz amendment and what this means?

REP. KEITH ELLISON: Yeah. The Cruz amendment is basically saying we’re going to have a two-tiered healthcare system. One, that has to be Obamacare or affordable healthcare-compliant, it will probably cost dramatically more than the alternative plan. The alternative plan is, if you’re young and healthy, you can get a non-Affordable Care Act-compliant plan, which means they can have health savings accounts, and they can charge you less, but you’ll have a much higher deductible. But at the end of the day, it’s not going to solve any problem, because what will happen is, people who really need healthcare will go into one set of plans, and the people who don’t need it and are healthy will go into the other, and it’ll create a two-tiered healthcare system. One will be—one will crash, because it won’t be affordable. And the other will—you know, won’t offer essential health benefits when people need them.

AMY GOODMAN: I want to switch gears. The House is voting today on a controversial proposal by Arizona—

AMY GOODMAN: —Republican Congressman Trent Franks that calls for identifying, quote, “Islamic religious doctrines, concepts or schools of thought,” unquote, that could be used by terrorist groups. In an interview with Politico, Franks stated, quote, “Right now, there is a certain spectrum within the Islamist world that is at the root of the ideological impulse for terrorism. Ironically, Muslims are the prime targets of these groups. To suggest that this is anti-Muslim is a fallacy, and I think that anyone who really understands it knows that.” Explain what exactly you’re going to be voting on today, Congressman Ellison.

REP. KEITH ELLISON: We’re going to be voting on a piece of legislation which says it’s fine to single out one religion and log in and categorize and list leaders, log in and categorize certain doctrines within, and identify that religion as associated with national security and terrorism, and not others. And in my view, that is an abridgment of the free exercise of religion in America. It’s unconstitutional. It’s wrong, and it’s immoral. And it’s helping to fuel the stigma associated with Islam and Islamophobia and anti-Muslim hate.

And all over this country, we see people attacked because of their faith. In my own state of Minnesota, a wonderful woman by the name of Asma Jama was beat in the face with a beer mug, and she was severely injured. She forgave her attacker, but it is stuff like this that fuels and sets a tone and a tempo where injuries like that can occur. And they’ve been happening all over the country.

So, I think that once you ask Congress to direct the Department of Defense to single out and scrutinize one religion, to the exclusion of others, you’re basically promoting anti-Muslim sentiment, and it has real-life consequences on the ground. Plus, I believe it’s unconstitutional. I’m urging a strong “no” vote. I’m asking my colleagues to come out no and to say that—even if you don’t agree with me, would you please stand with your oath to uphold the Constitution? So, it’s a bad thing, and we’re trying to stand against it.

AMY GOODMAN: Let me turn to the case of Philando Castile. In your home state of Minnesota, the city of Saint Anthony will pay nearly $3 million to the family of Philando Castile to settle the wrongful death lawsuit, less than two weeks after officer Jeronimo Yanez was acquitted on manslaughter charges for killing Castile during a traffic stop last year. Can you talk about the significance of this settlement and what has changed in Minneapolis, St. Paul, the city that you’re in, that you represent, where—well, where Philando Castile was killed by a police officer?

REP. KEITH ELLISON: That money will never replace that beloved young man, Philando Castile, beloved by all of the children and their families who participated in the lunchroom that he ran at the Hill elementary school, beloved by his family, people around him. And the money is nothing more than a recognition and an admission that he did not have to die. His life was taken away wrongfully. That’s what it really represents.

I was deeply, deeply disturbed and hurt when that acquittal came forward. And it just reinforced the point that we even have a lot of societal lack of understanding and appreciation for the lives of people who die at the hands of law enforcement. But the city knows that they were in the wrong. They didn’t want a civil case tried, because facts would have came out that would have really made them look bad. And, of course, it would have just prolonged the pain of the Castile family.

Another development is that Yanez is gone. He’s no longer part of the Saint Anthony Police Department. So the other lesson is that when you act as he did—horrifying abuse of power—you’ll be fired. But at the end of the day, he should have criminal liability. But the jury saw it otherwise, and that’s the way it is.

But, yeah, we are changed. You indicated, how have we changed? I think that there is a general recognition—

REP. KEITH ELLISON: —yeah, that this is wrong, and we have to take decisive action to change it.

AMY GOODMAN: Congressman Keith Ellison, we want to thank you so much for being with us, also the deputy chair of the Democratic National Committee.

AMY GOODMAN: This is Democracy Now! Thank you very much. When we come back, find out why the Oscar-nominated filmmaker James Cromwell is going to jail today. 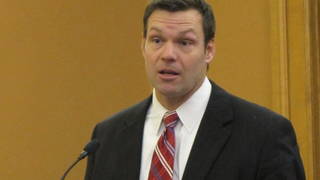