On Wednesday, the Republican-controlled House Budget Committee approved its 2018 budget resolution. The budget aims to rewrite the tax code to favor the wealthy and to slash funding for Medicare and Medicaid. It would also add another $30 billion to Trump’s record-setting $668 billion request for Pentagon spending. The budget faces opposition from both moderate and conservative Republicans. We speak with David Cay Johnston, Pulitzer Prize-winning investigative reporter and founder of DCReport.org.

AMY GOODMAN: I want to turn, very quickly, to White House budget director Mick Mulvaney speaking Wednesday during the hearings. This is, overall, talking about the budget, defending the proposed cuts to safety net programs like Medicaid and food stamps.

DAVID CAY JOHNSTON: Oh, yes. Well, this is what DCReport.org reported yesterday. This is a budget that increases the military, increases immigration, refers to those as appropriate uses of precious taxpayer resources. And the Trump budget is not designed to get people in a position where they don’t need government help at all, but it is clearly going in the direction of turning America into a police state. And that should get a lot of concern, especially that the memo we wrote about at DCReport.org has not made a single major news organization, Amy.

AMY GOODMAN: But, overall, if you can speak about what this budget means?

DAVID CAY JOHNSTON: Oh, what this budget means is less for those people who are needy, for people who are disabled, who are poorly educated and don’t have good jobs, who lost their jobs because of trade—one of Donald’s big issues—and, instead, lavishes more benefits and continues spending that benefits the wealthiest among us. And this goes to the Republican theme that I describe as: The biggest economic problem we have, according to the Republicans, is that the rich don’t have enough. This is more Republican redistribution to the rich, who don’t need it, and away from those who have demonstrable, unquestioned need.

NERMEEN SHAIKH: And, David, let’s go to another issue, namely, that last night it was revealed that Deutsche Bank now is being drawn into the investigation about Trump’s links, possible links, to Russia. So could you talk about the significance of that and what role Deutsche Bank has played?

DAVID CAY JOHNSTON: Well, this is very important. It’s the reason that Donald Trump told The New York Times yesterday that Robert Mueller had better not investigate his family finances. Deutsche Bank has been one of the favored banks for the Russian oligarchs to launder money. And the Russian oligarchs are essentially a network of international criminals. They’ve been fined over $600 million for laundering Russian money in Germany, in Cyprus and in New York. And Donald has hundreds of millions of dollars he owes to Deutsche Bank. It’s the only big bank that will loan to him directly. Back when I was exposing dubious and illegal tax shelters in The New York Times at the turn of the century, Deutsche Bank was one of the biggest promoters of tax evasion products in America. Of course, it’s not a crime in Germany to help people cheat on their taxes in America, but it is a crime here.

And Donald Trump has relied very heavily, by his own and his sons’ account, on Russian money. Digging into Deutsche Bank’s records, digging into Donald Trump’s past business deals are going to show deep ties to the Russians, some of which are quite current. There’s current litigation going on over an alleged tax fraud involving the Trump SoHo hotel. Donald owned 18 percent of the profits to that project. The profits all disappeared into an Icelandic bank that turned out to be under the thumb of one of the Russian oligarchs. This is really troublesome for Donald, and it is the reason he has taken the extraordinary position of trying to tell his prosecutor what he can and can’t do. You don’t get to pick your prosecutor, and you certainly don’t get to tell your prosecutor what he can and cannot investigate.

AMY GOODMAN: David Cay Johnston, before we let you go, it’s—today is the six-month marker, the six months of the Trump administration. You are his unofficial—or, I should say, unauthorized—biographer. What has surprised you most? You have covered Donald Trump for decades.

DAVID CAY JOHNSTON: Actually, very little, Amy. He’s behaved as I predicted and said publicly before the election. He’s manifestly unfit to hold a job on a city council. As the pressures of this job have come upon him, you’ve seen him behave in increasingly erratic ways. They are going to get worse. You’ll notice that he trashes people one day, praises them the next, then trashes them again. He has now denigrated his own attorney general, because his own attorney general didn’t act to protect him from his own wrongdoing. And what we’re going to see, going forward, is more of Donald blaming everyone else. And let’s remember, we were told, six months in, there’d be so much winning, Americans will be saying, “It’s so much! It’s so much winning! We just can’t stand it! Please, stop!” What have we won so far?

AMY GOODMAN: David Cay Johnston, I want to thank you very much for being with us, Pulitzer Prize-winning investigative reporter, previously with The New York Times, now founder and editor of DCReport.org. Most recent piece, we’ll link to, “Is This Trump’s Vision for America? In His Budget, You Can See a Country That Looks Like a Police State.” His biography of Donald Trump, The Making of Donald Trump.

This is Democracy Now! When we come back, the voting commission has its first meeting yesterday. Donald Trump addresses them. We’ll get the latest. And then we’ll look at Russia and the Donald Trump money trail. Stay with us.

Rights Advocates: Trump’s Commission on Election Integrity Set Up as a Pretext for Voter Suppression

NEXTRights Advocates: Trump’s Commission on Election Integrity Set Up as a Pretext for Voter Suppression 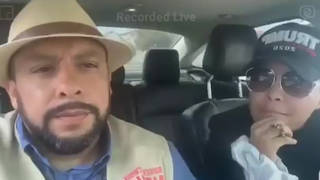