Republican Majority Leader Mitch McConnell has announced the Senate will vote next week on whether to repeal the Affordable Care Act without a replacement—even though the bill currently lacks enough Republican support to pass. McConnell’s announcement came after President Trump invited all 52 Republican senators to the White House for lunchtime talks aimed at reviving stalled efforts on healthcare.

AMY GOODMAN: Before we go—and in the next segment, we’re going to be talking about Jared Kushner’s wife, President Trump’s daughter, Ivanka Trump, and her own businesses, not in this country, but in Indonesia, where Ivanka brand clothes are manufactured—I wanted to ask you, Ryan Grim, about what’s happening with the healthcare debate on Capitol Hill. You cover all developments in Congress closely. This week, of course, the massive news, Republican Majority Leader Mitch McConnell said the Senate will vote next week on whether to repeal the Affordable Care Act without a replacement, even though the bill currently lacks enough Republican support to pass.

AMY GOODMAN: McConnell’s announcement came after President Trump invited all 52 Republican senators to the White House for lunch, aimed at reviving stalled efforts on healthcare. This is what he said.

MAJORITY LEADER MITCH McCONNELL: There is a large majority in our conference that want to demonstrate to the American people that they intend to keep the commitment they made in four straight elections to repeal Obamacare. I think we all agree it’s better to both repeal and replace, but we could have a vote on either.

AMY GOODMAN: Do you believe this bill is dead?

RYAN GRIM: Yes, yes, it is over. This is theater at this point. And if you look closely at what McConnell said, he said “the large majority of people in our conference.” They only have—with John McCain in Arizona not able to vote, they have 51 people in their conference. So that’s one more than they need to have the actual majority, because Mike Pence can break the votes. So, but what he says, they have a majority within their conference. So, in other words, they don’t have a majority within the Senate, which is what you need.

So what he’s saying they’re going to do is they’re going to open debate on healthcare reform, and then they’re going to present two options: For the people that want some kind of a replacement bill, they can vote for that; for people that want to just simply repeal it straight up, they can vote for that instead. So that allows them to get to an actual vote, which McConnell believes is cathartic and is a necessary step to put this to rest, as the House learned that when they pulled their bill and never had a vote, it felt anticlimactic. And the kind of grassroots activists were demanding some action, and so they put together a bill in the House that was never really intended to become law. It was just a—it was just paper that enough Republicans could sign on to and then punt over to the Senate, where they knew it would fail. And so, this is an effort to just put people on record and say, “Here, you had a chance to vote. Look, we had 40-some for this. We had 40-some for that. We don’t have enough for either. Now we’re moving on.”

But because Trump continues to insist on all of this theater, he has burned through weeks and weeks where he could have been doing tax reform or infrastructure or any other part of his agenda. You know, we’re getting close to August, and he’s still on this, when we’ve known for months that it didn’t have the votes.

AMY GOODMAN: Ryan Grim, I want to thank you for being with us, bureau chief for The Intercept. We’ll link to your latest piece, “U.S. Lawmakers Seek to Criminally Outlaw Support for Boycott Campaign Against Israel,” and your other pieces.

This is Democracy Now! When we come back, it’s “Made in America” week. 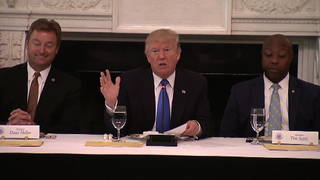