Embraced by Far-Right Gov’t in Poland, Trump Claims Future of Western Civilization is at Stake

In a major speech in Poland, President Donald Trump said Western civilization is at stake, as he warned about the threats of “terrorism and extremism.” He was cheered on by supporters of Poland’s right-wing government, who were bused in to the speech. Meanwhile, Trump is facing criticism after becoming the first U.S. president in decades to skip visiting the Warsaw ghetto uprising monument. We speak with Polish-Nigerian journalist Remi Adekoya, a regular contributor to The Guardian and the former political editor of the Warsaw Business Journal.

NERMEEN SHAIKH: In a major speech in Poland earlier today, President Trump said the future of Western civilization is at stake, as he warned against the threats of terrorism and extremism. Trump spoke in Krasinski Square, near the site of the 1944 Warsaw uprising against the Nazis.

PRESIDENT DONALD TRUMP: This continent no longer confronts the specter of communism, but today we’re in the West, and we have to say there are dire threats to our security and to our way of life. You see what’s happening out there. They are threats. We will confront them. We will win. But they are threats. … We are confronted by another oppressive ideology, one that seeks to export terrorism and extremism all around the globe. America and Europe have suffered one terror attack after another. We’re going to get it to stop.

NERMEEN SHAIKH: President Trump’s speech was often interrupted by applause. According to news reports, supporters of the right-wing Polish government were bused in to hear Trump’s speech. Trump arrived in Poland Wednesday and met with Poland’s president, Andrzej Duda, before his Warsaw speech. Poland has one of the furthest-right governments in Europe and is currently defying European Union rules by refusing to allow refugees into Poland.

We’re joined now by the Polish-Nigerian journalist Remi Adekoya. He is a regular contributor to The Guardian and the former political editor of the Warsaw Business Journal. His latest article for The Guardian is “Poland’s courting of Trump is a few supporters short of a picnic.”

REMI ADEKOYA: Well, President Trump obviously wanted to start off in a place where he’d be greeted warmly. So, as you mentioned, the right-wing government of Poland right now, which is very pro-Trump and very much in support of Trump’s worldview, arranged—bused in their supporters. Trump gave this speech, as you said. It was full of historical analogies and symbolism. He talked about how Poland had endured the invasion of Nazi Germany, how, after that, Poland had to endure Soviet communism. And then he now drew an analogy to what is going on now, and defined the main threat, as he said, for Western civilization in terrorism. And he said the fundamental question which the West now faces is whether it has the will to survive. Now, of course, the rhetorical implication of that question is perhaps the West does not have the will to survive.

And this is important, because countries like Poland, the Polish right-wing government and a lot of the current right-wing governments in Eastern Europe, have been suggesting in the past one, two years that essentially Western Europe seems to have lost its self-preservation instincts, that basically it’s too obsessed with political correctness, it’s too obsessed with multiculturalism, and it essentially is not doing enough to fight the threat of Islamic terrorism or even to realize that actually having a lot of Muslims in Europe can be a huge problem. Poland is one of the main countries which refused to take in any migrants during the 2015, 2016 migrant crisis in Europe, when suddenly a million refugees found themselves in Europe. So, this—so, the fact Trump made this speech in Poland is significant. He would not, most probably, have been able to make this kind of speech in Western Europe to the kind of reception which he did get in Poland, which was very positive. And like I said, supporters of this right-wing government were basically shouting, “Donald Trump! Donald Trump!” throughout the speech.

NERMEEN SHAIKH: And, Remi, can you talk specifically about what the similarities are in the positions that the Trump administration has taken and those of right-wing governments in Eastern Europe, including Poland?

REMI ADEKOYA: Number one, essentially, the Polish government has said they’re not interested in accepting any migrants. So, generally, there’s a sort of anti-migrant, xenophobic stance in their policies. Number two, they question the existence of climate change, just like Trump does. And number three, in the case of the Polish government, they’re very skeptical of what they see as German domination of the EU, which is a theme which Trump also tossed in one of the interviews, saying the EU is essentially a union which is dominated by Germany.

So, on these three issues, the Polish government is very close to what Donald Trump is saying. Essentially, it’s a very right-wing view of the world, exclusivist, which believes that, as they say, Western civilization is under threat—read from brown people, from Muslims especially—and has to close ranks and defend itself, or else it essentially faces extinction.

NERMEEN SHAIKH: And what about the significance of Trump deciding to speak in Poland and meet the Polish head of state, before going to Germany or meeting Angela Merkel?

REMI ADEKOYA: Well, essentially, Polish diplomacy, one must acknowledge, sort of played it smart, let’s say, here. Essentially, they knew Trump was scheduled to go to the G20 summit, so Polish diplomacy, the Polish Foreign Ministry, were the ones who reached out to Washington asking for Trump to visit Poland on his way to the G20 summit and assuring him, essentially, that he’d meet with a very positive reception in Poland, and it would be a very good start for his European trip. There’d be good, you know, optics. There’d be crowds. There’d be people waiting. There’d be people cheering. They assured him that, generally, the Polish people are very supportive of his policies, in contrast to perhaps some of the nations in Western Europe, and, generally, it would be a good way for him to launch his European trip on a—you know, sort of give him momentum launching into his European trip.

AMY GOODMAN: Remi Adekoya, can you talk about your own story as a Polish Nigerian?

REMI ADEKOYA: Yeah. What specifically were you thinking about?

REMI ADEKOYA: Well, my background, my dad was Nigerian, and my mom was Polish. I was born in Nigeria, lived there for the first 17 years of my life. Then I moved to Poland in 1995 as a student and lived there for—living there from since then, essentially. Now I shuttle between the U.K. and Poland. And, yes, that’s it.

I’ve seen the changes in Poland. When I arrived in Poland, the country was just six years out of communism. There were very few foreigners in the country, as you can imagine, definitely very few black people. Things weren’t always very pleasant. With time, things improved regarding the treatment of foreigners and treatment of black people. I mean, there was a time in the mid to late '90s when you could hardly walk on the street without hearing a racial insult hurled at you. But towards the early 2000s, some 10 years after the end of communism, and when Poland joined the EU finally in 2004, you know, the economy improved, and people's moods generally improved. Poles got a little bit more used to seeing foreigners on the streets. Those kind of, let’s say, racial insults just hurled on the streets, just like that, stopped, and things improved vastly.

Unfortunately, since this government came back in, the current Polish government, in 2015, they used the migrant crisis of 2015. When there were a million refugees, essentially, within Europe’s borders looking for where to go, they used that crisis to scare Poles into essentially making the argument that, “Look, look at what is happening in France. Look at what is happening in countries like the U.K. They’ve got terrorism there because of all these Muslims who are there. Do we want that? Obviously, we don’t. So, we can’t allow them—the EU, that is—to push on us, you know, these migrant refugees, these Muslims, and tell us that we have to take care of them, because, essentially, well, maybe while not all Muslims might be terrorists, but some of them definitely are, so why take the risk?”

And since then, for the past two years, there’s been a concerted propaganda effort to scare Poles into believing that, essentially, accepting a few thousand Muslims is essentially inviting terrorist attacks. An example of showing you how, you know, is this propaganda which has changed the mood or not, in 2015, at the beginning of the migrant crisis, when Poles were asked whether Poland should accept some of the migrants, it was roughly 50-50 percent. A slight majority said Poland should accept migrants, 51, 52 percent. A couple of months ago, two months ago, after two years of this government’s propaganda, right now 75 percent of Poles are against accepting any migrants. So you see here the work—you see the effect of the propaganda in just within two years.

AMY GOODMAN: Let me ask you about the speech that President Trump just gave in Warsaw, that’s being billed as a major address.

AMY GOODMAN: In fact, as far as I could see and listen, I don’t think he referred to the Jewish ghetto at all. Now, in The New York Times, they said Michael Schudrich, Poland’s chief rabbi, and other Jewish leaders issued a statement Thursday morning that was critical of the White House’s decision not to visit a monument to the Warsaw ghetto uprising in 1943. Every American president and vice president who’s visited Warsaw since the fall of communism in 1989 has visited the monument. He said, “We deeply regret that President Donald Trump, though speaking in public barely a mile away from the monument, chose to break with that laudable tradition, alongside so many other ones.” So, he spent time talking about the Warsaw uprising by the Polish Home Army, but not about the Warsaw ghetto uprising.

REMI ADEKOYA: And from what—from what we heard, from what we journalists heard from our sources, the Polish government had a significant amount of input into that speech which Donald Trump gave. And I’m almost 95 percent sure—obviously, I wasn’t in the room with them—that it was the Polish government which—who made the suggestions of where he should speak, and generally made suggestions of what he should talk about and what they’d like him to focus on. This was obviously a message very much targeted to—

This is Democracy Now! When we come back, we go to Hamburg, Germany. Stay with us.

Tens of Thousands Plan to Protest Trump and Globalization at G20 Summit in Hamburg, Germany

NEXTTens of Thousands Plan to Protest Trump and Globalization at G20 Summit in Hamburg, Germany 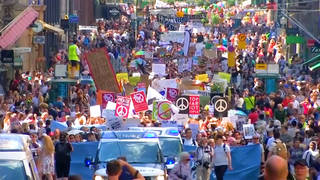