We continue our roundtable discussion on violence that erupted in Charlottesville, Virginia, over the weekend as thousands of neo-Nazis, KKK members and other white nationalists began descending on the city to participate in the “Unite the Right” rally. Thousands of counterprotesters met in Charlottesville, including clergy, students, Black Lives Matter activists, and protesters with the anti-fascist movement known as “antifa.” We are joined by two clergy members and a local Black Lives Matter activist who helped organize the demonstration. Rev. Traci Blackmon is executive minister of Justice and Witness Ministries of the United Church of Christ. During a live interview with MSNBC at the march on Saturday, she was forced to flee as counterprotesters were attacked around her. Cornel West was also on site and describes the scene. We also speak with Jalane Schmidt, an associate professor of religious studies at the University of Virginia.

Web ExclusiveAug 16, 2017Part 2 || Antifa: A Look at the Anti-Fascist Movement Confronting White Supremacists in the Streets

AMY GOODMAN: We’re talking about the terror in Charlottesville. The white supremacist violence there began Friday night as hundreds of neo-Nazis, KKK members and other white nationalists descended on the city and participated in a torch march. Yes, burning torches, in a surprise march across the University of Virginia campus, surrounded the statue of Thomas Jefferson on Friday night. They were chanting “Blood not soil” [sic], a well-known Nazi—”Blood and soil,” a well-known Nazi phrase, “You will not replace us” and “Jew will not replace us” and “White lives matter.”

Cornel West, talk about what you saw Friday night. You were there at—in a church. You were speaking along with others. Did you expect to see what you saw outside?

CORNEL WEST: No, no. I knew I was going to hear a powerful sermon by my dear sister Reverend Dr. Traci Blackmon, and we heard one. We heard poignant words by Professor Jalane Schmidt. And I had a few things to say. It was a beautiful moment—all colors, all religious traditions, Muslims, Jews, Christians, black, white, red, indigenous peoples. And we should never downplay the vicious attack on gay brothers, lesbian sisters, bisexuals and trans folk, that was part of the chanting that took place the next day.

But what happened was, they held us hostage in the church. We could not leave after the service, because the torch march threatening the people who were there. And so, in that sense, I said, “Hmmm, boy, these neofascists, they’re out of control. Where are the police?” And who would think that our dear sister Heather, my dear comrade, who also was with IWW—you know, that’s very important. She was an organizer. She stood with us on Saturday. She paid the ultimate price. And many of us may have to pay that ultimate price.

AMY GOODMAN: I wanted to go to Reverend Traci Blackmon, but first to your MSNBC interview on Saturday, when you were in [Charlottesville], when you were rushed off the live shot as people around you were attacked. Let’s go to that.

REV. TRACI BLACKMON: The schedule for the Nazi and fascist example was supposed to be today and not last night. So we gathered in a standing room-only, maximum-capacity crowd to give a word of encouragement. I was invited in to give a speech to that regard. And as we were closing down—I’ve got to go! I’ve got to go! Got to go!

AMY GOODMAN: That was—that was Joy Reid of MSNBC, as [Traci] Blackmon was whisked away by an ally right there on the set. Reverend Blackmon, what happened then?

REV. TRACI BLACKMON: Well, I was giving the interview for Joy Reid—and thank you for having me here. And I also want to echo my condolences, my deepest sympathy to the family of Heather and to the family of the law enforcement officers who also lost their lives in this unnecessary, tragic event. Joy Reid had invited me on her show to talk about what had happened at the church the night before. And they were not aware of what was happening in Charlottesville until I began to make some calls to let people know that Charlottesville was under attack. They immediately sent a team out to cover. And their news team was stationed inside the perimeter of the events that were happening Saturday. And so, I was asked to come and do an interview. And with the permission of local people on the scene, the community organizers from Charlottesville—I asked them first—I was given permission to do that interview. And in the midst of the interview, we began to hear pops. And I didn’t know what those pops were. I still don’t know what those pops were. But the security that was there rushed me off from the camera. I really didn’t know what was happening in that moment.

AMY GOODMAN: That’s Reverend Traci Blackmon, who’s speaking to us now from St. Louis, who was in Charlottesville this weekend, on Friday night addressing people in the church, and on Saturday on the street. Professor Jalane Schmidt is also with us. And you’re with Black Lives Matter. You were very involved with the organizing around what took place. Can you tell us what happened this weekend, what you understood was going to happen, how people organized, and the kind of response by all of the authorities? Jalane Schmidt is just being seated right now, so let me go to Cornel West. I heard—well, The Guardian reported that people that night, who were responding to the torch march, were actually attacked with swung torches, pepper spray and lighter fluid.

CORNEL WEST: Absolutely. You had a number of the courageous students, of all colors, at the University of Virginia who were protesting against the neofascists themselves. The neofascists had their own ammunition. And this is very important to keep in mind, because the police, for the most part, pulled back. The next day, for example, those 20 of us who were standing, many of them clergy, we would have been crushed like cockroaches if it were not for the anarchists and the anti-fascists who approached, over 300, 350 anti-fascists. We just had 20. And we’re singing “This Little light of Mine,” you know what I mean? So that the—

CORNEL WEST: The anti-fascists, and then, crucial, the anarchists, because they saved our lives, actually. We would have been completely crushed, and I’ll never forget that. Meaning what? Meaning that you had the police holding back, on the one hand, so we couldn’t even get arrested. We were there to get arrested. We couldn’t get arrested, because the police had pulled back, and just allowing fellow citizens to go at each other, you see, and with all of the consequences that would follow therefrom.

So, in that sense, you know, I think what we’re really seeing, though, Sister Amy, is the American empire in decay, with the rule of big money, with massive militarism, facilitated by the scapegoating of the most vulnerable, of immigrants, Muslims, Jews, Arabs, gay, lesbians, trans and bisexuals, and black folk. The white supremacy was so intense. I’ve never seen that kind of hatred in my life. We stood there, and nine units went by, and looking right in our eyes. And they’re cussing me out, and so forth and so on. They’re lucky I didn’t lose my holy ghost, to tell you the truth, because I wanted to start swinging myself. I’m a Christian, but not a pacifist, you know. But I held back. But that kind of hatred—but that is just the theater. It’s big money. It’s big military. And it’s the way in which this capitalist civilization is leading us toward unbelievable darkness and bleakness. And the beautiful thing is the fightback. It was a beautiful thing to see all the people coming back. But they had more fascists than anarchists, more fascists than fightback. 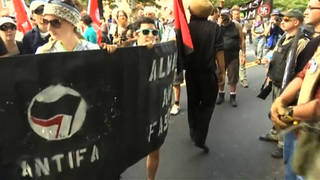 Part 2 || Antifa: A Look at the Anti-Fascist Movement Confronting White Supremacists in the Streets