Death at the Border: How CBP Agents Urged Mexican Teen to Drink the Liquid Meth That Killed Him

Newly released video footage shows U.S. Customs and Border Protection agents telling 16-year-old Mexican teenager Cruz Velazquez to drink from a bottle of liquid methamphetamine at a border checkpoint in San Diego, causing him to die from an acute drug overdose. In 2013, the teenager was crossing from Tijuana to California with two bottles of what he claimed was apple juice. The video shows the border agents, who suspected the liquid was liquid meth, repeatedly encouraging the teenager to drink from it and prove he wasn’t lying. Minutes after the teenager sipped on the liquid, his body began convulsing, and he began shouting “my heart” in Spanish. He passed away shortly after. The agents only tested the liquid after Cruz took several sips and began overdosing. The officers were never disciplined. Critics say Velazquez’s case is just the latest example of rampant abuse and mistreatment by border agents. We speak with John Carlos Frey, two-time Emmy Award-winning journalist and documentary filmmaker. His new investigation is titled “Life and Death at the Border.” The project was conducted in partnership with ABC’s “20/20.”

AMY GOODMAN: Newly released video shows U.S. Customs and Border Protection agents telling 16-year-old Mexican teenager Cruz Velazquez to drink from a bottle of liquid methamphetamine at a border checkpoint in San Diego, causing him to die from an acute drug overdose. In 2013, the teenager was crossing from Tijuana to California with two bottles of what he claimed was apple juice. The newly released video shows the border agents, who suspected the liquid was liquid meth, then repeatedly encouraged him to drink from it, to prove he wasn’t lying. Minutes after the teenager sipped on the liquid, his body began convulsing. He began screaming “Mi corazón,” “My heart.” He died two hours later. This is Velazquez’s younger sister, Reyna, speaking to ABC’s 20/20.

REYNA VELAZQUEZ: They were laughing, until my brother started shaking and screaming. He was in pain. He passed through all that pain before he died. How can a government allow that? It’s like, “OK, you can kill someone.” They took him as a fool, as “Who cares?” Well, that fool, he was the greatest person I ever knew.

AMY GOODMAN: The officers have not been disciplined. The U.S. has paid the Velazquez family a million dollars in a wrongful death lawsuit. However, there was no apology, no admission of wrongdoing. Critics say Cruz Velazquez’s case is just the latest example of rampant abuse and mistreatment by border agents. Earlier this year, then-White House Press Secretary Sean Spicer said the president wanted to “take the shackles off” the nation’s immigration and customs agents.

PRESS SECRETARY SEAN SPICER: The president needed to give guidance, especially after what they went through in the last administration, where there were so many carve-outs that ICE agents and CBP members didn’t—had to figure out, each individual, whether or not they fit in a particular category and they could adjudicate that case. The president wanted to take the shackles off individuals in these agencies and say, “You have a mission. There are laws that need to be followed. You should do your mission and follow the law.”

AMY GOODMAN: For more, we go to Houston, Texas, where we’re joined by John Carlos Frey, two-time Emmy Award-winning journalist, documentary filmmaker. His work focuses on the experience of immigrants on the U.S.-Mexican border.

We welcome you to Democracy Now!, John Carlos. Can you talk about this horrific story? What happened to Cruz Velazquez?

JOHN CARLOS FREY: Yeah, it is a horrific story. And good morning, Amy. This is a shocker. I was given this surveillance video from inside the building, the border crossing, the port of entry between Tijuana, Mexico, and San Diego, California. And it just depicts every bit of detail of what happened to this young man. He was coerced by the Sinaloa Cartel to carry methamphetamine in solution, which is a way that some people are trying to smuggle the drugs across the border. The young man was smuggling drugs. He was in the commission of a crime. And so, there was—there was something suspicious about his behavior, so he got pulled over to secondary inspection.

The two agents that you see in the video examined the contents of his backpack, took a look at the liquid. They opened the bottle. They smelled it. It appeared, by the video itself, that they suspected that this was an illegal narcotic. And instead of testing the liquid, which is what protocol would require them to do—and they have a test kit right there handy—they decided to toy with the young man. And you could see them laughing in the video. And they went ahead and put the bottle right smack in front of him and made some hand gestures for him to go ahead and sip it.

The surveillance video has no audio, so we’re not exactly sure what was said. But in deposition testimony that we obtained after the fact—there was a civil lawsuit, so we obtained those depositions. And the female agent basically said, “If this is juice,” which is what Cruz was claiming that it was, “If it’s juice, go ahead and drink it.” So she actually told the young man to drink the juice. He took a couple of sips. The agents were not satisfied. They asked him about five minutes later to take a couple more sips.

This is highly concentrated methamphetamine. It’s boiled down in liquid so that you can pack as much crystal methamphetamine into solution. It’s viscous. It’s not even liquid; it’s sort of like syrup. And according to forensics, it’s about 10 times the lethal dose. So, the young man didn’t know what he was drinking, and he went ahead and followed the agents’ directives, and within about 45 minutes he was dead.

AMY GOODMAN: I want to turn to a part of the deposition of the border officer, Adrian Perallon.

ATTORNEY: At any point, did you speak with Cruz Velazquez and ask him to take a drink from the bottle?

ADRIAN PERALLON: I never asked him to. He volunteered to. And I believe I gestured to him to go ahead.

ATTORNEY: Did you gesture to him with your hand in some way to—suggesting that he drink?

ADRIAN PERALLON: No, sir. I never suggested or asked him to drink. He volunteered to drink.

AMY GOODMAN: And this is part of the deposition of officer Valerie Baird.

ATTORNEY: You told him to go ahead and drink on more than one occasion, did you not?

ATTORNEY: And you’re sure of that?

AMY GOODMAN: John Carlos Frey, talk more about this and what these agents admitted and didn’t admit.

JOHN CARLOS FREY: Well, they both, right there in the video, admit that they had nothing to do with the kid drinking the liquid. Here are two officers in charge of allowing this young man to either enter the United States or hold him. And protocol, procedure would be, if they suspect that that is an illegal narcotic that he’s carrying, they’re supposed to remove it from the person, separate the drug from the individual, test it; if it tests positive for an illegal narcotic, they’re supposed to arrest the young man. He should be alive today and probably have a jail sentence, if that’s the case. That procedure was not followed.

You know, you have a 16-year-old boy who’s from Mexico, who doesn’t speak good English. Neither of the agents, especially Valerie Baird, spoke Spanish. He’s scared. He knows what he has. He’s smuggling drugs. And the agents are sort of toying with him. He’s going to follow directions. It does not appear, by the video, that he grabbed the bottle, voluntarily drank it. There are hand gestures, and there is, as we know now from the testimony, some sort of command or directive to go ahead and drink it.

So, the agents appear to be lying. And their statements, along with a third female agent, seem to be in conflict with each other. So, someone there behind the desk who is in a position of authority is lying.

AMY GOODMAN: We only have about a minute to go, and I want to ask you about the million-dollar settlement, what it means. And also, overall, what is the message that President Trump is sending? We just heard the former White House Press Secretary Sean Spicer talking about cracking down.

JOHN CARLOS FREY: Yeah, there was a civil lawsuit that was settled just about a month ago in the amount of a million dollars. The federal government paid the family of Cruz Velazquez in that amount. But also, a part of the claim was that no—there was no admission of guilt. So, the federal government basically wrote a check for a million dollars and said, “We did nothing wrong.”

As far as the Trump administration is concerned, they’re adding another 5,000 Border Patrol agents and another 10,000 ICE agents. And they consider DHS and security at the border to be our front line of defense. We are bolstering, we are increasing the size of our force at the border with very little oversight and very little of a reprimand structure. These two agents involved in this particular incident on video were never reprimanded. They were on the job the very next day, even though they, themselves, did not follow their own procedure and there’s a 16-year-old boy who died. They were never taken off the force.

AMY GOODMAN: We’re going to do Part 2 of this discussion and post it at democracynow.org, talking about the latest news around the Mexico border wall and Trump administration policy, overall, with ICE and border agents. John Carlos Frey, thanks so much for joining us, two-time Emmy Award-winning journalist and documentary filmmaker. 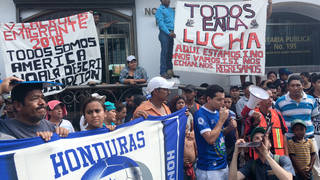