Ahead of Trump’s speech in Phoenix on Tuesday, there was much speculation that Trump would pardon Arizona Sheriff Joe Arpaio, who was convicted of contempt of court for defying an order to stop his deputies from detaining people on suspicion of being undocumented. While he didn’t pardon Arpaio on Tuesday, Trump hinted during his speech that a pardon would be coming soon. For more, we speak with Francisca Porchas, organizing director of Puente Arizona, a grassroots human rights movement for migrant justice.

FRANCISCA PORCHAS: He’s lying. There were about 3,000 to 4,000 people, and hard to tell, but at least that many. And it was a really big crowd, lots of people, different races, different—multigenerational, multicultural. And in general, I think he just goes on saying lies. There was a big crowd. There was a big crowd inside, as well. We protested starting at 4 p.m., all the way until the cops got pretty aggressive with people in the streets, tear-gassing them, shooting them with rubber bullets, without any provocation.

FRANCISCA PORCHAS: Yeah, I mean, I think we’re the most—we’re very disturbed, obviously. Every time he speaks, we are. But I think one of the biggest things for us is the potential pardon of Sherriff Joe Arpaio. For us, it’s a slap in the face of all of the years of organizing that it took for us to hold him accountable, of the lawsuit that came because of his racial profiling in the streets, of all of those people like Noemi Ramos [sic], who—Romero, who was actually detained as a young person trying to raise money for her DACA. And he did almost 90 workplace raids. One of them was where she worked. She now has a felony conviction, can never be able to apply for DACA and is forever impacted. And so, for us, it’s a slap in the face for him to say he’s going to pardon Arpaio.

Who should be pardoned are the people who he criminalized, the people who are now not ever going to be able to come out of the shadows, as you may say, or have a real chance at living a normal life. That’s who truly should be pardoned. For us, him saying he’s going to pardon Arpaio is a very dangerous thing. We’re in the middle of police. I mean, we saw them last night, very aggressive. This is the most violent I’ve ever seen the Phoenix Police Department be. And they are a very violent department. But in saying he’s going to pardon somebody who’s been historically racist and xenophobic and violent towards immigrant people and the community overall, he’s sending out a message to the rest of the country and to the rest of law enforcement in this country that it’s OK to be this racist, that it’s OK to be this abusive and this violent and this vile against immigrant people and people of color and all people, because you will be pardoned, because you will be excused, because you will have the most powerful person in this country say that it’s OK and that you cannot be criminalized for doing your job, when that job is racism.

SHERIFF JOE ARPAIO: I support the majority of his policy. We have to do something about the border. Most of the illegals and drug traffic comes from Mexico. I’m concerned about the drug traffic. When he says, “Put up the wall,” I like the wall to keep the drugs out of our country. That’s the most important thing that’s going on, not the illegal immigration. That’s important, but what about all the drugs coming in, the heroin and everything else? Because it’s a violation of the law to come into this country illegally, you must secure your borders. We have terrorism now. We have cops being killed.

AMY GOODMAN: That is Sheriff Joe Arpaio at the Republican convention, long a supporter of President Trump. When he was running for president, Trump brought Arpaio up to Iowa to campaign with him, and now is talking about one of his earliest supporters, now is hinting that he will be pardoning him. Francisca, for people who don’t know who Sheriff Arpaio is, talk about why he is such a target of deep concern, fear and animosity in the Latino community in Arizona.

FRANCISCA PORCHAS: Yeah, he was in power for about 25 years. He was the first lawman of the first agency, law agency, here in the United States to sign a federal agreement with the U.S. to collaborate with Immigrant Customs Enforcement. So he was very excited, deputized his sheriffs to go out and terrorize people. He would surround a six-block radius in communities of color, poor people communities, Latino communities, and literally, with his civil posse—right?—a bunch of racist volunteers of Sheriff Joe Arpaio, would start rounding people up, rounding people up if they had no identification on them, putting them in the paddy wagon. And he became both the ICE officer, the immigration judge and the deporting officer, because sheriffs were giving people 20-year penalties and bans from coming back into the country.

And so, in 2011, there was a lawsuit by the ACLU that said, “You are engaging in racial profiling.” He terrorized the—he did almost 90 workplace raids, where he picked up 700 people. And he claims that he’s deported 80,000 immigrant people. So, he’s been terrorizing. He had been terrorizing the immigrant community for 10 years. He had been persecuting them. He had targeted them. He had blatantly, intentionally been racist against an entire community here. And so, when this lawsuit came about, a judge decided that it had to stop, that no more people driving while looking brown and looking immigrant could be stopped by him and asked for papers. And he violated this. He violated this court order and has been found guilty of criminal contempt.

But this is—to us, it’s a symbol of racism. It’s a symbol of anti-immigration. It’s a symbol of domestic terrorism. That’s what Joe Arpaio is to us. And we were able to take him out of power at a very weak point last November. We can’t imagine what an Arpaio reign would have been like under Donald Trump. And we suspected that he was going to be pardoned, but, to us, again, it’s a slap in the face. It is saying to us that it’s OK, all the terrorism and all the racism and torture and trauma that people have been through in this county, and that it’s OK for law enforcement to do this across the nation.

AMY GOODMAN: A new report from McClatchy says that some White House aides are counseling President Trump to, quote, “strike an ambitious deal with Congress that offers DREAMers protection in exchange for legislation that pays for a border wall and more detention facilities, drastically curbing legal immigration and implementing E-Verify.” Francisca, your response?

FRANCISCA PORCHAS: Absolutely. We see it coming. I mean, these are tactics to divide and split the movement. And we’re very happy the United We Dream put out a statement that they will not be using themselves or the DREAMers as a bargaining tool or as a bargaining chip. And so, we’re very alarmed. We’re disgusted at this. And we’re not going to allow it, as a movement, to happen.

AMY GOODMAN: Can you talk about the wall, the issue of the wall and what it means, and President Trump saying he is willing to shut down government, to which he got huge applause?

FRANCISCA PORCHAS: Yeah, I mean, he’s been talking about this wall forever. And the reality is that the border has been a military zone for a very long time, where we’ve lost a lot of people. And again, it’s just a way to heighten people’s racism and scapegoating and making it sound like there truly is a war. The reality is, is that re-entry into this country is at an all-time low. And what’s happening is that—what’s happening is that deportations at a domestic level are 40 percent up, and 70 percent up in detainers, meaning that people are not being let out once they’re caught up in ICE. But people who are living here in this country are the ones that are being persecuted and the ones that are being detained and put in a deportation process. And really, the border isn’t—I mean, it’s 40 percent. It’s significantly down in terms of re-entry. And it’s just another excuse to militarize and for supremacy, for U.S. imperialism to show the rest of the world that it’s a fortress and to show its power. And it is a campaign promise. But the reality, it’s a lie. It’s a lie. Re-entry is at an all-time low. And even if it wasn’t, it’s a declaration of war, both on Mexico’s sovereignty, but also on its people and the people that live along the border. And the reality is, is that our folks are being persecuted internally, and there’s hyper-enforcement like we have never seen.

AMY GOODMAN: Before we go, Francisca, I wanted to ask you about this latest news. A federal judge ruling the state of Arizona violated students’ First and 14th Amendment rights by eliminating a Mexican-American studies program from the Tucson public schools that ended up banning books from public schools, like Rethinking Columbus, Shakespeare’s play The Tempest, Pedagogy of the Oppressed and other books. The significance of this ruling?

FRANCISCA PORCHAS: Yeah, it’s a victory. It’s really great news in the midst of a lot of terrible rhetoric and racist rhetoric and police violence in the streets of Phoenix. So we’re just really happy that our young people are going to get to know a little part of their history. And in the midst of, you know, white supremacists in this country and the president of the United States celebrating Confederate monuments and, quote-unquote, “its racist heritage,” we’re very happy that our own people, our own students are going to get to learn about their own heritage and culture.

AMY GOODMAN: I want to thank you very much, Franscisca, for joining us. Francisca Porchas, organizing director at Puente Arizona, a grassroots human rights movement for migrant justice. Her group helped organize the main protest against Trump’s visit to Phoenix on Tuesday night.

This is Democracy Now! When we come back, yes, he is coming back to SNL, to Saturday Night Live, as Donald Trump. We’ll be talking to Alec Baldwin. Stay with us. 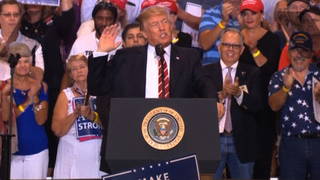