In Puerto Rico, there’s a growing struggle of residents across the island who are demanding the island’s only coal-fired power plant be closed—and that the private company, AES, stop dumping toxic coal ash near the southern town of Peñuelas. For months, the town’s residents have been blockading the trucks carrying the coal ash into their community, saying the waste is poisonous to their health and the environment. The government of Puerto Rico has responded by deploying hundreds of police to the town to break the blockades. Democracy Now!’s Juan Carlos Davila and Laura Gottesdiener report on the growing movement from Puerto Rico. Special thanks to Sam Alcoff and Andre Lewis.

LAURA GOTTESDIENER: Last week in Puerto Rico, there was an unusual protest in the capital, San Juan. Activists poured buckets of toxic coal ash from the island’s only coal-fired power plant onto the steps of the Capitol building to draw attention to the growing struggle of Puerto Ricans across the island who want the plant closed and are blockading the trucks dumping the poisonous waste near their town.

ACTIVIST: [translated] The government of Puerto Rico is creating a health problem, an environmental problem and a problem for the future and the coming generations. We want Puerto Rico to close the coal-fired power plant. The only ashes that we want are those of the fiscal control board.

JOCELYN VELÁZQUEZ: [translated] My name is Jocelyn Velázquez from the group the Promises Are Over. They are closing schools. They will be reducing pensions for retired workers and reducing working days for public employees. They are reducing health services. And we could keep listing all of the things they are going to be reduced, because there is a crisis, and we need to pay. But the fiscal control board doesn’t come only as a political body to collect a debt. They come with an ideology, an ideology that turns all of our natural resources, all of our land, water and sun, into one more commodity to pay the bondholders.

LAURA GOTTESDIENER: In Puerto Rico’s southern town of Peñuelas, residents have been fighting to stop a private company named Applied Energy Systems, or AES, from dumping the coal ash in a landfill next to their community. Several times a week, the government is forced to deploy hundreds of police officers to break the residents’ blockades.

YANINA MORENO: [translated] My name is Yanina Moreno. I am one of the spokespeople from the camp against the ashes in Peñuelas. When the trucks drive by, they are speeding from the time they leave the camp in Guayama. And the police create a line of police cars, a whole perimeter to protect the street. In order to deposit the ashes, they have to mobilize a whole operation, a whole mobilization of police, because, otherwise, they would not be able to enter. Without the police, the trucks would never be able to enter Peñuelas.

LAURA GOTTESDIENER: University of Puerto Rico biology professor Arturo Massol has been studying the health and environmental impacts of this coal ash.

ARTURO MASSOL: [translated] The health impacts of the ashes can range from allergies to respiratory problems to issues as dramatic as birth defects or spontaneous abortions. It is a hazardous material. It is a nonbiodegradable material. And about 600 tons are generated daily in Puerto Rico. So the volume generated is provoking a severe disposal problem for Puerto Rico and for any other place where these ashes are produced.

YANINA MORENO: [translated] When the company AES was established in Puerto Rico at the end of the 1990s, the contract with the Authority of Electrical Energy, which supplies energy to Puerto Rico and its residents—the contract established that the residuals of carbon combustion and the ashes generated by the burning of coal in the plant would not be disposed here in Puerto Rico. Instead, they would be exported. So they began taking those ashes someplace else. And among those places was the Dominican Republic. A series of problems began there. The people who lived in the communities where the ashes were being disposed began presenting symptoms, including respiratory problems and pregnancy problems. Babies were born without extremities or with their intestines exposed.

From there, the situation in Peñuelas began, because they began depositing the ashes in the landfill. The landfill is very close, just meters away from various communities. So we have been resisting for two years. For two years, we’ve had an active encampment against the disposal of ashes in Puerto Rico. A series of companies, petrochemical industries and refineries have been established here. We’ve been receiving contamination for years. Right now, there’s an electrical plant here in Peñuelas. The Costa Sur plant is near here. There is another natural gas plant that generates energy by burning natural gas, known as the EcoEléctrica plant. So we have two plants generating energy. And on top of that, we have to receive the waste from another energy power plant. It’s like they want to bomb us from every side.

LAURA GOTTESDIENER: Earlier this summer, the governor of Puerto Rico signed a new law aimed at prohibiting the disposal of coal ash. But critics, including Dr. Massol, say the law doesn’t solve the problem.

ARTURO MASSOL: [translated] The law has some clauses, in very small letters, that cancel everything that the law says. That is the most disgusting trick. Instead of being called the law to prohibit ashes, it should be called the law that authorizes the company to contaminate. Puerto Rico is in a severe crisis, provoked by a collapsed colonial economic model. And a big part of that crisis is associated with the energy agenda, an agenda that has failed, that is obsolete, that is of the 20th century, in which the Electric Power Authority is indebted more than $10 billion. But these $10 billion were for an infrastructure that does not serve the country. It’s not a good debt. A good debt would be if we had issued those bonds in order to have renewable energy, using the sun, wind, water, biomass. And that way, one could say that we moved forward and away from fossil fuels, while using the resources that the country has available.

LAURA GOTTESDIENER: As the resistance grows in Peñuelas, residents in Guayama, about an hour to the east, have also begun blockading the trucks from leaving the coal-fired power plant there.

PROTESTER: [translated] These officers have a salary because we pay them. But they are protecting corporate interests. We are enraged, because we cannot believe in the police of Puerto Rico.

HÉCTOR LUIS SÁNCHEZ DE JESÚS: [translated] We are impeding, in whatever manner is possible, these ashes, produced here in Guayama, leaving for Peñuelas. We understand that these ashes are poisonous for the Earth, our Mother Earth, and for the health of all residents of Puerto Rico. We have a moral commitment, a moral commitment with our friends in Peñuelas to stop these ashes from being transported there.

YANINA MORENO: [translated] I have two options: stay in my house silently and await death or resist death. 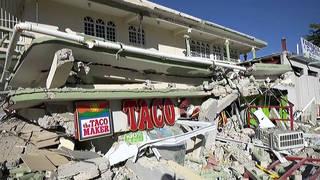