As fallout from Hurricane Harvey in Texas and Louisiana continues, at least 30 people have died and more than 17,000 people are in shelters. Hundreds of thousands are under evacuation orders, and all past U.S. rainfall records have been shattered. In Texas, a third of Harris County—which encompasses Houston—is currently underwater. Houston officials have imposed a mandatory curfew between midnight and 5 a.m. ExxonMobil says Harvey has damaged at least two of its refineries, causing thousands of pounds of chemicals to be released into the air. Residents in Crosby, Texas, are being evacuated amid concerns a chemical factory damaged by Harvey could explode. We speak with Bryan Parras, organizer with the Sierra Club’s Beyond Dirty Fuels campaign and the group Texas Environmental Justice Advocacy Services (t.e.j.a.s.).

AMY GOODMAN: This is Democracy Now!, democracynow.org, The War and Peace Report. I’m Amy Goodman, joined by Democracy Now!’s Renée Feltz, who is a native of Houston, her family in Houston dealing, as so many other people are right now, with this apocalyptic storm. Renée?

RENÉE FELTZ: Thank you, Amy. And thank goodness my family is OK, and I hope everyone else is surviving.

In Texas and Louisiana, at least 30 people have died, more than 17,000 people are in shelters, hundreds of thousands are under evacuation orders, and all past U.S. rainfall records have been shattered, as Hurricane Harvey continues to wreak climate chaos in Houston, the fourth-largest city in the United States. Early today, Harvey, now a tropical storm, made landfall again near Cameron, Louisiana, just beyond the Texas border. Nearly a third of Harris County residents remain underwater. The county is home to over 4.5 million people and includes Houston. While the rain has largely moved east into Louisiana, the Houston area remains in a state of crisis as rivers continue to rise and two large reservoirs are overflowing.

Concern is also growing over the environmental and public health impact of the storm. Houston is home to the country’s largest refining and petrochemical complex. According to the Environmental Defense Fund, more than 1 million pounds of air pollution have been released into the air as petrochemical plants were forced to shut down by the storm. At least 10 oil refineries have been shut down so far.

AMY GOODMAN: Workers at ExxonMobil’s oil refinery in Baytown said the facility, quote, “partially sank” after it flooded and that Exxon was authorized by state environmental officials to release excess emissions while it shut down. In Beaumont, flooding at another Exxon refinery damaged equipment that captures sulfur dioxide, causing it to release amounts that far exceed the company’s permits. This comes as state officials shut off air quality monitors to protect them from storm-related damage, and are relying on facilities to self-report any toxic fumes they release. In April, a federal judge ordered Exxon to pay nearly $20 million in penalties for releasing about 10 million pounds of toxic substances, like benzene.

Meanwhile, authorities have evacuated homes near a chemical plant in Crosby, Texas, over fears the plant could explode. The plant was flooded by the storm and lost power.

For more, we go to Houston, where we’re joined by Bryan Parras, organizer with the Sierra Club’s Beyond Dirty Fuels campaign and t.e.j.a.s., Texas Environmental Justice [Advocacy] Services.

Bryan, we spoke to you on Monday. Can you give us an update from the Petro Metro, from Houston, the fourth-largest city in the country, and tell us where you are in relation to these refineries, and your concerns?

Yeah, this is a historic event, by all means. And I live just east of the Houston Ship Channel, about two miles from where this largest concentration of refineries and chemical plants begin and start. And just yesterday, you know, we’ve been getting reports of all of the things that you mentioned, and I just want to read one here. This is from yesterday. The National Response Center, operated by the U.S. Coast Guard, received more than 30 calls for spilled gasoline, crude oil, petroleum and the release of contaminants from flare stacks in areas affected by Hurricane Harvey. And, you know, these, again, are just self-reports. They shut down the monitors. We have no way of really knowing the complete impact from these facilities. And right now, in Port Arthur, we’re seeing the same situation play out. The largest refinery in the U.S. has shut down, Motiva. And our quest for power has rendered us powerless against the awesome forces of nature. We have to—we have to do better, Amy.

BRYAN PARRAS: That’s correct. It’s just to the east of us, about an hour and a half away. Beaumont is nearby, and other smaller cities. And right now, you know, we’re seeing the same exact situation play out that I had reported on, on Monday, and that I had experienced on Sunday night. And that is, you know, an even worse situation, actually, because people are tweeting—right now Port Arthur is trending on Twitter, because people are begging to be rescued from their homes. You know, that’s the reality right now. Another refinery city, petrochemical city, is experiencing this same thing, and with all of the refineries there, I imagine they’re having to do the same thing. You know, we’ve seen some gas leaks here in La Porte that resulted in a very, very dangerous chemical, anhydrous hydrogen chloride, and this gas mixed with the moisture in the air to produce hydrochloric acid, a corrosive that can damage respiratory organs, eyes, skin and intestines. That’s since been stopped, but these are the real dangers of these facilities being on the coast and near millions of people.

AMY GOODMAN: So, just to put—just to put this in context, you’re talking about Galveston Bay, a quarter of all refinery—oil refinery capacity in the United States. The Gulf Coast has half the refinery capacity of the entire United States. And in Port Arthur, that you’re talking about, they’ve shut down the largest oil refinery in the United States. We’re talking about massive facilities here. You give a tour of—a toxic tour of this area, and as this storm continues into Louisiana, it’s going right through what many have called Cancer Alley—more and more refineries. We’ve talked about this through the week. But the people closest to these plants—and Crosby also, Bryan, if you can talk about—I think it’s a peroxide factory that could possibly explode. The people who live closest to these, these refineries, who are the most vulnerable?

BRYAN PARRAS: Well, just to get to the Crosby situation, I haven’t seen any updates, you know, in about 10 hours, but a chemical plant in Crosby, Texas, was in critical condition as of yesterday night, after its refrigeration system was inundated and the backup power generators failed, raising the possibility that a volatile chemical reaction would lead to an explosion. So, that—that is still unfolding. I haven’t seen any updates from that. But the people who live near these facilities along the Houston Ship Channel are, by large part, minorities, people of color, low-income communities. And in these other areas, like Crosby, these are rural communities, low-income. And Port Arthur, same situation—low-income, largely African-American in Port Arthur. But, you know, it’s incredible that this storm has hit not one petrochemical center, but four now: Corpus Christi; Houston, Texas; Port Arthur-Beaumont; and now making its way into Louisiana and Lake Charles.

RENÉE FELTZ: Bryan, as we conclude the interview with you now—and hopefully we’ll check in with you over the coming weeks and months of this flooding playing out—can you speak, finally, about what you’re hearing locally in terms of notifications about what you’re describing to us and, briefly, what people need to understand if they have any other concerns? Should they go to your website or any other phone numbers?

BRYAN PARRAS: Well, you know, we’ve had a great wealth of leadership from our—I have a lot of movement mothers and sisters. We’ve learned a great deal. I just want to, you know, take a second to acknowledge the 12th anniversary of Hurricane Katrina and thank all of the incredible women who have shown leadership and, you know, this regenerative energy that has kept us going. We’ve learned a lot. And what folks need to do now is take these situations and learn from them. You know, this is—this is such an important moment, not just for us here on the Gulf Coast, but for the entire country. And I want to thank, you know, organizations and individuals who have been at the forefront of helping us better understand and prepare for these situations. There are many organizations—t.e.j.a.s., you can please check us out on Facebook, Twitter.

BRYAN PARRAS: And we’ll get more information to you all.

AMY GOODMAN: And, Bryan, finally, are you concerned that toxins will be released that have never been allowed to be released before, using this hurricane, this tropical storm, as an excuse?

BRYAN PARRAS: It’s possible. You know, that’s the really scary part, Amy. We don’t know. We’re at the behest of the same industries, you know, who are making these dangerous chemicals. And that’s the most stressful part of these storms, the unknown and the constant state of stress of what might happen.

AMY GOODMAN: Bryan Parras, we want to thank you for being with us, organizer with Sierra Club’s Beyond Dirty Fuels campaign and t.e.j.a.s., his group, Texas Environmental Justice Advocacy Services, speaking to us from the Petro Metro, from Houston, the fourth-largest city in the country, which has now been described as apocalyptic. 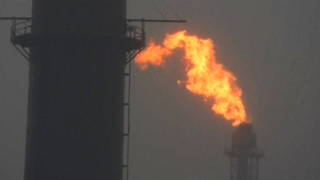