Hurricane Harvey has prompted at least five Texas prisons to evacuate nearly 6,000 inmates, and on Tuesday the Harris County Sheriff’s Office tweeted that their jail next to the swollen Buffalo Bayou in downtown Houston had not been evacuated. Meanwhile, law enforcement officials are urging immigrants not to fear seeking help despite an anti-sanctuary law set to take effect on Friday. We get an update from criminal justice correspondent Renée Feltz.

AMY GOODMAN: As we report on the toll from flooding after Hurricane Harvey, which has now reached so many lives, I want to turn to Houston Police Chief Art Acevedo, who was speaking on Tuesday when he announced the death of an officer who drowned while reporting for duty.

POLICE CHIEF ART ACEVEDO: Unfortunately, in the darkness, Sergeant Perez drove to an underpass that’s about 16-and-a-half feet, drove into the water, and he died in a flood, in a drowning-type event. … So, we couldn’t find him, and once our dive team got there, it was too treacherous to go under and look for him, so we made a decision to leave officers there waiting until the morning, because as much as we wanted to recover him last night, we could not put more officers at risk for what we knew in our hearts was going to be a recovery mission.

AMY GOODMAN: That’s Houston Police Chief Art Acevedo. The chief has also spoken out against a new law set to take effect on Friday, in the midst of this storm, called SB 4, that lets police officers check the legal status of immigrants they detain. This is Chief Acevedo on Democracy Now! just a few weeks ago.

POLICE CHIEF ART ACEVEDO: How you enforce this law without racially profiling is beyond many of us. So, we’ll see what happens, but our folks are well trained, they’re focused, they want to keep Houston safe. And they know that going after, you know, cooks and nannies and gardeners and people that, but for their immigration status, don’t bother anybody is not in the best interest, and it’s something we’re just not interested in.

AMY GOODMAN: That was Chief Acevedo, the Houston police chief, on Democracy Now! Two storms that are happening for people here. You’re talking about the storm, Harvey, and you’re also talking about the crackdown on immigrants in Texas, SB 4 slated to go into effect on Friday. Renée Feltz, you have been covering prisons, immigrants’ rights issues for Democracy Now!, and, of course, all of Texas, where you’re from. Talk about what Acevedo was just talking about, as well as what’s happening at the prisons. As people evacuate all over, obviously, people—prisoners themselves are not free to evacuate. They have to be evacuated.

RENÉE FELTZ: That’s right, Amy. Many immigrants are concerned about going to the shelters and leaving their flooded homes and their flooded neighborhoods. So Chief Acevedo was out there, along with the mayor, Sylvester Turner, in Houston, telling people who are undocumented, “Don’t be afraid to leave your house and ask for help and to go to the shelters.” They have to reiterate these assurances to people over and over again, because SB 4 has created so much fear. And it’s a very real public safety concern that people might be afraid to seek help and could lose their lives.

Now, one interesting thing, we talked to Cesar Espinosa yesterday from FIEL, who works with undocumented immigrants. I saw them, in pictures, out at the convention centers, where people are evacuating to, and they have big hats that say ”FIEL” across the top, like ICE or “Make America great again.” And they help people identify them as service providers to undocumented residents of Houston that want help—for example, need to know how to apply for FEMA. Maybe they have a resident in their family or a member of their family who’s a U.S. citizen and might be eligible to apply and help the rest of the family. So they are there in these facilities, where people are going, to help them and buttressing the efforts of law enforcement officials, who are in a sticky situation. SB 4, as it’s called, could be actually withheld and not go into effect on Friday, if a judge, who’s considering whether or not it’s constitutional, makes their decision before then. So we’ll see what happens.

RENÉE FELTZ: SB 4 is a law that allows police officers to ask immigrants they detain for their immigration status. Before, you had to be in a jail or a prison to get to that point, even though there’s concerns with that.

Amy, speaking of evacuations during this epic flooding, the Harris County Jail is downtown, right next to Buffalo Bayou. We have pictures on our website, and we can show you, of the jail when it was not flooded, right next to the bayou. Well, on Tuesday, the Harris County Sheriff’s Office tweeted that their jail had not been evacuated, despite this flooded bayou. They said, quote, on Twitter, that inmates have been evacuated—have not been evacuated, and they’re ”SAFE & ACCOUNTED for,” and the jails have AC, medical accessibility, food and water. They’re telling us that inmates have access to phone lines to make calls to loved ones. They also tweeted that the company Securus, a private company that provides phone services, has waived their jail calling fees for 8,000-plus inmates to call their loved ones. We’ll see how long that waive is in effect.

I want to say briefly also that there was an interesting exchange between a prisoner, Nanon Williams, who is at one of two facilities that are flooded out there, the Ramsey Unit and another unit—they’re very, very close to water. And they were in Brazoria County, where their river was at its crest—15 feet over its crest, not set to go down 'til Sunday. They started seeing water coming up near the prisons. They used the phones to call their loved ones and say, “People aren't evacuating us, and we need you to make calls and raise concerns.” And so that happened, and now we saw some of these prisons evacuated. You can see that they’re very close to water, in some cases very close to Galveston. So, we were glad to see that happen. We know that there are many prisons, as the head—as the storm heads east now, and so we’re concerned about what’s going to happen, and we’ll keep an eye on that.

AMY GOODMAN: We want to thank you very much, Renée, for that update. We’re going to go to break. When we come back, we’ll go to Naomi Klein, who has a message for the media: Talk about climate change. We’ll also be joined by one of the country’s leading climate scientists, Dr. James Hansen. And then we’re going to talk about the Red Cross. Stay with us.

Naomi Klein’s Message to the Media Covering Houston: Now is the Time to Talk About Climate Change

NEXTNaomi Klein’s Message to the Media Covering Houston: Now is the Time to Talk About Climate Change 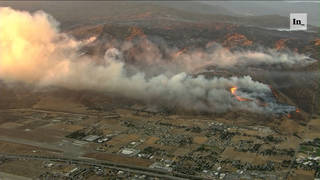