Governor Mark Dayton has condemned as terrorism Saturday’s attack on the Dar Al-Farooq Islamic Center in Bloomington, Minnesota. The explosive device was thrown through the mosque office’s window around 5 a.m. as people were gathering for morning prayers. No one was injured, but the bombing damaged the office. The FBI has taken over the investigation, but so far President Donald Trump has not commented on the attack despite having sent over 25 tweets since the blast. Islamophobic attacks against Muslims and mosques nationwide have been on the rise since Trump was elected. We speak with Mohamed Omar, executive director of the Dar Al-Farooq Islamic Center.

JUAN GONZÁLEZ: We end the show in Minnesota. Governor Mark Dayton has condemned as terrorism Saturday’s attack on the Dar Al-Farooq Islamic Center in Bloomington, the largest mosque in Minnesota. The explosive device was thrown through the mosque office’s windows around 5:00 a.m. as people were gathering for morning prayers. No one was injured, but the bombing shattered windows and damaged the office. This is Minnesota Governor Mark Dayton.

GOV. MARK DAYTON: What a terrible, dastardly, cowardly, terrible act this was that was committed yesterday. It’s a crime. As somebody said in a meeting, if this—the roles were reversed, it would be called a terrorist attack. And that’s what it is. It’s an act of terrorism.

AMY GOODMAN: The FBI has taken over the investigation, but so far President Trump has not said or tweeted a word about the attack. Since the attack occurred on Saturday, Trump has sent out over 25 tweets, but not one about the mosque attack. Islamophobic attacks against Muslims and mosques across the United States have been rising since President Trump was elected. Minnesota is home to the nation’s largest Somali-American community, which has faced a surge of hate crimes to levels not seen since the aftermath of 9/11. While overall hate crimes reported by Minnesota law enforcement agencies dropped by 25 percent since 2010, crimes against Muslims have continued an upward trend.

To talk more about the attack, we go to Minneapolis, where we’re joined by Mohamed Omar. He’s executive director of the Dar Al-Farooq Center. He was in the mosque when the attack occurred on Saturday morning, thankfully not in his office.

We welcome you to Democracy Now! Can you talk about what happened Saturday morning, Mohamed Omar?

MOHAMED OMAR: Yeah. Saturday morning, about 5:00 a.m., when we were preparing to go to first prayer, which is called—in Islam, called prayer of Fajr, one of our worshipers was walking from outside, coming into the building, and he saw a pickup truck standing next to our imam’s office window. And he heard a splash, and then when—you know, a sound of like a broken window. He ran to the scene, and immediately, the truck and the driver, they fled—he fled from the scene while he was speeding in his truck. Then he saw smoke coming from the window, and he ran to the inside to the building, came to inform us there’s a smoke coming from the window. As he was speaking, an explosion, very loud explosion, happened, that I was next—I was in the building. I thought like the whole building almost collapsed or something huge happened. So, we all came out. We ran out, you know, outside and saw this huge, you know, shatter of glass and smoke coming out from this window. This is the—this is the room—this is the office of our imam. And immediately we contacted with 911.

And thank God, the damage—nobody was hurt. But again, the event was awful, and it was—I mean, I never imagined that we will be bombed in the middle of—in the heart of Bloomington, where we every day come for our prayer. And again, this is our community center, our mosque. This is our youth and family center. So, that was—that was very sad, I mean, to experience that experience.

JUAN GONZÁLEZ: And about how many people were in the vicinity at the time? Also, have you—has your mosque received any other threats recently that would give you cause to think that somebody might want to harm the worshipers of the mosque?

MOHAMED OMAR: I would say, you know, we received some phone calls that—in the past, that’s shown some people that, you know, are using bad language or kind of uncomfortable with us, or they’re talking to us in a very bad way, but not really threats that I could consider, you know, that people would say, “We’ll come and kill you or do this to you.” But again, I mean, this—for the last election season in Minnesota, you know, we’ve seen many incidents and many acts that, you know, similarly, are incited by either hate crime, or you could tell that discriminatory statements towards maybe—I mean, some of the people walk in the middle of night and say something to one of the worshipers, or one of the worshipers was walking by, and he experienced a high-speeding car next to him and then saying bad language. But yet, I mean, we have seen a lot since, I mean, the last election, but not specifically something that I could say—we’d report to the police and say, you know, this is a threat, directly a threat, that we can consider as a—

AMY GOODMAN: Mohamed—Mohamed Omar, I wanted to go back to just before Election Day, then the candidate Donald Trump railing against Somali immigrants. This is what he said.

DONALD TRUMP: Here in Minnesota, you’ve seen firsthand the problems caused with faulty refugee vetting, with large numbers of Somali refugees coming into your state, without your knowledge, without your support or approval, and with some of them then joining ISIS and spreading their extremist views all over our country and all over the world. Honestly, it’s hard to believe. It’s hard to believe. And everybody’s reading about the disaster taking place in Minnesota. Everybody’s reading about it. You don’t even have the right to talk about it. You don’t even know who’s coming in. You have no idea.

AMY GOODMAN: That was President Trump on the week of the election, but before he was elected. Mohamed Omar, we just have 20 seconds. He has not tweeted a word about what your governor has called this terrorist attack on your mosque. Your response to President Trump?

MOHAMED OMAR: So, when this—yeah, OK. When this happened, I mean, would say that is—I mean, that’s what most of the ignorant people would—you know, would take—see that as something that they can—

AMY GOODMAN: Mohamed Omar, I want to thank you for being with us. 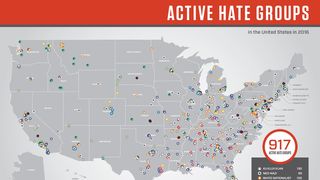