MARGARET BRENNAN: Southern Poverty Law Center said that the number of anti-Muslim groups in the U.S. has tripled between 2015 and 2016, during the time of the campaign. Is this message within the administration—anti-Semitism is not allowed, xenophobia is not allowed—anti-Muslim sentiment within the administration, has the president been forceful about that particular issue?

PRESS SECRETARY SEAN SPICER: Well, I don’t—I think that the president, in terms of his desire to combat radical Islamic terrorism, he understands that people who want to express a peaceful position have every right in our Constitution. But if you come here or want to express views that are—seek to do our country or our people harm, he is going to fight it aggressively, whether it’s domestic acts that are going on here or attempts through people abroad to come into this country. So there’s a big difference between preventing attacks and making sure that we keep this country safe so that there is no loss of life, and allowing people to express themselves in accordance with our First Amendment. Those are two very, very different, different, different things.

AMY GOODMAN: So that was White House spokesperson Sean Spicer. Mark Potok is with us, of the Southern Poverty Law Center, speaking to us from Montgomery, Alabama. Your response, Mark?

MARK POTOK: Well, I mean, I just have to agree: These comments, from Spicer, from Trump, are ludicrous in the extreme. I agree that they both seem to be living in another universe. I mean, let’s get real about Trump. This is—he’s the divider-in-chief. This is a guy who began his campaign describing Mexican immigrants as rapists and drug dealers. And he has gone on to denounce just about every minority out there. You know, it has just been an extraordinary thing to watch. I think that, you know, what has happened with Trump is that when he finally gets backed into a corner by reporters or other people, you know, he kind of says a few words, as was said by the other guest just now, with incredible insincerity about how terrible this anti-Semitism is and the Islamophobia and so on.

You know, I think that the truth is, is that Donald Trump has played footsie with the radical right from the very start of his campaign. He has studiously avoided denouncing or disavowing the extreme right again and again and again. I mean, let’s remember how Trump claimed not to know who David Duke, the former Klan leader, is, therefore he couldn’t disavow him. You know, that was simply a falsehood, a lie, to speak plainly. He knew perfectly well who Duke was. In fact, in 2000, Trump wrote an essay in The New York Times saying why he was dropping his bid for the presidency on the Reform Party ticket, because Duke was associated with the Reform Party and Trump couldn’t have anything to do with him. So, this is all a word game, with an awful lot of falsehoods being sprinkled around.

AMY GOODMAN: Well, we’re going to break. When we come back, I want to ask you about what you wrote: “The radical right was more successful in entering the political mainstream last year than in half a century.” We are speaking with Mark Potok of the Southern Poverty Law Center, as well as Steven Goldstein of the Anne Frank Center here in New York. Stay with us.

AMY GOODMAN: Yes, that music that you just heard is “T5,” Swet Shop Boys. This is Democracy Now!, democracynow.org, The War and Peace Report. I’m Amy Goodman, as we continue with Steven Goldstein of the Anne Frank Center for Mutual Respect and Mark Potok with the Southern Poverty Law Center. That, what you wrote, Mark, “The radical right [was] more successful in entering the political mainstream last year than in half a century,” explain. And explain the findings of your report.

MARK POTOK: Well, even more than half a century. I mean, half a century ago, George Wallace made a run for the presidency in 1968. And it seemed at least imaginable at that point that the radical right would enter the mainstream. But it didn’t. Of course, Wallace lost the election, you know, and things have gone in much the other direction for most of the last 50 years.

So, you know, basically, what we found in the report was that for the second straight year, the number of hate groups went up. But more important than the actual numbers, which actually are near historic highs in some 30 years of counting that we’ve done, is the fact that these groups are just electrified by Trump. They feel that they have a man in the White House. They feel that they have been given permission to say the things they really believe, that these are legitimate and normalized views. So, really, I think the effect of Donald Trump has been to unleash a kind of Pandora’s box of hatreds on our country. And those are not easy things to get back in the box.

You know, the other thing we found, the other really remarkable thing, which you mentioned already, was a near tripling in the number of anti-Muslim hate groups. And I think this is not, you know, 100 percent due to Donald Trump. Certainly, part of it is a response to real-life atrocities from the Islamic State and related kinds of groups. But a huge part of it is due to Trump. Trump really unleashed this with his comments about Muslims not being good enough to be in our country, with his proposal for a Muslim registry, with his idea of surveilling mosques, and on and on and on.

So that, essentially, was our finding, that, you know, the radical right has come alive as a result of Trump. They have never felt—and, in fact, never been, in anyone’s memory—so close to real power. They’re in a position right now to actually have an effect on national policy. A remarkable thing.

AMY GOODMAN: Deeply moving story out of Missouri, where the Jewish cemetery, perhaps hundreds of tombstones, were upended, and a Muslim group went online to raise money to help the Jewish community restore these tombstones. And they raised—I think at this point it’s over $50,000, and said they would contribute this not only to help the cemetery, but other—now over $60,000, it’s been going up by leaps and bounds—but to help Jewish groups around the country that are facing assault. Steven?

AMY GOODMAN: I wanted to go to some other news. On Tuesday, Milo Yiannopoulos resigned as Breitbart’s editor. At a news conference in New York City, a reporter asked him about Trump’s chief strategist, Steve Bannon, who was formerly the head of Breitbart.

REPORTER: What’s your relationship with Steve Bannon? When was the last time you spoke to him?

MILO YIANNOPOULOS: Steve Bannon brought me into Breitbart. Steve Bannon is one of the most formidable and brilliant political operatives of his generation. I have nothing but admiration for the guy. Not an easy person to work for, if you’re a slacker. Not an easy person to work for, if you don’t show up to work or if you don’t really give everything your all. Fortunately, I’m not one of those people. I haven’t spoken to Steve for a very long time, since before he took the job at the White House.

MILO YIANNOPOULOS: Yeah, Steve Bannon, you know, has populated Breitbart with, you know, a disproportionately Jewish, ethnic minority and gay senior editorial team, you know, and we are—well, we were, I should say, far more diverse than any of the people criticizing Breitbart for alleged racism or God knows what it is this—today.

AMY GOODMAN: That was Milo Yiannopoulos, who has just resigned from Breitbart, under allegations that he supported pedophilia. Mark Potok, the significance of Breitbart now represented in the White House, although Steve Bannon, of course, has supposedly left Breitbart for the time being?

MARK POTOK: Well, I mean, Steve Bannon is the person that the extreme right feels is their man in the White House. And they are not wrong. You know, as far as the Milo Yiannopoulos escapade, I think it shows that, much like Donald Trump himself, Milo Yiannopoulos was a bit of an unexploded grenade. You know, this was bound to happen. This is the man who is so, quote-unquote, “politically incorrect” that he is willing to say things—you know, forget political correctness—that are outrageous and really awful. So, you know, I think that we’ve seen what happened with Yiannopoulos. He basically imploded. He’s lost his book contract. He’s lost his work. And hopefully we won’t have to hear too much more about him. You know, unfortunately, that’s not the case with Donald Trump. He’s the same kind of character, this sort of explosive character. You don’t know what’s coming next. You know, and one thing that is certain, though, is that Donald Trump is certainly not the uniter-in-chief, as he claims. He’s quite the opposite. 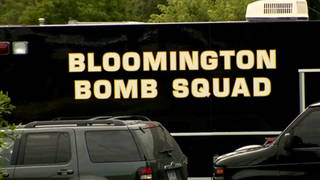