Should Texas Residents Know the Chemicals They’re Breathing After the Arkema Plant Explosion?

Hurricane Harvey has been downgraded from a Category 4 hurricane to a tropical depression as it moves over Louisiana and into Mississippi. Texas officials say at least 44 people were killed by the storm and nearly 100,000 homes are damaged by flooding. This comes as a chemical plant about 25 miles northeast of Houston, in Crosby, was rocked by two explosions early Thursday morning. The facility produces highly volatile chemicals known as organic peroxides, and at least 10 sheriff’s deputies were hospitalized after inhaling fumes. Officials had already evacuated residents within a one-and-a-half-mile radius of the plant in the town of Crosby, after it lost primary and backup power to its coolant system. Harris County Sheriff Ed Gonzalez insisted in an early-morning press conference that the plant had not exploded, describing the event as a “pop” followed by smoke. But Federal Emergency Management Agency head Brock Long said a plume of chemicals leaking from the plant was “incredibly dangerous.” We speak with Matt Dempsey, reporter with the Houston Chronicle who questioned Arkema about what is stored at the plant and who produced the investigative series “Chemical Breakdown,” which examined regulatory failures of the chemical industry.

AMY GOODMAN: Hurricane Harvey has been downgraded from a Category 4 hurricane to a tropical depression as it moves over Louisiana and into Mississippi. In Houston, floodwaters have begun to recede, revealing corpses and mass devastation. Texas officials say at least 44 people have been killed by the storm. Nearly 100,000 homes are damaged by flooding. More than 30,000 people remain in shelters. Health officials are taking steps to minimize the spread of diseases such as cholera and typhoid, and nearly 150,000 homes have been told to boil their water. East of Houston, in hard-hit Beaumont, drinking water is completely shut off, and emergency workers are evacuating Beaumont’s main hospital. Meanwhile, flooding continues in North Houston as the Neches River surged beyond its banks and is expected to rise another foot by Friday afternoon.

This comes as a chemical plant about 25 miles northeast of Houston, in Crosby, that’s swamped by about six feet of water, was rocked by two explosions early Thursday morning that sent thick black smoke into the air. The facility produces highly volatile chemicals known as organic peroxides, and at least 10 sheriff’s deputies went to the hospital after inhaling fumes. Officials had already evacuated residents within a one-and-a-half-mile radius of the plant in Crosby after it lost primary and backup power to its coolant system. Harris County Sheriff Ed Gonzalez insisted in an early-morning press conference that the plant had not exploded, describing the event as a “pop” followed by smoke. But Federal Emergency Management Agency head—that’s FEMA head—Brock Long said a plume of chemicals leaking from the plant is “incredibly dangerous.”

BROCK LONG: So, the bottom line is, is that we do what’s called plume modeling, and that’s what we base a lot of the evacuations on. And so, by all means, yes, the plume is incredibly dangerous.

AMY GOODMAN: This comes as the company, Arkema, has refused to state precisely which chemicals are produced or how many of them are still on site at the time of the explosions. During a call with reporters, Arkema CEO Richard Rowe said the company expected the chemicals on site to catch fire or explode, and admitted it is a way to prevent a fire or potential—it has no way to prevent a fire or potential explosion near the plant. He was questioned by reporter Matt Dempsey with the Houston Chronicle.

RICHARD ROWE: I don’t—I don’t know that we see the need to do that. I mean, all the—they’re all involved with the—the peroxides that we’re discussing.

RICHARD ROWE: I mean, again, I don’t—I don’t—we do not see the need at this time to do that.

AMY GOODMAN: To talk about what we know about what could blow up at the Arkema plant in Crosby, we go now to Houston, where we’re joined by the reporter you just heard questioning the Arkema CEO. Matt Dempsey is a data reporter with the Houston Chronicle who contributed to the investigative series called “Chemical Breakdown,” which examined regulatory failures of the chemical industry. His latest article, “New explosions expected at Crosby chemical plant.”

Thanks so much for joining us on Democracy Now!, Matt. Start off by just explaining what do we know at this point about these chemicals in this chemical plant in Crosby.

MATT DEMPSEY: Right. So, yesterday around 8:30 or 9:00, the company sent me a list of the names of the chemicals, but that is not a Tier II. In fact, I sent a really pretty angry email back saying, “This is not helpful. This is not what we asked for.” And the reason why I want that Tier II chemical inventory is because it has the amounts of the chemicals, and it will tell you what kind of containers those chemicals are contained in. And I’ve also asked for like a map of the facility. Yesterday, at the press conference in the morning, they told—they assured me that they would provide a Tier II. They assured me they’d provide a map of the facility. I have gotten neither of those things. I have asked for—a bunch of other questions that remain unanswered.

AMY GOODMAN: What do you mean by Tier II, Matt?

MATT DEMPSEY: All right. So, the Tier II is a chemical inventory that’s required under the—under EPCRA. It’s the Emergency Preparedness and Community Right-to-Know Act, I believe. So, that requires companies who have certain types of materials—it’s pretty broad—to send a list of what chemicals they have, the names of them, a chemical index code, the amounts of them, where they’re located, what kind of containers they’re in, to local law enforcement, to the state, to local emergency planning committees. And it’s supposed to be used for emergency preparedness.

AMY GOODMAN: So, you were in Crosby yesterday?

AMY GOODMAN: Can you explain how it’s possible that when you have 10 sheriff’s deputies that go off to the hospital, that the public cannot know exactly what chemicals are poisoning people, not to mention the cause of this one-and-a-half-mile radius that has been evacuated around the plant?

MATT DEMPSEY: Right. It’s challenging. I mean, like I said, there is a federal right-to-know law, but that federal right-to-know law has a clause in it that says it can’t override any state law. And nationwide, not just in Texas, though it’s been particularly bad in Texas, that law has been chipped at—right-to-know has been chipped away by states, making it harder and harder to get access to these chemicals. So, I can ask. I can ask questions. I can bug the company. I can send emails and make calls to the state and other agencies. But it’s just very difficult to make any progress, because they’ve made it so that they can use terrorism as—the threat of terrorism as an excuse, in Texas, to shut down access to most chemical inventories.

FIRE CHIEF BOB ROYALL: We’re trying to make sure that our citizens are comfortable in what’s going on and that they know the truth. And so, with that, these are small container ruptures that may have a sound—excuse me—may have a sound of a pop or something of that nature. This is not a massive explosion.

MATT DEMPSEY: I know Chief Royall. He’s a good man. He’s actually a really smart expert at hazardous material response for the Harris County Fire Marshal’s Office. He’s probably one of the most experienced people at that in the country.

My impression of what he’s doing there is trying to be as accurate and precise about what he’s describing to the public as possible. I think there was a lot—I think, especially in response to—being in Crosby, there is tons of rumors going on. And it would be easier if the public—if government officials were more clear about what is going on and what’s not going on. So, my thought is, when I heard that, because I was in route when he said that—my thought, when he said that, was that he’s trying to make sure people don’t think that there’s going to be like a shockwave blast from this. And he’s right. There probably won’t be a shockwave-type blast, like something you’d see in the movies or something like—or an action movie. But yeah, it’s going to be a fire.

And my concern—my concern continues to be not the organic peroxides exploding and catching fire, which is dangerous. My concern is there are tanks of sulfur dioxide and isobutylene that are very large tanks. In their worst-case scenario report that they filed with the—that Arkema filed with the EPA, that said that, you know, if that stuff ruptures, then we have a really serious problem on our hands. I know people think this is serious. It is. But if that stuff goes out, gets released, then you have a very, very big problem.

So, I keep asking Arkema, “Where are the tanks?” They say they’re in a remote area far away from the organic peroxides. So I’ve specifically asked, “How many feet away?” That’s why I asked for a map of the facility. “Can you show me where the organic peroxides are and where the tanks are, so I can reassure people, more than just ’They’re far away’?” You know, and they’ve refused to have done that at this point.

AMY GOODMAN: We’re going to break and then come back to this discussion. We’re talking to Matt Dempsey, the data reporter at the Houston Chronicle, who was in Crosby, the lead reporter on the paper’s series “Chemical Breakdown,” which investigated regulatory failures of the chemical industry. His new article, “New explosions expected at Crosby chemical plant.” This is Democracy Now!

AMY GOODMAN: That’s Aric Harding, a Houston resident who went home—his house is flooded—playing his piano, only the keyboard above the water in his house. 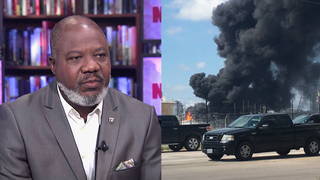