Amid increasing concern over chronic traumatic encephalopathy, or CTE, a degenerative brain disease linked to repeated blows to the head, a recent study of the brains of 111 deceased NFL players found all but one were found to have CTE. We speak with Dr. Harry Edwards, sociologist, author and sports activist, who says a consequence of CTE that is largely overlooked is the lack of alternative job opportunities for black players. We’re also joined by Donté Stallworth, sports commentator and former NFL player who spent 10 years in the league.

AMY GOODMAN: I want to ask, before we get to the end, about CTE, about brain injury, about these super athletes and what they’re experiencing, Dr. Harry Edwards. And I want to get Donté in on this, as well—

HARRY EDWARDS: Well, first of all, the whole issue—

AMY GOODMAN: —111 brains examined and 110 of them suffering from CTE, after these players have died.

HARRY EDWARDS: Every athlete that I know in the NFL, have talked to about this, is concerned about it. Athletes that I knew, going back to the 1985 Super Bowl with the San Francisco 49ers, they’re concerned about it. The one thing that is going to happen here as a consequence of this that nobody is looking at is the fact that it’s going to become a predominantly black league, because that’s who’s going to be playing football. It already looks like—when you talk about not who’s on the roster but who’s on the field, it already looks like Ghana playing Nigeria. It’s going to become even blacker, because that is who is going to be playing football. There are fewer opportunities for these black athletes to move into other areas. Oftentimes they don’t trust the medical profession in any event. And as one mother told me, “You’re telling me about CTE that might impact them 25 years from now, when my child could get his head blown off going to football practice right here in this community. We’ve got to get up and out of here, so he’s going to play football.” So, at the end of the day, we’re looking at a league that’s going to be overwhelmingly black, which brings additional emphasis and importance to the stand that owners and coaches and others have taken now. That’s a side effect of the CTE thing that nobody’s talking about.

As far as the impact of hitting in football, there’s only so much hitting that you can take out of football before you have dodgeball. Already, we have protected positions: long snappers, centers, quarterbacks, kickers, punters and so forth. How much further down that road can they go? That becomes a contradiction that football has not figured a way out of, down to the Pop Warner level.

AMY GOODMAN: Wow! There is so much to talk about. Ten seconds, Donté Stallworth, just to get your response.

DONTÉ STALLWORTH: I think the CTE thing is going to be there for a while. It’s not going to go away. Players are now becoming concerned more and more about not only their careers, but about their children and the other people that they care about. They want to know what the research is on this, and it’s only becoming more and more prevalent that we’re finding out more and more about this degenerative disease.

AMY GOODMAN: We have to leave it there, former NFL player Donté Stallworth, Dave Zirin of The Nation and Dr. Harry Edwards, author of The Revolt of the Black Athlete. 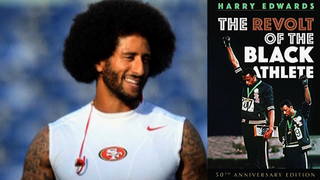