Amid growing calls for the creation of an independent probe into human rights violations in the U.S.-backed Saudi bombing campaign in Yemen, we speak with Radhya Al-Mutawakel, chairwoman of the Yemeni NGO Mwatana Organization for Human Rights. She became the first representative of Yemeni civil society to brief the U.N. Security Council on the war in Yemen. The three-year war in Yemen has killed more than 10,000 civilians, ravaging the country’s infrastructure and triggering a massive cholera outbreak.

AMY GOODMAN: This is Democracy Now!, democracynow.org, The War and Peace Report. I’m Amy Goodman, as we turn now to the U.S.-backed Saudi bombing campaign in Yemen that’s been raging for three years, killing more than 10,000 civilians in the Arab world’s poorest country. The conflict has ravaged the Yemen’s infrastructure, stripped the country of social services, triggered a massive cholera outbreak.

Now there are growing calls from around the world for the creation of an independent probe into human rights violations committed by both sides, and this week the U.N. Human Rights Council is slated to vote on a resolution to launch an investigation sponsored by the Netherlands, Canada, Luxembourg, Belgium and Ireland. Meanwhile, the Associated Press reports Saudi Arabia responded to the proposal with threats, sending a letter to two of the sponsoring countries that said if independent investigators are sent to Yemen, it could negatively affect trade and diplomatic ties with the wealthy kingdom of Saudi Arabia.

Well, for more, we’re joined by Radhya Al-Mutwakel, chairwoman of the Yemeni NGO Mwatana Organization for Human Rights. In May, she became the first representative of Yemeni civilian society to brief the U.N. Security Council on the war in Yemen. She’s also calling for the establishment of this international commission.

Radhya, welcome to Democracy Now! Tell us what you’re calling for and talk about the international probe that’s been proposed by a number of countries, being opposed by the country that’s bombing Yemen right now, Saudi Arabia.

RADHYA AL-MUTAWAKEL: Yeah. For the first—this is the first year that—since 2012, that NGOs and some countries are trying to push for the international independent inquiry, but it never happens, not because the situation in Yemen doesn’t deserve such a tool, but because Saudis, they don’t want such thing to be happened. So, it’s a very negative message. It’s just like a green light for all parties of the conflict, not only Saudis and Emiratis, but also these armed groups on the ground, as they have the green light to do violations. And we can see that, from year to another in Yemen, the violations are increasing, and there is no any kind of accountability.

AMY GOODMAN: So, talk about the ravaging of your country, 10,000 people dead. It’s 600,000 infected with cholera at this point because of the devastation of the infrastructure?

RADHYA AL-MUTAWAKEL: Yes. And already 2,000 people, only in four months, have been killed because of the cholera. Cholera should be something that you can be treated of, but because the health system in Yemen is collapsed because of the war, then 2,000 people was killed. Because—we have also the minister of famine. More than 7 million people are just—they might just face the famine. All humanitarian agencies, they have emphasized that this situation in Yemen, it’s a humanitarian disaster, but it’s a man-made disaster. It is because of the conflict. So, all the violations that have been committed by different groups, in the ground and in the air, just led to this humanitarian situation in Yemen. So we think that a international independent inquiry is not a huge thing. It’s just one small step to send a message to those parties to the conflict that they can’t go on with their violations. But what is very disappointing, that even this small step was not done, because one of the countries, which is Saudis, they don’t want it to be done.

AMY GOODMAN: Why does Saudi Arabia not want to be investigated?

RADHYA AL-MUTAWAKEL: Because they have committed a lot of violations in Yemen. Saudi Arabia, with the coalition, with Saudi and Emirati coalition, I mean, they have striked everything in Yemen. We in Mwatana has documented more than 132 incidents, when thousands of civilians were killed and injured. Most of them was children and women. But I want to say that not only Saudi Arabia and Emirates who really deserves to be—

RADHYA AL-MUTAWAKEL: Yeah, the United Arab Emirates. We also have the Yemeni armed groups in the ground, Houthi and Saleh armed groups, and other armed groups that, under the umbrella of Hadi president, they are also committing violations. And the international independent inquiry should investigate the violations of all these groups. But Saudi Arabia is just acting as they are the only one who’s committing violations, and they’re just against this international independent inquiry.

AMY GOODMAN: What about the role of the U.S.? President Trump’s first trip, this was unprecedented. His first foreign trip was to Saudi Arabia, famously doing the sword dance, his family being there with him, talking about them as dear friends. Of course, President Obama had been there before, something like four times. But what are your thoughts on the U.S. military deals with Saudi Arabia and Amnesty International’s recent finding involving the American bomb that killed an entire family in Sana’a?

RADHYA AL-MUTAWAKEL: Yes. Well, while the U.S. can play a very positive role in building the peace in Yemen, which is very possible, they are fueling the war by political support and also by the arms transfer to Saudi Arabia. So, they can do—and they transfer these—I mean, the weapons to Saudi Arabia. At the same time, they don’t support the international independent inquiry. So, we can say that they are fueling this war. It’s not only the U.S. It’s the U.S. and the U.K. and also France, and some other countries are involved also in sending weapons to Saudi. So we can say that the international—the financial interests became here more important than blood of innocent people, which is really sad.

AMY GOODMAN: So, what do you want to happen right now? There is the most—one of the most painful quotes recently, that just came out, is as people describe the situation. Oh, Jamie McGoldrick, the U.N. humanitarian coordinator in Yemen, told a group of reporters, September 20th, he sees “no hope on the horizon” for Yemen, saying, “The prescription for the future is bleak—at the very best [it’s] bleak. [It’s] a disaster. [I think] the humanitarian crisis [is going to get] much, much worse. People [are] dying in corners of the country in silent deaths. You’ve got 400,000 kids under the age of five who are acutely malnourished. And those numbers [are] growing because [50 percent] of health structures don’t work. Seventeen hundred schools don’t function. Thirty thousand health workers don’t have salaries. [There’s] no operational budgets. Two million kids [are] out of school. It’s a lost generation.”

RADHYA AL-MUTAWAKEL: So, it is a very serious and bad situation, but the hope is there, which is really sad about Yemen, that peace is always possible, but it never happens, not because the situation is complicated, because no one cares. So, when we just come even to international independent inquiry, which I said it’s a very small step, it never happens in Yemen. And we think that such international independent inquiry will just help peace process. There are some countries who are trying to do a fake link between immunity and peace, which we have tried this in 2011 in Yemen, and it has never worked. It will never work. Accountability will just bring peace and will just make some pressure on parties to the conflict to go to the table.

So, it’s a disaster, but the hope is always there. And now it’s possible more than any other time, because now most of these armed groups, including Saudi Arabia and other countries, are still with political leaders, and they can be pushed or encouraged to go to the table. But now Saudi Arabia and the United Emirates, they are empowering fanatic religious groups in the areas that they are controlling with President Hadi. Those fanatic religious groups will never go to the table, if they’re empowered and extend more and more. They will never go to table. They don’t care about the international independent inquiry. And they will be the most dangerous future for Yemen. So the chance is now, and it’s still very possible.

AMY GOODMAN: Do you plan to go back to Yemen?

RADHYA AL-MUTAWAKEL: Yes, because I have Mwatana. We are a team of 60 people. So they need me. But I’m here—

RADHYA AL-MUTAWAKEL: Yeah. But I’m here for security reasons, because there was a lot of hate campaign against Mwatana and the leaders of Mwatana. But I will come—I will go back, I mean, at any moment.

AMY GOODMAN: Well, please be safe, and thank you for—

AMY GOODMAN: —stopping by to talk about the crisis in Yemen. Radhya Al-Mutawakel, a Yemeni activist, chairwoman of the human rights NGO Mwatana Organization for Human Rights.

This is Democracy Now!, democracynow.org, The War and Peace Report. When we come back, we’ll be joined by the Nobel laureate, the Nobel Peace Prize winner Muhammad Yunus from Bangladesh. Stay with us.

AMY GOODMAN: “Why is It So Hard?” by Charles Bradley, known as the “Screaming Eagle of Soul.” He died Saturday in New York at the age of 68. 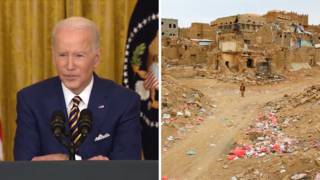