“Are You a U.S. Citizen?”: Trump Could Sabotage the 2020 Census by Adding Controversial Question

The Trump administration says its request to add a question on citizenship status to the 2020 census is under legal review. Data from the once-a-decade census has major implications for shaping the political landscape. The population count is used to determine how congressional seats are distributed across the country and where hundreds of billions of federal dollars are spent. Critics say that including a citizenship question on the census will deter undocumented residents from participating in the questionnaire out of fear that the government could use the information against them. Trump’s request to add a citizenship question to the 2020 census would “sabotage the entire census,” says Ari Berman, senior writer at Mother Jones, and “massively depress responses among immigrant groups.”

JUAN GONZÁLEZ: Well, on Friday, the Trump administration said its request to add a question on citizenship status to the 2020 census is under legal review. The Commerce Department, which oversees the Census Bureau, now faces a March 31st deadline to evaluate the legal basis for the controversial question’s inclusion in the upcoming census.

Data from the once-a-decade census has major implications for shaping the political landscape. The population count is used to determine how congressional seats are distributed across the country and where hundreds of billions of federal dollars are spent.

AMY GOODMAN: Critics warn that including a citizenship question on the census will deter undocumented residents from participating in the questionnaire out of fear the government could use the information against them.

For more, we’re joined by Ari Berman, senior writer at Mother Jones, reporting fellow at The Nation Institute, author of Give Us the Ballot: The Modern Struggle for Voting Rights in America. His new for piece for Rolling Stone, “How the GOP Rigs Elections.”

AMY GOODMAN: “Are you a U.S. citizen?” They will possibly ask this question. Talk about it.

ARI BERMAN: It sounds like a simple question, but the experts that I talked to say that it will destroy and sabotage the entire census, that given the climate of fear with the Trump administration, nobody, particularly immigrant groups, both noncitizens and citizens, want to answer the question, if they’re a citizen, for fear of how it will be used by the Trump administration. If this question is on the census, it will massively depress responses among immigrant groups.

That will lead to fewer seats, fewer resources, for areas that have lots of immigrants, particularly Democratic areas, places like New York and California. And it will shift power even more to Republican areas, that are whiter and more conservative. So, this has very, very, very profound implications for our democracy. And the 2020 census is already facing an extreme number of problems, and this will just make it that much worse.

ARI BERMAN: Exactly. The census is supposed to count every person in America, noncitizen or citizen. And it’s really a constitutionally mandated accurate count. So, if the census is manipulated for political purposes or the count is done wrong, there is no way to fix that, because the census is supposed to be the final word that determines how districts are drawn, how $600 billion in federal funding is spent. This is one of the most important things the federal government has done, every 10 years since 1790. And it’s facing unprecedented threats from the Trump administration, from lack of funding, to the people that might run it, to this question about citizenship. It’s a perfect storm facing the census right now.

AMY GOODMAN: Who’s behind this?

ARI BERMAN: Well, first off, the Constitution very clearly says, with regards to the census, that all persons should be counted. Secondly, there was a Supreme Court case in 2016 called the Evenwel case, that came out of Texas, where they dealt with this question. The Supreme Court very clearly said, in an 8-to-0 unanimous opinion, that districts should be drawn based on all people, because everyone here deserves representation, everyone here counts. When someone goes to a hospital, they don’t ask you, “Are you a citizen or not?” Everyone deserves to be treated. And this would radically redefine American society by asking if you’re a citizen or not on the census. 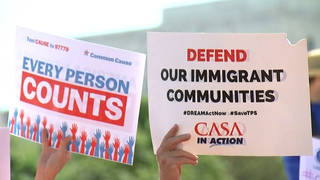