We speak with Ari Berman, senior writer at Mother Jones and a reporting fellow at The Nation Institute, about his new for piece for Rolling Stone titled “How the GOP Rigs Elections.” “We like to think in this country, if you get the most votes, you’re the winner. But that’s not how it works, because of gerrymandering right now,” Berman notes.

JUAN GONZÁLEZ: Ari, I wanted to ask you about another topic you’ve written a lot about, the issue of gerrymandering, especially in several states. There are several court cases now that have—appear to be headed toward the Supreme Court decision on political gerrymandering. Could you talk about—gerrymandering has existed for—ever since districts have existed in the United States. What’s different about what’s been happening in the last few years under Republicans in some of the local states?

ARI BERMAN: Well, gerrymandering has existed forever, but it’s gotten so much worse in recent years, with the maps being so sophisticated in terms of how they’re drawn, and Republicans, in particular, targeting Democrats in such sophisticated ways. So you have situation in Wisconsin, for example, which is where my new piece in Rolling Stone is set, where, in 2012, Democrats won 51 percent of the vote in Wisconsin, but Republicans picked up 60 of 99 seats in the Wisconsin State Assembly. So you have a situation in America, not just in Wisconsin, but in other states, as well, where Republicans are getting a minority of votes but a majority of seats. And that violates basic norms of American democracy. It violates the whole notion of one person, one vote. We like to think in this country, if you get the most votes, you’re the winner. Well, that’s not how it works, because of gerrymandering right now.

AMY GOODMAN: And explain the role of Governor Scott Walker of Wisconsin.

ARI BERMAN: Well, Wisconsin has really been the test case, the laboratory for the Koch brothers and so many other people, for destroying the progressive movement and corrupting democracy. And Scott Walker has led this effort. Wisconsin, since he took over in 2010, has passed the worst gerrymandering in the country, the worst voter suppression laws and the worst dark money laws. And what they’re doing is they’re systematically corrupting every lever of democracy to try to give Republicans more power.

And they’ve turned a purple state, a state that gave birth to unions, to Social Security, to so many other important progressive achievements—they’ve turned it into a laboratory for the Koch brothers and other big money interests to have their way. And they’ve decimated all the things that made Wisconsin such an important progressive state historically. And this is the model that Republicans want to export all across the country. And that’s why I set my Rolling Stone article in Wisconsin, because what happens there has had major national ramifications all across the country.

JUAN GONZÁLEZ: And how is it that they’re able to, through more sophisticated gerrymandering, get such large majorities, even though they have a minority vote? Could you talk about the cracking and packing and the different methods that they use?

ARI BERMAN: Well, I talk about one state Senate district in Wisconsin which was a 50-50 state Senate district, in Racine, in southeast Wisconsin. And basically, what they did is they drew a district so that a GOP state senator, his house remained in his Democratic neighborhood, but all of his neighbors were drawn out of his districts. I’ve never even seen something like this before. You go to his house, you go two houses down. He lives in a Democratic neighborhood. All his Democratic neighbors have been removed. And instead, they gave him all of the Republican countryside of Racine and Kenosha counties. So, that’s how they’ve turned a 50-50 swing district, previously, into a firmly Republican district. And that kind of thing, both spreading Democrats out—the cracking—and then isolating them into a few areas—the packing—is how Republicans have gerrymandered all across the country.

AMY GOODMAN: What does this all mean, as we wrap up, for the 2018 midterms?

ARI BERMAN: What it means is that a lot of people think that Democrats are going to win, but Democratic chances are going to be hurt by gerrymandering, by voter suppression, by dark money. And regardless of what happens with the political parties, our democracy is under attack on so many different fronts, from gerrymandering, from voter suppression, from unlimited corporate spending. And that’s really what should worry all of us. No matter who wins the election, we’re living in a rigged system right now.

AMY GOODMAN: Ari Berman, we want to thank you for being with us, senior writer at Mother Jones, reporting fellow at Nation Institute, author of Give Us the Ballot: The Modern Struggle for Voting Rights in America. We’ll link to your new piece in Rolling Stone, “How the GOP Rigs Elections.”

And that does it for our show. Democracy Now! is hiring a full-time news fellow. Submit your application by February 5th. Find out more at democracynow.org.

And you can sign up for our daily digest and news headlines by texting the word “democracynow”—one word—to 66866. 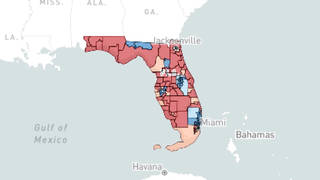