As 2018 Midterms Approach, Native American Women Are Running for Office in Record Numbers

A record number of Native American women are running for office in the midterm elections. At least four candidates are vying to become the first Native American women elected to Congress, including Deb Haaland in New Mexico and Sharice Davids in Kansas. Three Native women are running for governor, and 31 are running for seats in state legislatures. In Fargo, North Dakota, we speak with Tara Houska, national campaign director for Honor the Earth and an Ojibwe lawyer. In Anchorage, Alaska, we speak with Mark Trahant, editor of Indian Country Today. He’s a member of the Shoshone-Bannock Tribes. In Seattle, Washington, we speak with Gyasi Ross, a member of the Blackfeet Nation and host of the podcast Breakdances with Wolves.

Mark, let’s go to you in Alaska. You’ve been writing a lot about this in Indian Country Today, about the record number of Native women who are running for office in the United States.

MARK TRAHANT: Yes. And just this week, history was made when Valerie Davidson became the lieutenant governor of Alaska, the first Native American woman to hold that office in any state in the country. She’s Yupik. She’s one of four other Native women running for lieutenant governor across the country. In fact, in Minnesota, no matter what happens, it will be an Ojibwe woman who will be the next lieutenant governor of Minnesota—Red Lake Nation for the Republicans in Donna Bergstrom, and Peggy Flanagan for the DFL in Minnesota, and she’s White Earth Nation. So, this idea—just this year, everything is just lit up. Candidates decided this was the time to run.

Deb Haaland is a great example. Even though it’s because of—she said in her announcement—because of Standing Rock and because of Donald Trump, there’s also this long arc of—she’s been working at this for 20 years, and she’s built a résumé that’s ready for this job. And that’s part of the case in this story, if you look around the country, is there’s so many women who are prepared, and this is the moment they chose to run.

NERMEEN SHAIKH: So could you talk about the context? You said Trump being in office has something to do with it, but how is it that Native American women organized to run in this election?

MARK TRAHANT: Well, definitely the administration and its policies was a motivating force, particularly the policies against women. One of the great stories is how the Native American women candidates have created this network. Early on, I started writing about this. I used a hashtag, #SheRepresents, and very soon after that, the fashion designer Bethany Yellowtail decided to make shirts called SHE REPRESENTS and list all of the Native American women running for office. They formed an informal network. They reach out to each other. They support each other. They help fundraise. Sharice Davids and Deb Haaland have campaigned together both in Kansas. Paulette Jordan was at Deb Haaland’s campaign the night of the primary win, and making calls for her and knocking on doors. The network they’ve created may be the most lasting institution out of this whole election.

AMY GOODMAN: Tara Houska, can you talk about what’s happening in Minnesota? In Minnesota, you have a situation where no matter who wins will be a Native American woman. We’re talking about the state representative, Penny Flanagan, versus Republican Donna Bergstrom, both running for lieutenant governor.

TARA HOUSKA: Yeah. You know, that’s been the frustrating part, I would say, about this whole Warren debacle and like the concept of Native identity being played out by two white folks, is that there is this historic representation of Native women running across the country. There is also the Indian Child Welfare Act coming under fire and the very core of federal Indian law being put into question by that. There is the Bayou Bridge pipeline. And in Minnesota where we’re looking at two potential Native women that are going to hold the lieutenant governor seat, at the same time we’re looking at a massive resistance of indigenous people that is building against the Line 3 project, Enbridge’s Line 3 tar sands project. That’s actually where I’m coming from today. So, you know, we’re seeing this swell of—

TARA HOUSKA: —indigenous representation at the same time that we’re trying to hold back the worst of what’s happening.

TARA HOUSKA: Yeah. You know, I think that Native people, as people who are still very connected to the land, to the water, are taking these leadership roles in fights all over the country and all around the world to protect the existing resources, to protect the existing water resources for us all. As we see climate change raging around us, we’re trying to protect the last of what’s still remaining to us and protect our communities and protect those around us for the next generation. So, as that’s happening, it’s also in tandem with this rising up of women, and particularly women of color, into representation. But hopefully, you know, we can get a good balance between the two so we’re able to all survive, as climate change is the greatest problem facing this world.

AMY GOODMAN: And, Tara, how important is it that women were also leading the battle against the Dakota Access pipeline and inspiring women? You’re in North Dakota right now. I wanted to talk about the Supreme Court in North Dakota, and also indigenous activists fighting a daily battle in the swampland of Louisiana against the Bayou Bridge pipeline, the 163-mile pipeline being built by Energy Transfer Partners, the same company behind DAPL. Water protectors have repeatedly been arrested for protesting and face felony changes under a harsh new anti-protest law signed by Louisiana’s governor earlier this year. Pipeline construction is scheduled to end before the new year.

TARA HOUSKA: I think that women, as we’ve seen with the #MeToo movement really building, and we’ve seen the Women’s March, and we’ve seen women being this backbone of so many different movement spaces, including indigenous resistance against these extractive industry projects—it’s women taking on this role of leadership that’s sorely, sorely needed. It’s women recognizing that missing and murdered indigenous women is an epidemic across this country, across Canada, that these can be directly—that these cases of women can be directly tied to the extractive industry.

And also, sitting here in North Dakota, where I know there’s many women organizers rushing to try to get people home addresses so they can actually participate in the election—you know, the very notion of indigenous people not being able to participate in the election of a country that started after our nations existed. It’s women taking on so many different roles, and I think it’s something that is really, really needed in this time, this very critical time of potentially our very survival being called into question with the latest reports of what’s happening and where we’re at with climate change.

NERMEEN SHAIKH: And, Gyasi Ross, could you also comment on that issue, the issue of voter ID laws that could potentially restrict the participation of Native Americans in the upcoming elections?

GYASI ROSS: I think that Tara—excuse me—spoke about the germane part about it, which is that people are trying to be proactive. Tribes and individual Native organizers are trying to do the best that they can do with a bad situation, where the Supreme Court—excuse me, my mouth is dry—of the United States already passed and said that they’re not going to weigh in substantively on this issue.

Obviously, this is an issue that goes back to 2013, when this initial voter ID law was passed. And it’s interesting, just as a historic matter, that the previous governor of the state of North Dakota said that there’s never been any sort of voter fraud issue. This was something that was 100 percent the result of partisan politics. And I hate to make this about partisan politics, but this was the result of a Republican-controlled Legislature with the intent of disenfranchising Native voters.

AMY GOODMAN: We want to thank you all for being with us, and we’re going to do Part 2 of this discussion. We’re going to post it under web-exes online at democracynow.org. In Seattle, Gyasi Ross, author, speaker, lawyer, storyteller, member of Blackfeet Nation, host of podcast Breakdances with Wolves; in Fargo, North Dakota, Tara Houska, national campaign director for Honor the Earth, Ojibwe from the Couchiching First Nation; in Anchorage, Alaska, Mark Trahant, editor of Indian Country Today, member of the Shoshone-Bannock Tribes.

That does it for our show. I’ll be speaking in Gainesville, Florida, on Friday night and in Melbourne, Florida, on Saturday night. Check our website at democracynow.org. 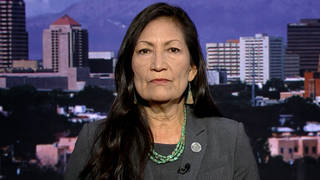