The United States and Canada have reached a tentative agreement to save NAFTA, the North American Free Trade Agreement, with a new trilateral deal that will be known as the United States-Mexico-Canada Agreement. The Trump administration is touting the agreement as a victory for American dairy farmers, since Canada has agreed to open part of its dairy market to U.S. imports. But the Trans-Pacific Partnership, which Trump withdrew from last year, would have provided the same opening. The new deal does not resolve a dispute over U.S. tariffs on Canada’s steel and aluminum exports. The proposed deal must now be ratified by lawmakers in the three countries. We speak with Lori Wallach, director of Public Citizen’s Global Trade Watch and author of “The Rise and Fall of Fast Track Trade Authority.”

Web ExclusiveMay 19, 2017VIDEO: Migrant Farmworkers May Have Been Sickened by Toxic Pesticide Greenlighted by EPA Under Trump

JUAN GONZÁLEZ: Well, the United States and Canada have reached a tentative agreement to save NAFTA, the North American Free Trade Agreement. The new trilateral deal will have a different name, will be known as the United States-Mexico-Canada Agreement. President Trump celebrated the deal Monday.

PRESIDENT DONALD TRUMP: It’s my great honor to announce that we have successfully completed negotiations on a brand-new deal to terminate and replace NAFTA and the NAFTA trade agreements with an incredible new U.S.-Mexico-Canada Agreement called USMCA—sort of just works. MCA. … So, we have negotiated this new agreement based on the principle of fairness and reciprocity. To me, it’s the most important word in trade, because we’ve been treated so unfairly by so many nations all over the world, and we’re changing that. … Once approved by Congress, this new deal will be the most modern, up-to-date and balanced trade agreement in the history of our country, with the most advanced protections for workers ever developed.

JUAN GONZÁLEZ: The Trump administration is touting the agreement as a victory for American dairy farmers, since Canada has agreed to open parts of its dairy market to U.S. imports. But the Trans-Pacific Partnership, which Trump withdrew from last year, would have provided the same opening. The new deal does not resolve a dispute over U.S. tariffs on Canada’s steel and aluminum exports. The proposed agreement must now be ratified by lawmakers in the three countries. On Monday, Canadian Prime Minister Justin Trudeau hailed the tentative deal.

PRESIDENT ENRIQUE PEÑA NIETO: [translated] The new deal promotes more responsible regional commerce in the fields of labor and the environment. It drives the creation of more jobs and better salaries, to the benefit of the workers of the three countries. It grants full certainty to international commerce and investment. It promotes the use of new technologies in business, financial services and other sectors. It strengthens the competitiveness of North America as an industrial platform.

AMY GOODMAN: To talk more about the agreement, we go to Washington, where we’re joined by Lori Wallach, director of Public Citizen’s Global Trade Watch, author of The Rise and Fall of Fast Track Trade Authority.

Welcome back to Democracy Now!, Lori. I haven’t seen this explained in any comprehensible way. What is this new deal? How does it differ from NAFTA? And are you supporting it?

LORI WALLACH: I think the jury’s still out on where unions or groups like Public Citizen will be, and Democrats in Congress, because it’s still kind of a work in progress. The way I would describe the deal is, it’s not a transformational replacement of the old corporate-rigged system of trade agreements, that really NAFTA hatched in the 1990s, but there actually are some important improvements, particularly with respect to those investor tribunals, the investor-state dispute settlement. But on the other hand, there are some new problems—really outrageous giveaways to Big Pharma—and there’s a bunch of business that’s just not completed. There’s some really improved labor standards. There is a fairly impressive U.S.-Mexico labor rights agreement. But it’s not yet subject to swift and certain enforcement, which makes all the difference.

I would say, if there had to be a position taken right now on this text, you would not see support from unions or groups like ours or most Democrats. But there’s still a ways to go, not just what eventual text will be in Congress—because it’s not until next year, and the Democrats will be a majority—but also what might happen with implementing legislation, for instance, to fix the labor enforcement.

JUAN GONZÁLEZ: Lori, I wanted to ask you about two aspects in particular. You mentioned Big Pharma. What is going to be the impact, from what you can tell, of this on the fact that many Americans have been going, for years now, to Canada for cheap generic drugs that they’d otherwise have to pay much more for in the United States? And also, what’s been going on with—what does the deal say about the oil industry of Mexico? Because the incoming president, López Obrador, has made it very clear that he does not want to open up the Mexican oil industry to outside investors. What happened with that?

LORI WALLACH: Well, López Obrador, AMLO, signed off on this deal. He had a negotiator there for the last three months. And to be 100 percent frank, I’m surprised, in a way, that they did, because there is some locking in of the existing privatization. It gives him discretion to reverse any further privatization of the oil sector. But the thing that’s really peculiar—and actually, the Mexican peasant farm movement has come out hollering about this—is, even though AMLO’s guy was at the table, they didn’t do anything to change the rules in agriculture that would probably be necessary for AMLO to be able to deliver on his campaign promises to help support more small farming, rural economies. NAFTA made Mexico get rid of whole system of subsidies and price supports, and there was no change to that part of the agreement. So, several of the peasant farm groups, big supporters of AMLO, have said, “That’s not agreeable. That has to change.” AMLO said he’s not going to change it, and he’s happy with the deal.

As far as the Pharma stuff, so this is, you know, one of the worst parts of the agreement. The way I would describe this agreement, in a way, is, if the enforcement of the labor and environmental chapters was made much better—and the environmental chapter was fixed up some—and given they have largely removed investor-state dispute settlement threats—more on that later—then this could be a deal that was heading in the right direction, but for some bad things that got added in. And that is to say the Pharma stuff would give a 10-year exclusivity for biologic medicines—those are the drugs that right now are sort of the cutting-edge cancer drugs, it’s drugs they use for Crohn’s disease, rheumatoid arthritis—and those drugs in the U.S. can be $100,000 per person per year. And so, the U.S. already has a ridiculous, outrageous 12-year exclusivity. Obviously, we need to fight to get rid of that. So, putting this into NAFTA could kind of handcuff the space Congress needs in the future to fix our problem. But exporting it to Mexico and Canada is really bad news. So, for Mexico, they have no exclusivity, so from zero to 10. And Canada, which was one of the countries that fought back against this in the TPP and won, totally caved. This was part of the U.S.-Mexico deal. Canada didn’t fight back at all. And for Canada, they have an 8-year exclusivity. So, probably, for the folks who go over to Canada to get the meds, these are not those kind of meds. These are injectables. They have to be in the fridge. They are large-molecule drugs. But there are all kinds of other things in that chapter that could make medicine in Canada more expensive, things like what’s called evergreening, ways to get longer patents after a patent kind of runs out. There’s bad stuff. It’s a bad chapter.

AMY GOODMAN: Dairy farmers, auto workers—can you explain what happens in each case?

LORI WALLACH: So, the agreement basically gives a little bit more access for U.S. dairy farmers into Canada. I don’t know if that’s good or bad, because basically it undermines what’s called the supply management system in Canada, which is a system that has led for much more stable and better prices for Canadian small dairy farmers. We used to have that in the U.S., and NAFTA and WTO killed it. So, it’s, I think, not a catastrophe for the Canadian farmers, and probably, on balance, better for the U.S. farmers.

On auto workers, so one of the things that’s innovative in the agreement, and that’s new and kind of interesting, if it works the way it’s written, is, for a certain share of auto—completed autos and auto parts, the workers have to make $16 an hour or more in the jobs in order for those products to qualify for the NAFTA benefits. It’s the first time there’s been a wage link between the privileges of a trade agreement and what workers make. However, we have to see how that works in practice.

There’s also a really—probably the best thing in the whole agreement is they get rid of the broad investor rights that help promote outsourcing, that make it cheaper and less risky. And so, you know, rules like the minimum standard of treatment are gone. With respect to the U.S. and Canada, the whole investor-state dispute settlement system is eliminated, terminated. It phases out in three years. With the U.S. and Mexico, they basically roll way back that system, as far as the corporate rights, and then it—you can only get compensation for, for instance, the government actually taking your stuff, not just because an investor’s expectation was undermined. And then there are some new procedures, for instance, to limit the amount of damages.

AMY GOODMAN: We have 10 seconds. Ten seconds, Lori, for the most important aspect of this?

LORI WALLACH: I would say the punchline is, stay tuned and keep fighting. If we don’t get members of Congress to push on the administration, the necessary labor and environmental enforcement is not going to happen, and then it’s going to be a deal we’re going to have to stop. If we can get these things fixed, and next year we can get some of it improved, unwashed, it could help stop some of NAFTA’s ongoing damage. We will see. It’s a work in progress.

AMY GOODMAN: Lori Wallach, thanks for being with us, of Public Citizen. I’m Amy Goodman, with Juan González. Our website’s democracynow.org. Thanks so much for joining us.

VIDEO: Migrant Farmworkers May Have Been Sickened by Toxic Pesticide Greenlighted by EPA Under Trump 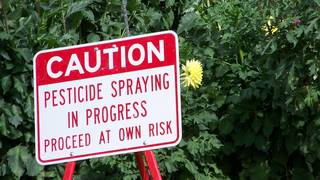 VIDEO: Migrant Farmworkers May Have Been Sickened by Toxic Pesticide Greenlighted by EPA Under Trump