The massacre of 11 worshipers at a Pittsburgh synagogue Saturday capped a hate-filled week in America, following the shooting of two African Americans at a Kentucky grocery store by a white man and the arrest of avid Trump supporter Cesar Sayoc for allegedly mailing 13 bombs to CNN and political opponents of President Trump. We speak with Glenn Greenwald, Pulitzer Prize-winning journalist and one of the founding editors of The Intercept.

AMY GOODMAN: Glenn, we’re speaking to you in this aftermath of the Pittsburgh massacre, what the ADL has described as the worst anti-Semitic attack in the United States in U.S. history. If you could comment, as you look north—but this is your country, the United States—what happened this weekend, and share your thoughts?

GLENN GREENWALD: So, if you look at the social media history of the murderer who entered the synagogue in Pittsburgh, you see something much different than the social media history of the individual accused of sending pipe bombs to various Democratic politicians and media newsrooms. That person, the pipe bomber, seems to clearly have been directly inspired by and formed by Trump and the Trump movement, whereas the killer who slaughtered Jews in the Pittsburgh synagogue is much more of this kind of traditional, neo-Nazi, hardcore KKK white supremacist who sees Donald Trump not as an ally, but as a tool of the Jews and of Zionism. I think he’s much more kind of out on the fringes of American political life. So I think the attempt to try and blame Trump’s or Trump’s rhetoric for this attack is a much harder case to make than for the pipe bomber, who clearly was motivated by Trump’s enemy list.

Nonetheless, once you start creating this atmosphere in a country where scapegoating becomes the norm and where you start encouraging people to look at marginalized and vulnerable minorities as the source of their woes, history teaches that violence against those groups are the inevitable outcome. And so, while I think it would be a mistake, I would be personally cautious, to draw too many lessons about the synagogue shooter—he seems to me to be a very familiar kind of outlier in American history—I nonetheless do think that the climate, not just in the U.S., but throughout the West and democracies generally, has become one where these kinds of—this kind of rage against marginalized groups is becoming increasingly pervasive.

AMY GOODMAN: You know, you can’t say Bowers “tweeted” out a message, you know, attacking Jews and refugees right before he went in and killed Jewish worshipers, because he used Gab. If you could explain what Gab is?

GLENN GREENWALD: So, as we, I think, mostly, most of us know, for a long time Silicon Valley has not wanted to regulate or censor political content. It wanted to view itself as kind of like the AT&T of the internet. Obviously, AT&T doesn’t censor people. If you want to use—if you’re a white supremacist and you want to use the telephone, it lets you. But Silicon Valley has begun, because the public has been demanding it, censoring political content, putting extremists, that they perceive to be extremists, barred from using Facebook and Twitter. And so, as was predictable, other social media companies, making a promise to people not to censor them, began to emerge.

And Gab was designed to essentially allow the far right, censored from Twitter, to migrate there and use social media there. And that’s where this killer, among others, like Milo Yiannopoulos and other neo-Nazis who were banned from Facebook and Twitter, have migrated to, and it’s kind of become a hub of that. And in the wake of this Pittsburgh shooting, they’ve now been censored, in a sense, by private financial firms, that won’t process their payments, and private internet companies, that won’t host their site any longer. It’s an attempt to suppress these views, which never really works, rather than trying to address them or contain them or defeat them.

AMY GOODMAN: And President Trump’s response to what took place, and the progressive Jewish leaders in Pittsburgh saying, “Do not—you are not welcome in Pittsburgh until you renounce white nationalism”?

GLENN GREENWALD: So, I mean, President Trump posted a tweet this morning that I thought was so far over the line of—

GLENN GREENWALD: —what is responsible. I’ve been somebody who’s been—yeah, so, I mean, the thing about CNN being the enemy of the people in the wake of this pipe bombing, like I said, I’m more cautious about blaming Trump for what happened in Pittsburgh [inaudible]—

AMY GOODMAN: Glenn, we have to leave it there, but we’re going to do Part 2 at democracynow.org. Pulitzer Prize-winning journalist Glenn Greenwald. 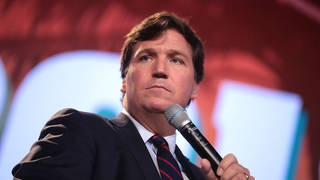