A major new federal lawsuit claims that immigration agents are targeting undocumented organizers for their activism in Vermont. The suit accuses Immigration and Customs Enforcement, the Department of Homeland Security and the Vermont Department of Motor Vehicles of carrying out a multiyear campaign of political retaliation against members of the group Migrant Justice. According to the lawsuit, Migrant Justice was infiltrated by an informant, and its members were repeatedly subjected to electronic surveillance. At least 20 active members of Migrant Justice have been arrested and detained by ICE. We speak with Will Lambek, an organizer with Migrant Justice, a Vermont-based group founded and led by immigrant farmworkers.

NERMEEN SHAIKH: We end today’s show with a major new federal lawsuit claiming that immigration agents are targeting undocumented organizers for their activism in Vermont. The suit claims Immigration and Customs Enforcement, the Department of Homeland Security and the Vermont Department of Motor Vehicles carried out a multiyear campaign of political retaliation against members of the group Migrant Justice. According to the lawsuit, Migrant Justice was infiltrated by an informant, and its members were repeatedly subjected to electronic surveillance. At least 20 active members of Migrant Justice have been arrested and detained by ICE.

AMY GOODMAN: On Wednesday, Migrant Justice members and their allies marched to the federal courthouse in Burlington, Vermont. This is one of the plaintiffs, Enrique “Kike” Balcazar.

ENRIQUE BALCAZAR: [translated] But as we stand up and fight for our rights, we are hunted down and targeted by ICE. And that’s why we are here today, to stand up for our rights and file this lawsuit against ICE and the Vermont Department of Motor Vehicles. In the past two years alone, there have been over 40 community members associated with Migrant Justice who have been arrested by federal immigration authorities. Many of them have since been deported. And in nine of these cases, we have clear evidence that these arrests were retaliatory, targeting people because of their involvement in Migrant Justice. ICE has been persecuting us. They’ve been surveilling Migrant Justice and its membership, with the objective to repress our voice, to keep as quiet, to stop us from organizing for our rights and to take retaliation against us for the way that we express ourselves and when we expose their abuses of power.

AMY GOODMAN: That was Enrique “Kike” Balcazar, who was arrested by ICE and held for almost two weeks.

Democracy Now! reached out to ICE, DHS and the Vermont Department of Motor Vehicles to comment on the lawsuit. ICE responded by saying, quote, “In keeping with ICE agency policy [that] we do not offer comment on pending litigation, we are going to decline to comment on this legal action.”

The lawsuit was filed by the American Civil Liberties Union in Vermont, the Center for Constitutional Rights here in New York, the National Center for Law and Economic Justice and the National Immigration Law Center.

For more, we go to Burlington, where we’re joined by Will Lambek. He is an organizer at Migrant Justice, the Vermont-based group founded and led by immigrant workers.

Will, welcome back to Democracy Now! First, explain what Migrant Justice is, what it has to do with the dairy farms of Vermont, and talk about this novel suit.

WILL LAMBEK: Migrant Justice is an organization founded and led by dairy workers here in the state of Vermont. For nearly 10 years, immigrant farmworkers, who are essential to this state’s economy, holding up one of its most important and iconic industries, have been organizing for their human rights, particularly to improve conditions on the dairy farms, successfully doing so through the Milk with Dignity program. And during those years, they have been targeted by ICE for retaliatory arrests. The organization has been surveilled. And ICE has done so with the assistance of the Vermont Department of Motor Vehicles. And so this lawsuit is seeking an injunction, asking a judge to put an end to ICE’s targeted campaign of retaliation against Migrant Justice and its membership.

NERMEEN SHAIKH: Well, Will, can you explain how you came to know of this surveillance?

WILL LAMBEK: Well, ICE has arrested, as you heard, over 40 people in the last two years alone who have been part of Migrant Justice, including 20 active members of the organization. So the pattern of targeting was very clear to us. In the past year, we have been engaged in litigation to have ICE release internal documents, under the Freedom of Information Act, and those documents have demonstrated even more clear evidence of their surveillance and targeting of the organization.

NERMEEN SHAIKH: Well, why did the DMV get involved in this?

WILL LAMBEK: Migrant Justice was key to passing a law in Vermont in 2013 allowing for the creation of something called the driver’s privilege card, which is a driver’s license available to anybody regardless of immigration status. This was a momentous step forward for human rights in the state. Most immigrants in Vermont live in isolation on rural farms with no access to public transportation, and many were spending years at a time on those farms without ever stepping foot off because of lack of access to transportation. People reported feeling like prisoners on their farms. So, Vermont passed this law, after courageous organizing by farmworkers.

But immediately after its implementation, the DMV went about undermining its implementation by passing on information—confidential information—of driver’s license applicants to ICE. In the case of Enrique Balcazar, who you heard on the tape, ICE sent—excuse me, the DMV sent ICE, just days before Kike’s arrest, his license plate information, as well as his driver’s license application, on which they had written “undocumented” in block letters on the top.

AMY GOODMAN: Last year, Enrique “Kike” Balcazar was among those arrested by undercover ICE agents in Burlington when leaving the Migrant Justice office. Shortly after he was released, he appeared on Democracy Now! I think he was held for about 10 days. He described the immigrant organizing work he was doing at the time of his arrest, particularly around the Milk with Dignity Campaign that he co-founded.

ENRIQUE BALCAZAR: [translated] In Vermont, there is a united community. We work in the dairy industry. And we know that they are, like all over the world, in violation of human rights, things we really do not want to endure. So we organized, and we meet in the community, talk about the problems we are facing and issues of health and so on. So now we are in a campaign, which started based on community priorities, after having had meetings and doing inquiries in the community about what people wanted to do. We created the Milk with Dignity Campaign, which is to guarantee our human rights, to get human rights for dairy workers, in terms of wages, work hours and living conditions. We do hold the big companies responsible, because they are getting rich off of us, the immigrants in that state.

AMY GOODMAN: So, that’s Kike Balcazar, after he was released. Will, among the companies that Migrant Justice has taken on is Vermont’s own Ben & Jerry’s, right? These are dairy farms. If you can talk about what was won there by your organization, by Migrant Justice, and also Migrant Justice’s work passing the Vermont driver privilege card?

WILL LAMBEK: That’s right. So, in October of 2017, Ben & Jerry’s ice cream signed an agreement with Migrant Justice, becoming the first dairy company to join Migrant Justice’s Milk with Dignity program. It’s a binding commitment that requires their suppliers to uphold a farmworker-authored code of conduct, guaranteeing rights and wages, housing, health and safety, scheduling, and to be able to organize free from retaliation and discrimination.

Now over 300 workers in the state of Vermont are covered under this program, thanks to Ben & Jerry’s commitment, and the company is paying a premium to those farms in order to redistribute profits down the supply chain so more money gets into the pockets of both farmworkers and also struggling farmers. And we are campaigning to expand this program to cover more dairy farms and more dairy companies.

This is an example of the type of courageous and transformative organizing that Vermont immigrant dairy workers are involved in. It’s protected by the freedom of speech. People are coming together, assembling and speaking out for their rights. And for their pains, they’re being targeted for surveillance, harassment, arrest, detention and deportation.

NERMEEN SHAIKH: Well, Will, I want to go to the comments that Immigration and Customs Enforcement, or ICE, has made on the case. It’s rejected claims that it targets immigrant rights activists. ICE acting Deputy Director Matthew Albence stated, quote, “U.S. Immigration and Customs Enforcement does not target unlawfully present aliens for arrest based on advocacy positions they hold or in retaliation for critical comments they make. Any suggestion to the contrary is irresponsible, speculative and inaccurate. … ICE focuses its enforcement resources on individuals who pose a threat to national security, public safety and border security.” So, Will, can you respond to that, to what ICE has said?

WILL LAMBEK: Well, it’s demonstrably false, both in the case of Migrant Justice and also nationally. This lawsuit is one of a number happening around the country right now by immigrant community leaders and human rights defenders who have been unfairly targeted by ICE in retaliation for First Amendment activities. From New York to Washington state to Mississippi, immigrant leaders have been targeted by ICE in a de facto national policy of retaliation.

AMY GOODMAN: Will Lambek, we want to thank you for being with us, organizer at Migrant Justice, a Vermont-based group founded and led by immigrant farmworkers. We will follow this lawsuit against ICE and DHS and the Department of Motor Vehicles.

That does it for our show. Democracy Now! is accepting applications for internships in our education, Spanish, outreach and social media departments. The deadline to apply is today. You can go to democracynow.org for more information. Again, the deadline is today. These are paid internships here in New York City. 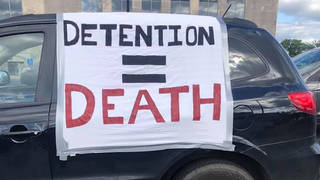