Fossil-Free Costa Rica: How One Country Is Pursuing Decarbonization Despite Global Inaction

As world leaders struggle to agree on a plan to curb global emissions at the U.N. climate talks in Katowice, Poland, we look at Costa Rica’s plan to go fossil-free beginning next year. It will be the first country in the world to decarbonize its economy. Costa Rica generates more than 90 percent of its electricity using renewable energy. Costa Rican officials have announced they want to host U.N. climate talks in 2019, since Brazil rescinded its offer to host the summit following the election of right-wing climate change denier President-elect Jair Bolsonaro. We speak with Mónica Araya, a Costa Rican climate activist who works with the president of Costa Rica on sustainability issues. She is the director of Costa Rica Limpia, an NGO that promotes carbon neutrality and clean energy.

AMY GOODMAN: We’re broadcasting from the U.N. climate summit in Katowice, Poland. We end today’s show looking at a small country taking a huge stand against climate change despite inaction of the world leaders. Costa Rica has a plan to go fossil-free beginning next year, becoming the first decarbonized economy in the world. Costa Rica already generates more than 90 percent of its electricity using renewable energy. In 2017, it went 300 days on clean energy alone.

Costa Rica is here at the U.N. climate talks in Katowice, and the Costa Rican officials have announced they want to host U.N. climate talks in 2019, since Brazil rescinded its offer to host the annual summit following the election of the right-wing former Army captain Jair Bolsonaro, also a climate change denier like the president of the United States, President Trump. Announcing the plan, Costa Rica’s minister of environment and energy, Carlos Manuel Rodríguez, said, quote, “The benefits of hosting this event are many for the country, such as the possibility of positioning our Decarbonization Plan and our route towards this goal. We could also push more ambitious projects in the area of Climate Change and Decarbonization of the world economies.”

Well, for more, we’re joined by Mónica Araya, a Costa Rican climate activist who works with the president of Costa Rica on sustainability issues. She is the director of Costa Rica Limpia, an NGO promoting carbon neutrality and clean energy. Araya’s recent piece for Project Syndicate is headlined “The Latest Climate Science Must Mobilize Us, Not Paralyze Us.”

Mónica, welcome to Democracy Now! It’s great to have you with us. Fossil-free Costa Rica? Explain what it means to go 300 days—doing what?

MÓNICA ARAYA: Fossil-free Costa Rica is already happening, because what we say to all our Costa Ricans is that while the world is debating how to become more renewable—you know, 30 percent by 2030—we are already there. So, the first point is that, for us, this is something that is happening when we dry our hair, when we make coffee. That electricity is already fossil-free. So, one thing we keep emphasizing in our national debate is that decarbonization, as such, is not a new idea for us, because it’s already there. The other thing is that around the—

AMY GOODMAN: But tell me: How did you do 300 days—of what? What does this exactly mean?

MÓNICA ARAYA: OK. What it means is that when you turn on the light, that electricity becomes either from water, wind or our volcanoes, increasingly solar. So, one of the things that we noticed is that it was normal for us to be renewable. And it was in the context of the climate discussions that we realized we were quite special. So, there is one point.

The other point is that in places like Brazil or Indonesia, the problem with decarbonization is about deforestation. And we reversed deforestation in the '90s, which means that the other big headache that the world has, we already solved. So, the next headache is the one we're trying to solve now—and I can tell you more—because the next frontier for us is for a citizen in my country to wake up in the morning, turn on the light, know that it’s renewable, but then realize that the car or the bus this person will take is also using electricity instead of oil. So, at the end of the day, being fossil-free, for us, means breaking free from fossil fuels.

And if that sounds a bit idealistic, I want to tell you what happened a few days ago. The president of our country, who is 38, the youngest president in our continent, he got into a car with the CEO of the public utility, a woman. The woman who runs this electricity company is driving a car with the president and the wife. And they are singing, and they are celebrating the fact that that car is going from A to B without using any fossil fuels. So, my point is that, in terms of hearts and minds, what is going on right now is that we are celebrating this as something that is not about the climate necessarily, because at the end of the day our emissions are not the problem, but it’s more about the next big idea for a small country that is going to turn 200 years old. So, we’re mixing the narrative of fossil-free with the story of a country that, by the time it turns 200 years old, wants to become a lab for the world, so that other countries can learn from us.

AMY GOODMAN: So, you want to host next year’s COP, the COP25.

AMY GOODMAN: Because, well, the far-right candidate in Brazil has just won the presidency.

AMY GOODMAN: And one of his first acts is saying he’s going to—that they disinvited the COP from Brazil. We heard that it might be in New York next year. Is that true?

MÓNICA ARAYA: What will happen in New York next year—it’s going to be a very busy city for climate negotiations, or at least climate discussions—is that there will be a big summit that the secretary-general is going to host to kind of [inaudible] politics, you know, polarizing, denying climate change, working against women. So, New York will be an important moment around September. And then the idea is to end, in December, with an uplifting COP, contrary to this one here, where, you know, we know—you just cannot get very inspired when you know there is so much coal, when you get out and your breathing is affecting, when you—is affected, when you realize that the president is defending coal. So, this process needs to be energized by a country that can shake things up.

AMY GOODMAN: Have windmills been outlawed here in Poland?

MÓNICA ARAYA: I don’t think—well, I don’t know enough about Poland, so I should not comment on that. But I do know that the president did defend fossil fuels, which, to us, is almost like going to a podium and saying you are against the female vote, you know? It’s the equivalent of that.

AMY GOODMAN: Speaking of women, what role—the importance of women—

AMY GOODMAN: —when it comes to a decarbonized economy, a sustainable way of living? I mean, in Costa Rica, one of the leading officials is Christiana Figueres, who is the Costa Rican diplomat who was executive secretary of the U.N. Framework Convention on Climate Change. Talk about the significance of this, but women overall.

MÓNICA ARAYA: So, clearly, when you have somebody like Christiana being so prominent, that is already very inspiring. And that has been, obviously, very visible for the new generation, but I can also give you examples of things that are happening right now. We are the first country in Latin America to have a law that incentivizes zero-emissions electric mobility—buses, trains, cars, e-bikes. The woman or the person who we work with in Congress is a woman who had to push for an idea that at the time, two years ago, was a little too far out, and we worked together, Marcela Guerrero and us. And I can tell you that when you get into transportation conversations, when you have to deal with car dealerships and with the car ecosystem, having a congresswoman and an activist promoting this idea that we had to go fossil-free in the transportation sector was unusual, because the car industry is pretty male-dominated.

AMY GOODMAN: You think electric cars and conventional cars may cost the same by 2022?

AMY GOODMAN: Costa Rica is exceptional in many ways. Among them, the country abolished the army?

MÓNICA ARAYA: Yes. I was going to say that. If you were a child in my country, that is the story, right? And I do think storytelling is very important. So, you grow up listening to the story of a country that did not have the army. And that’s why, now that we are going to become 200 years old, that abolition that framed our national stories is very important for the next abolition, which is the abolition of fossil fuels. In fact, the president said that in May, when he was inaugurated. The other thing is that we already have a moratorium on oil drilling. And because of this leadership—actually, it’s another woman in Congress, very young woman called Paola Vega. She is proposing two laws to complement the decarbonization plan that we have drafted. So, by the way, the decarbonization plan is going to be out the 24th of February, if you want to—if you want to hear about it, because it’s linked to that idea that you mentioned of the abolition of the army.

AMY GOODMAN: —who gave a speech at the plenary last night.

AMY GOODMAN: But before we go to—

AMY GOODMAN: —Thunberg, I wanted to ask you about Costa Rica’s new vice president, Epsy Campbell Barr, first woman of African descent to be elected vice president, not just in Costa Rica but anywhere in North or South America.

MÓNICA ARAYA: Yes, very proud of that. And she is super important in this story, because, at the end of the day, we cannot talk about going fossil-free in the abstract. This is not about just an emissions story.

MÓNICA ARAYA: It’s about building a much better society. And this is an example of a more diverse society that we want to build.

AMY GOODMAN: I want to thank you very much, Mónica Araya, who is a Costa Rican climate activist.

You Are Stealing Our Future: Greta Thunberg, 15, Condemns the World’s Inaction on Climate Change 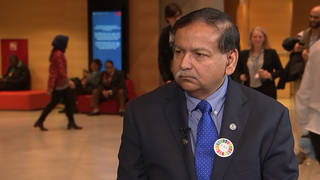