At the U.N. Climate talks in Katowice, Poland, we speak with climate scientist Saleemul Huq, who is advising the bloc of least developed countries in the climate negotiations, about their demands. He is director of the International Centre for Climate Change and Development in Bangladesh.

AMY GOODMAN: This is Democracy Now! We end today’s coverage of the U.N. climate talks here in Katowice, Poland, with Saleemul Huq, a climate scientist, director of the International Centre for Climate Change and Development in Bangladesh, advising the bloc of least developed countries in the climate negotiations.

What is your progress report as we come to the end of these climate talks? Are they succeeding? Are they failing?

SALEEMUL HUQ: Well, they’re succeeding at a very low level of getting all the technical stuff done, but it’s not succeeding at all at the political level in terms of the emergency that we have of climate change with 12 years remaining. The COP decisions that we see on paper at the moment are nowhere near enough to be ambitious to tackle the problem at the scale that it needs to be tackled.

AMY GOODMAN: And what does it mean that, well, the historically greatest greenhouse gas emitter, the United States, the president has not come, and the president, in fact, is a climate denier? What does that mean? How does it affect this summit?

SALEEMUL HUQ: I think the effect of President Trump and his delegation here—I’m not going to count the United States there; it’s just him and his coterie of people—have joined forces with Saudi Arabia and with Russia to, in fact, try and undo the Paris Agreement that we had agreed a few years ago. And they have chosen a very trivial thing to talk about, which is whether we note or welcome the IPCC special report on 1.5. But it is a significant thing, because they’re trying to undo the science and challenge the science and not believe in the science. And that’s not acceptable. A hundred and ninety-three countries want to welcome the report, and only the four countries are saying that they don’t want to welcome it.

AMY GOODMAN: And they succeeded. They got the language changed from welcoming that report to noting the report. What does that mean? Is it just semantics?

SALEEMUL HUQ: It is semantics, in a sense, but it’s much more than semantics. It means that they are trying to undo what we have collectively done in Paris, the Paris Agreement. And we will not accept that, speaking now on behalf of the most vulnerable countries. It is something we cannot take on board.

AMY GOODMAN: And yet, the U.S. is pulling out of the accord. So why do people listen to them?

SALEEMUL HUQ: Well, that’s the conundrum. I mean, if Mr. Trump wants to withdraw, why did he send a delegation here at all? We don’t understand that. I think the logic is, the delegation isn’t here to withdraw the U.S.; the delegation is to try and scupper the rest of the countries going ahead. And that’s what they’ve done, together with Saudi Arabia, Russia and Kuwait.

AMY GOODMAN: So, what are you seeing as the critical issues, in this last minute?

SALEEMUL HUQ: Well, from the vulnerable countries’ perspective, and also the vulnerable communities, with whom I do a lot of work, the most important thing is to recognize the fact that we now have loss and damage because of climate change. This is an issue that we’ve talked about for some time, but it’s a reality in 2018, including the wildfires in California and the hurricanes on the East Coast in the United States. Those caused significant amount of loss and damage. That is now attributable to the fact that we have increased the temperature of the globe already by a degree. And another one-and-a-half or even a 2-degree rise is going to be catastrophic for the rest of the world. So we need loss and damage to be recognized, and particularly to be compensated for.

AMY GOODMAN: Finally, will you be joining Extinction Rebellion?

SALEEMUL HUQ: I am a member of Extinction Rebellion. Here’s my card.

AMY GOODMAN: Saleemul Huq, thank you very much for being with us, climate scientist, director of the International Centre for Climate Change and Development in Bangladesh. 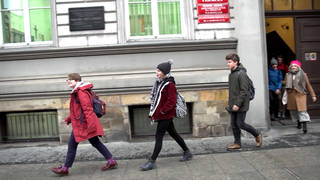