Fifteen-year-old Swedish climate activist Greta Thunberg has called for a global climate strike today to protest inaction at the U.N. climate summit. Greta made international headlines after she refused to go to school in August and began a School Strike for Climate. Greta made the call for today’s strike in a video posted on Twitter.

StoryDec 13, 2018You Are Stealing Our Future: Greta Thunberg, 15, Condemns the World’s Inaction on Climate Change

Fifteen-year-old Swedish climate activist Greta Thunberg has called for a global climate strike today to protest inaction at the U.N. climate summit. Greta made international headlines after she refused to go to school in August and September and began a school strike for climate. Greta made the call for today’s strike in a video posted on Twitter.

GRETA THUNBERG: Hello. My name is Greta Thunberg. I am 15 years old, and I come from Sweden. And I am here at the United Nations climate change talks in Poland. We are on week two of negotiations here. And as of now, there are no signs of commitments to climate action. Our emissions are still increasing, at the same time as the science has clearly told us that we need to act now to keep the planet within 1.5 degrees of warming.

Whoever you are, wherever you are, we need you now. This Friday, the 14th of December, I am calling for an international climate strike. Please strike with us. Stand outside your parliament or local government office, even for just a short while, to let them know that we demand climate action.

AMY GOODMAN: The words of 15-year-old Swedish climate activist Greta Thunberg, who just left the U.N. climate summit last night, her dad driving their electric car through the night so she could sit in front of the Swedish parliament once again, where she goes every Friday in a school strike against climate change.

Here in Katowice, Poland, at least 30 local high school students answered Greta’s call, walking out of classes today and carrying their message here to the COP. The group sang and chanted while sitting on the steps of the main conference hall, holding signs that said “12 years left” and “#ClimateStrike.” This is student Gosia Chehowska speaking with Democracy Now!’s Carla Wills.

MALGORZATA CZACHOWSKA: My name is Gosia. And I live next to Katowice, and I go to school in Katowice. And I wasn’t there today because I went to climate protest. And I want to support Greta with her idea, and I want to—politicians to make a good choice for all of us.

CARLA WILLS: And so, you said you were inspired by Greta Thunberg, who spoke here at COP. Can you talk about her message and why it resonated with you?

MALGORZATA CZACHOWSKA: Well, I think that what she did was really brave and amazing, because not many young people have the feeling that they can do something. And I think that one person can do a lot. And she is a great example of this.

MALGORZATA CZACHOWSKA: We have letters that say “12 years left.” And it’s because of the Paris Agreement and about scientists that counted that in—if we don’t do nothing ’til 2030, we are really in danger, and, well, it may end really badly for all of us, for humanity and for entire world.

CARLA WILLS: And tell me what song you’re singing today.

MALGORZATA CZACHOWSKA: We are singing song “Earth Song” by Michael Jackson. And we are singing it a cappella. And this song is really beautiful, and it’s perfect for today’s occasion.

CARLA WILLS: And what is your message to the negotiators here at COP?

MALGORZATA CZACHOWSKA: They know the facts. And maybe they sometimes don’t want to admit it, but they know everything what they need to know. They know the solutions. They know that we need to change, because, otherwise, the world will change in a way we don’t want to know. So, my message is to not ignore anymore all the threats and to do something, and not just for money, not just for economics, but for us, for all the people, for the animals and plants and for our world.

AMY GOODMAN: Special thanks to John Hamilton, Carla Wills and Hany Massoud. And an update on 15-year-old climate activist Greta Thunberg: She returned to Sweden last night. They were driving an electric car. She was with her father. Said she’d try to get Malmö; she wouldn’t make it to Stockholm. She just posted a photo on Twitter of herself participating in the climate strike. 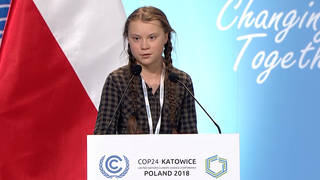 You Are Stealing Our Future: Greta Thunberg, 15, Condemns the World’s Inaction on Climate Change