Cambodians are being deported from the U.S. at record numbers, including many who have been living in the U.S. for decades after fleeing war, U.S. bombings and genocide under the Khmer Rouge. On Monday, an Omni Air flight departed from El Paso, Texas, with 36 Cambodians on board. They were deported to the Cambodian capital Phnom Penh. Attorneys believe it to be one of the largest deportation flights to Cambodia yet under the Trump administration. We speak with Kevin Lo, staff attorney in the Immigrant Rights Program at Asian Americans Advancing Justice–Asian Law Caucus. He has been working with Cambodians living in the U.S. who are facing deportation.

StoryMar 22, 2021“We Are Here Because You Are There”: Viet Thanh Nguyen on How U.S. Foreign Policy Creates Refugees

JUAN GONZÁLEZ: We end today’s show looking at the sharp rise in deportations of Cambodian immigrants from the United States, including many who have been living in the U.S. for decades after fleeing war, U.S. bombings and genocide under the Khmer Rouge. On Monday, an Omni Air flight departed from El Paso, Texas, with 36 Cambodians on board. They were deported to the Cambodian capital Phnom Penh. Attorneys believe it to be one of the largest deportation flights to Cambodia yet under the Trump administration.

AMY GOODMAN: Deportations of Cambodian immigrants are at an all-time high, with nearly 150 deportations this year, compared to 29 in 2017. These numbers are on pace to continue rising, with reported plans to remove 200 Cambodians with deportation orders each year. One man, 41-year-old Sear Un from California, was scheduled to be on Monday’s flight, but his deportation order was stayed Friday, and he remains in the country for now.

Joining us from Berkeley, California, is Sear Un’s lawyer, Kevin Lo, staff attorney in the Immigrant Rights Program at Asian Americans Advancing Justice–Asian Law Caucus. He has been working with Cambodians living in the U.S. who are facing deportation.

Lay out the issue for us, Kevin.

KEVIN LO: Yeah, sure. It’s like you mentioned. These people have been in the United States for many decades. They mostly came here in the ’80s after the refugee crisis in the ’70s. They were all resettled by the U.S. And at that time, U.S. resettlement of refugees was terrible. Cambodians and other Southeast Asians were essentially abandoned in neighborhoods across the U.S. They were ignored. They were under-resourced. They were left to fend for themselves.

And as a result of terrifying childhoods growing up in these areas—for example, one client even mentioned to me that when he was young, his dad would put him and his two sisters in the bathtub. He would tell them that it was just a game that they would play. But it was really to avoid all the drive-by shootings that would happen in the night. So, after childhoods in these neighborhoods, a lot of people basically were arrested in the streets, like tagged as gang members unfairly. And then, after serving their sentences, ICE would try to deport them.

JUAN GONZÁLEZ: So, now, many of these folks came here as children. So, essentially, this is the only country that they have known, similar to the DREAMers, the Latin American—many of the Latin American youth that are here. They don’t really know the country they’re being deported to, right?

KEVIN LO: That’s right, yeah. Almost all the clients I’ve spoken to—and at this point we’ve spoken to hundreds of the Cambodians who are here in the U.S.—when you talk to them, the majority of them, if they were born in Cambodia, they were born in Battambang province, which is the province in Cambodia that borders Thailand. And when you think about it, it’s kind of a frightening thing that everyone is from there, because it’s the fact that they were right by Thailand that they were able to escape to safety to Thai refugee camps along the border. When you talk to the other half of the people, you find out that they were actually born in the refugee camps themselves. Some of my clients have been in—had been in the refugee camps for so long that they have siblings that were born in each of the camps that they passed through. And then they were later accepted to the U.S., like I said, in the mid-’80s.

AMY GOODMAN: Kevin Lo, tell us about your client. Tell us about Sear Un and what happened to him.

KEVIN LO: Yeah. So, Sear Un was born in Battambang province. He and his family fled Cambodia on the back of a truck. He has this terrifying story where he says he was crying so much that his parents were in this impossible situation of possibly leaving him behind in the jungle, because his crying would alert the Khmer Rouge guards that were guarding the border. Luckily, someone had a little bit of rice. They passed it to him. He ate it, and he stopped crying long enough for them to get across the border. They then spent enough years in a Thai refugee camp and then a Filipino refugee camp, such that he has a brother born in each of the camps. They were accepted to the U.S. in 1984, and he grew up in California, essentially. That was his home. And he continues to live in National City, near San Diego, in California.

In his youth, he had only one conviction. It was when he was 19. He was driving around aimlessly with friends when two of them suggested that—out of boredom, that they would rob a house. Sear Un parked the car. His friends broke into the home, stole a TV, stole a few other items. And then, for his trouble, for being essentially the getaway driver, Sear was given $100 as a share of the spoils and $25 in gas money. He was sentenced to serve one year in county jail for residential burglary. He opted to take a felony charge, because he wanted his friend, who already had a strike, to avoid a second one.

JUAN GONZÁLEZ: And, Kevin, could you talk about the changes, from administration to administration, in how the Cambodians slated for deportation have been handled, whether it was under George Bush, President Obama and now Trump, especially this whole issue of getting agreement with the receiver nations to accept them?

KEVIN LO: Sure. I’ll start with the repatriation agreements. So, in order to deport someone out of the U.S., you can’t just unilaterally decide to do so. You have to get the receiving country to accept them. And the way countries do this is through repatriation agreements, which are essentially memorandums of understanding, where the countries agree: This is how we will process the people; these are the criteria. And for Cambodia and the United States, they signed their agreement in 2002. So, prior to that, Cambodians like Sear who were ordered removed could actually not be sent to Cambodia. They were instead released on orders of supervision and allowed to live their lives here. So, Sear and many other Cambodian Americans who are here in the United States have been out for decades. They have faithfully checked in with ICE every year or maybe every six months.

And in terms of the escalation of their deportations, it has been pretty drastic. Under Obama, they were already deporting—I guess, to give a sense of the figures, under Obama, every year they were deported between 12 to 20 Cambodians. And at that rate, people were able to find time and—basically, with 12 to 20 people, nonprofits and advocates around the country were able to speak with and assist the people. As soon as Donald Trump came to power, the Trump administration issued visa sanctions against Cambodia. We initially thought that this would not affect things that much. But within a month, so by October of 2017, ICE had picked up around a hundred Cambodians and were basically preparing them for deportation. And that’s kind of the cycle we’re currently in. So, since October 2017, we’ve seen ICE raids every four months, and they pick up between 50 and a hundred people from all across the country.

AMY GOODMAN: Finally, Sear Un—it sounds dramatic—right through to Monday, when dozens of Cambodians were deported, how did you end up preventing him from getting on that plane?

KEVIN LO: Right. So, we had initially met Sear in September, when he was picked up. Actually, like, we would prefer these situations to not be so dramatic, but because of how ICE works and how the immigration courts work, we only managed to get an emergency stay for him granted on Friday. And this was after I had filed the stay maybe a month and a half before the flight. We knew everything about the flight, like when it would leave, when it would land. And on a daily basis, I would call the Board of Immigration Appeals, where we were trying to reopen Sear Un’s order, and I would leave them a voicemail on a daily basis. In the last week before he was scheduled to leave his family and his only home behind, I called the Board of Immigration Appeals on an hourly basis. I’m not a pushy person, but I would call them on the hour just to remind them that this father of two, and soon to be three, was about to be sent away. We actually even had to file a federal lawsuit in the Southern District of California in order to get ICE to try to force the BIA to act on a decision.

It ended up being a very dramatic moment, because they had already transferred my client out of the San Diego ICE facility to Arizona. We wanted them to stop the flight from Arizona to Texas, but he boarded the flight. And then, midway on the flight, the ICE officers received an email. They took Sear aside. They told him, “We’re not sure what exactly happened, but you’re not going to get off in Texas.” So, Sear was in a weird situation where he watched around 30-something of his countrymen essentially get off the plane in tears, ready for deportation, and he had no idea what was in store for him until I caught up with him.

AMY GOODMAN: We just have five seconds. Where is he now?

KEVIN LO: Sear is currently in Arizona, and we’re hoping he will be released today. It’s also his daughter’s fourth birthday today.

AMY GOODMAN: Kevin Lo, we want to thank you for being with us, with the Immigrant Rights Program at Asian Americans Advancing Justice.

That does it for our show. Democracy Now! has a social media job opening. Go to democracynow.org. 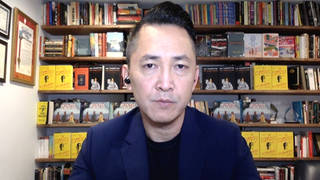