The U.S. Supreme Court is set to hear arguments today in a key case that could deal a massive blow to unions nationwide. The case, Janus v. American Federation of State, County and Municipal Employees, deals with whether workers who are covered by union-negotiated contracts are required to pay a portion of union dues even if they are not members of the union. This case is among a slew of conservative causes that right-wing donors have poured money into in recent years—among them, the Koch brothers, who recently boasted they’ve won a “laundry list” of victories from the Trump administration. For more, we speak with Lee Fang, investigative reporter for The Intercept. His recent piece is entitled “Koch Document Reveals a Laundry List of Policy Victories Extracted from the Trump Administration.”

JUAN GONZÁLEZ: And, Lee, speaking of marketing efforts, I wanted to ask you about another big marketing effort. The Koch brothers art talking about spending somewhere between $400 and $500 million on the upcoming midterm elections. Could you talk about their network, the Seminar Network, that you’ve looked into, and what the impact of such huge spending could be on these upcoming elections?

LEE FANG: Well, look, the Koch brothers, for over a decade now, have organized other Republican donors—these are billionaires, very wealthy donors—to attend secret gatherings with the Koch brothers to pledge money to the Koch network. And this Koch network money goes to a range of groups, different think tanks, university efforts, but also the campaign advertisements and grassroots efforts to get out the vote. The Seminar Network is an effort to institutionalize this fundraising network. They meet twice a year. There was a recent meeting at Indian Wells, where about 500 different donors came to listen to the Koch brothers and update them about their strategy.

And, you know, the big priority for the Koch brothers this year, in this midterm election, is to preserve the Republican majorities in Congress and to continue to elect Republicans on the state level. And there’s kind of two big efforts that are going on right now. They’re very worried about the upcoming census, that will redraw the political maps in every single state just in two years. So, whoever controls the legislatures after this midterm elections will draw the maps over the next decade. They’re also concerned that Republicans will lose control of the Senate. So they’re going on offense for a lot of Democratic senators who are incumbents right now. We already see TV ads all across the country, places like Indiana and Missouri, where there are vulnerable Democratic senators, you know, in states where Trump won the election. They’re already on air. They’re hiring staffers to go out and organize efforts, you know, using groups like Americans for Prosperity. But they’re playing offense, hoping to pick up some Democratic seats while protecting the Republican majority.

AMY GOODMAN: I want to turn to Charles Koch, CEO of Koch Industries, making his opening remarks at the Seminar Network last month in Palm Springs.

CHARLES KOCH: We’ve made more progress in the last five years than I had in the previous 50. … Central to our accelerated progress is that we have followed, and increasingly followed, the philosophy that made Frederick Douglass such an effective social change entrepreneur. And that is, as he put it, to unite with anybody to do right and no one to do wrong.

AMY GOODMAN: So, if you can talk about the overall agenda and also Capitol Hill lobbyists—they’re not only funding think tanks, but also polling organizations—and your recent piece about the Koch brothers targeting Claire McCaskill in Missouri for opposing Republican tax cuts?

LEE FANG: Right. You know, in the backdrop of a very chaotic first year, Donald Trump has actually helped achieve much of what the Koch brothers have lobbied for for a very long time, in really rapid succession. You know, in three primary areas that we talk about in the piece, the Republicans in Congress and Trump enacted tax cuts that the Koch brothers have fought very hard for. And these are tax cuts weighted to the top. There was a recent estimate that said that each Koch brother, David and Charles Koch, will receive $500 million per year—that’s an estimate—just from the tax bill alone.

There’s also the regulatory state. The Trump administration, with many appointees coming directly from the Koch network, have handed out a number of rulings and changes to regulations that are beneficial to the Koch brothers, primarily in the area of environmental rules.

And in the judiciary, the Koch brothers have pushed very hard for long, systemic change, and Donald Trump is on pace to break records with a number of federal appointments to the judiciary. He’s appointing judges to the district and appellate level at an unprecedented rate. And these are lifetime appointments. These are judges that will be there for another 10, 20, 30, maybe even 40 years, so that maybe if there is a progressive or Democratic president and Congress after Trump leaves office, these judges will be there to potentially invalidate any rules that come out of or any laws that come out of a more progressive administration.

LEE FANG: And Claire McCaskill is a senator who voted against the tax cuts, so that upset the Koch brothers. But she’s, you know, a very vulnerable Democratic senator. She’s in a state that Trump won big, in Missouri. And so that’s going to be a very aggressive Senate campaign. That’s part of the kind of basket of Democratic seats that the Koch brothers hope to pick up for Republicans. So, you know, even if Republicans suffer elsewhere, in terms of the congressional elections, they’re hoping to play offense and pick up that seat.

JUAN GONZÁLEZ: Well, Lee, speaking about the Koch brothers, the U.S. Supreme Court is set to hear arguments today in a key case that could deal a massive blow to unions nationwide. The case is called Janus v. American Federation of State, County and Municipal Employees, and it deals with whether workers who are covered by union-negotiated contracts are required to pay a portion of union dues even if they are not members of the union. In 2016, after conservative Justice Antonin Scalia died suddenly, the Supreme Court deadlocked 4-4 on the case. But now it’s expected that Trump appointee Justice Neil Gorsuch will break this tie by ruling against the unions. Right-wing and conservative donors have poured money into this case and other efforts to weaken unions. The New York Times had a big piece about the conservative donor base around this case. Could you talk about the importance of the case?

LEE FANG: This Janus case could be the most devastating blow to progressive politics since the Citizens United decision. Simply put, if this case goes through—and it’s looking very likely, with Neil Gorsuch on the Supreme Court, that they will decide in favor of the plaintiffs—it will allow, as you mentioned, right-to-work rules for public sector employees nationwide. That means that even for members or nonmembers of unions, members can—unions can no longer withdraw what’s called agency fees. That’s the kind of money that’s deducted from a paycheck to represent a worker under contract. And when unions can no longer collect those fees, as we’ve seen on the private sector side, many unions kind of enter a death spiral. It becomes harder to retain members. There are opt-out campaigns. There’s decertification campaigns. Members leave the unions. And because public sector unions—teacher unions, in particular—are some of the biggest donors to progressive politics, funding progressive Democrats, especially on the state level—sometimes they’re the largest donors to progressive campaigns for office—the effects can simply be devastating.

AMY GOODMAN: Lee Fang, we want to thank you very much for being with us, investigative journalist at The Intercept, covering the intersection of money and politics. His recent article, “Even as a Student Movement Rises, Gun Manufacturers Are Targeting Young People,” we’ll link to that piece, as well as “Koch Document Reveals Laundry List of Policy Victories Extracted from the Trump Administration.”

This is Democracy Now! When we come back, it’s the six-month anniversary of Hurricane Harvey hitting Houston. We’ll talk with various people from Houston about what’s happened since then. Stay with us. 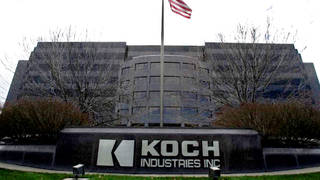