On Tuesday, President Trump announced via Twitter he was firing Secretary of State Rex Tillerson and tapping CIA Director Mike Pompeo to replace him. As a former Kansas Republican congressmember, Pompeo has a history of making Islamophobic statements. He’s also been a major ally to the billionaire right-wing Koch brothers. For more, we speak with Lee Fang, investigative reporter with The Intercept. His 2016 piece is “Trump CIA Pick Mike Pompeo Depicted War on Terror as Islamic Battle Against Christianity.”

AMY GOODMAN: This is Democracy Now! I’m Amy Goodman. On Tuesday morning, President Trump fired Secretary of State Rex Tillerson by Twitter. In the same tweet, the president announced CIA Director Mike Pompeo, who’s a close ally of the Koch brothers, will be nominated to become the new secretary of state. As we look at the shake-up in the Trump administration, I want to bring into this conversation investigative journalist Lee Fang of The Intercept.

Let’s talk, Lee, about secretary of state nominee Mike Pompeo. You have written about how he once depicted the war on terror as an Islamic battle against Christianity. Mike Pompeo, who’s the current director of the Central Intelligence Agency, a former congressman.

LEE FANG: Hi, Amy. Yes, that’s right. I think this nomination to elevate Pompeo as secretary of state signals a much more aggressive posture from Donald Trump. You know, Donald Trump campaigned for office by portraying himself as a skeptic of foreign intervention, but Pompeo represents a very different view. Pompeo has supported foreign intervention, from Yemen to Syria. In the last year, he has spoken out and described the leadership of Iran and North Korea as an existential threat to the United States, suggesting that he supports regime change.

And most critically here, I think—you know, we took a look at Pompeo’s different statements to think tanks, to churches around the country, when he served as a member of Congress. And Pompeo has described the war on terror as a battle between religions. He has depicted the fights in the Middle East and the war on terror as a conflict between Christianity and Islam, and saying that Christians need to mobilize against this Muslim threat. So he really kind of has taken extreme viewpoints. If he wants to serve as the chief diplomat for the United States, this is deeply problematic.

AMY GOODMAN: Lee, I want to go to a video clip that you’ve written about. This is Mike Pompeo addressing a church group in Wichita in 2014.

REP. MIKE POMPEO: This threat to America is from people who deeply believe that Islam is the way and the light and the only answer. And so, as we think about what U.S. policy needs to be, how we will begin to combat this, we need to recognize that these folks believe that it is religiously driven for them to wipe Christians from the face of the Earth. They may be wrong. There’s some debate about that, what the Qu’ran actually says. They may be wholly misguided. And I will tell you it is absolutely a minority within the Muslim faith. But these folks are serious, and they abhor Christians and will continue to press against us, until we make sure that we pray and stand and fight and make sure that we know that Jesus Christ as our savior is truly the only solution for our world.

AMY GOODMAN: That was Mike Pompeo when he was a congressman from Kansas in 2014. Lee Fang?

LEE FANG: Yeah, that’s right. You know, I’ve covered Mike Pompeo for some eight years now. I reported on Pompeo’s first election to Congress, in 2010, when he was running for a seat in the Wichita area. And, you know, there’s a disturbing pattern that I think we should talk a little bit about.

Pompeo, from his very first campaign, has had a history of racially tinged comments, of antagonizing the Muslim community. You know, his first Democratic opponent, Raj Goyle, an Indian American, his campaign sent out a statement describing Raj Goyle as a, quote-unquote, “turban topper.” The campaign later apologized for that statement, but then put up billboards all around the Kansas seat reminding voters to, quote, “Vote American.”

Once he got into office, Pompeo has had a long history of, again, antagonizing Muslim Americans. He called for a protest and encouraged harassment of a local mosque in Kansas, falsely accusing them of supporting terrorism. After the Boston bombing, Pompeo went out and made a statement demanding that the Muslim community condemn and apologize for that attack, even though, well before he made that statement, all the leading Muslim civil rights groups had already condemned this attack. So, you know, this is ridiculous for many reasons, not only because of that, but because he’s never demanded something similar from Christian groups after Christian terror attacks, you know, for incidents like the Charleston shooting. Dylann Roof was a proud Christian. You don’t see Pompeo demanding an apology or condemnation from the Christian community. He’s been very selective in his demands.

I believe he’s been on anti-Muslim activist Frank Gaffney’s radio show 20 times. He has a very close relationship with that individual. And ACT for America, this is one of the most influential and aggressive anti-Muslim organizations in the country. They’ve organized protests and harassment campaigns against Muslims all over the country. ACT for America, this anti-Muslim hate group, actually awarded Pompeo their highest award, recognizing his long history of antagonizing the Muslim community.

AMY GOODMAN: And, Lee Fang, his connection to the Koch brothers?

LEE FANG: Right, and I think this is very important for understanding Pompeo’s character. Pompeo has deep ties to the Koch brothers. The Wichita seat that he represented in Kansas was the headquarters of Koch Industries. Early in his career, he received an investment from the Koch brothers, when he started an aerospace company. The Koch brothers really handpicked him to run for that open seat in 2010. His only political experience was appearing at tea party events organized by the Koch brothers’ political machine, and they were his largest contributor.

Why is this important? Well, once he got to Congress, Pompeo was a loyal foot soldier for the Koch brothers’ political agenda. He constantly attacked pollution regulations, climate change regulations, and advanced attacks on renewable energy. So, you know, other than tax cuts, this is a top legislative priority for the Koch brothers. And I think that that speaks to Pompeo’s character, that he’s really been beholden to his political supporters.

And again, just looking at his relationship with Trump, he was a big Trump supporter during the presidential campaign. He’s been incredibly loyal, unwilling to really question Trump’s agenda. And so, if he’s secretary of state, he will be very different from Rex Tillerson, who was at least—who at least attempted to be even-handed in some complicated disputes. Pompeo, I think, is much more likely to be a loyal foot soldier.

AMY GOODMAN: John Kiriakou, you had a different feeling about Mike Pompeo, who President Trump just tweeted, when he informed Rex Tillerson he was fired, that Mike Pompeo would be replacing him as secretary of state.

JOHN KIRIAKOU: Not necessarily different. I think all of that is true. And I’ll tell you, where I think he’s most dangerous is on Iran, because Mike Pompeo has made it very, very clear that he intends to take a tough stand on Iran. He opposes the Iran nuclear deal, consequences be damned. And, you know, President Trump likes to surround himself with yes men on issues like that, like Iran and terrorism. Mike Pompeo is a yes man.

AMY GOODMAN: I wanted to go back to Lee Fang for one minute on a different issue, and that is this special election that we’re about to see the results of. It looks like in this district there may be a complete upset, a district, the 18th District in Pennsylvania, that Trump won by like 20 percent. The Republican candidate, who has yet to concede defeat, though he’s down hundreds of votes, but the final vote is not in—”Rick Saccone,” you write, “the GOP nominee in Pennsylvania’s 18th congressional district, is a former intelligence support consultant for the U.S. Army at the infamous Abu Ghraib prison.” Can you expand on that, Lee Fang?

LEE FANG: That’s right. Rick Saccone, you know, he describes himself as “Trump before Trump was Trump.” You know, this is someone who’s been very bombastic, you know, attacked immigrants. He has a very right-wing agenda. But he has a very interesting history, as well. You know, previously, before he served in the Pennsylvania state Legislature, he was a consultant for interrogations in Iraq, actually serving in Abu Ghraib. And he wrote an entire book defending torture. So this is a very unusual candidate, in certain respects.

But this is a huge election in terms of being a bellwether for the midterm elections. Saccone had a lot of money, a lot of super PAC support, I think over $10 million spent on his behalf, really every advantage in this district. This was a very pro-Republican district. And it looks like Conor Lamb pulled it out. So, this is, I think, a signal that Democrats will do very well in the elections this year.

AMY GOODMAN: Conor Lamb, who was a Marine Corps captain. 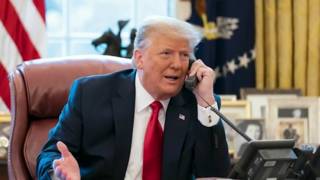