After Hurricane Harvey dumped more than 50 inches of rain on Houston six months ago, tons of moldy debris had to be removed, and the nation’s fourth-largest city is now beginning a multi-year rebuilding process. Much of the work is being done by undocumented immigrants, who make up at least half of the Texas construction workforce. But even as their work is in high demand after the storm, many are facing widespread wage theft. Few of them report the abuse, because they fear deportation if they go to police because of state’s so-called “show me your papers” law that allows police to ask anyone in their custody their immigration status. We speak with Mauricio “Chele” Iglesias, community organizer for the Workers Defense Project in Houston, and Renée Feltz, reporter for The Intercept and longtime Democracy Now! producer.

StoryMar 20, 2018Voices from Houston After Harvey: Immigrant Homeowners Say Little to No Help Coming from FEMA

JUAN GONZÁLEZ: We turn now to Houston, the nation’s fourth-largest city, where Hurricane Harvey dumped more than 50 inches of rain six months ago. After the storm, tons of moldy debris had to be removed. Now the city is beginning a multi-year rebuilding process, much of the work being done by undocumented immigrants, who make up at least half of the Texas construction workforce.

But even as their work is in high demand after the storm, many are facing widespread wage theft. Few of them report the abuse, because they fear deportation if they go to the police. Just last week, the U.S. 5th Circuit Court of Appeals upheld much of the state’s so-called “show me your papers” law that allows police to ask anyone in their custody their immigration status.

This is a Houston day laborer named Adrian, who spoke to The Intercept. He is a Mexican immigrant who says he worked 60 hour per week but only got paid for 40.

ADRIAN: [translated] They divided my check into three to avoid paying me overtime.

INTERVIEWER: [translated] Did you ask them for the overtime?

ADRIAN: [translated] No. There are lots of people who don’t say anything, because they’re afraid of stirring things up. If they hadn’t supported SB 4, things would be different, because a lot of immigrants aren’t reporting anything for this reason.

AMY GOODMAN: Undocumented immigrant workers like Adrian lost thousands of dollars due to wage theft after Hurricane Harvey. But some have fought back and won their paychecks by pressuring one of the nation’s largest disaster recovery firms, with help from labor advocates.

We welcome you both of you to Democracy Now! Renée, you’re just recently back from Houston. Describe what you found.

RENÉE FELTZ: Thanks so much, Amy and Juan.

I was curious to find out about the conditions for people who are rebuilding Houston. Fifty inches of rain fell on the city. First, a lot of the buildings had to be mucked out, as they called it, cleaned out—the mud, the debris, the mold. Then they had to be rebuilt. And that process is going to take a long time. So, I wanted to see who’s rebuilding. And it’s mostly undocumented immigrant laborers.

And what I found to be especially interesting is that their labor is in high demand. We just described the situation in Houston. We also know that there were storms in Florida, Puerto Rico, the fires in California—a lot of reconstruction to be done. And yet, these workers, who couldn’t—who—jobs were everywhere—were often not getting paid for the work that they did. And part of the reason for that, as we mentioned in the introduction, is because Texas has what they call a sort of “show me your papers” law. When people go to police, they might be afraid that police can ask them about their immigration status. So, even though it’s a crime not to pay a worker, even if they’re undocumented, these workers weren’t going to police to report it.

Now, you know, we call this “undocumented and unpaid,” but another way to say it is “undocumented and unpaid, until now.” When I went to Houston recently, I was interested to learn of some sort of good news. Two workers that I met with Chele, named Karla and Hector, were working on rebuilding an apartment complex north of Houston, and they ended up working several weeks and not seeing a paycheck. They inquired about it. They asked, you know, “When I going to get paid?” They were being paid in cash. And even Karla was injured at some point. And when she went to the hospital, she needed that cash, from what she had worked, to help pay for her bills. The company, the subcontractor, wasn’t paying her. And so, they sought help. She sought help from a lawyer, who said, “I can’t do anything for you.” Essentially, she felt like she had no rights, even though she had just worked all these weeks. And maybe Chele can pick it up from here to tell us what happened, you know, when they turned to a new foothold in Houston of the Workers Defense Project.

Well, what happened is that Hector reached out to me through social media, and he wanted to know what we can do to help him. He was not getting paid for several weeks. And at first, he talked to me. He was—he did not trust me at first. But then, when I spoke to him and we met and told him what we are, what Workers Defense Project is, he became acquainted with us, and he gained—we gained his trust. We were able to help Hector and Karla by eventually, you know, filing liens against the apartment buildings, and we were able to recover their wages.

NEXTVoices from Houston After Harvey: Immigrant Homeowners Say Little to No Help Coming from FEMA 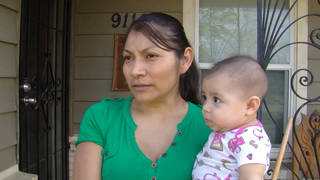