In an on-the-ground report from Houston, Democracy Now! producer Renée Feltz speaks with immigrant homeowners who faced heavy flooding during Hurricane Harvey and say they are recovering with little or no help from FEMA, even though their U.S.-born children are living with them. Many faced FEMA inspectors who did not speak Spanish.

AMY GOODMAN: I wanted to turn to a related report, Renée, that you produced for Democracy Now! about how FEMA responded to immigrants in Houston after Hurricane Harvey.

RENÉE FELTZ: Half a year after Hurricane Harvey, many homeowners who faced heavy flooding are still recovering with little or no help from FEMA, especially immigrants. To talk to some of them, I meet up with Chele, an organizer with the Workers Defense Project. chele.

MAURICIO ”CHELE” IGLESIAS: You can still see like a lot of mud, you know, on the streets.

RENÉE FELTZ: He takes me to a working-class neighborhood built near the intersection of the waterways of Greens Bayou and Halls Bayou.

MAURICIO ”CHELE” IGLESIAS: So, this is like the bayou nearby.

RENÉE FELTZ: Some of the houses still look destroyed from flooding, with visible water lines. They’re interspersed with fully restored houses and others in various states of repair. One of the first residents we meet is Alma, an immigrant from Mexico, who shows us her house, that flooded with three feet of water during the storm.

ALMA: [translated] Everything got damaged—beds, fridge, stove and the living room, everything. We threw everything away.

RENÉE FELTZ: Is the house damaged still, or is it fully repaired?

ALMA: [translated] It’s so-so, because we just fixed two bedrooms, where my 15-year-old daughter and me and my husband sleep, and the kitchen.

RENÉE FELTZ: We’re curious if people have heard from FEMA, and what that experience was like.

ALMA: [translated] Oh, yes, they helped. It took a long time, but they did help us, thank God. And the inspectors were nice to us.

RENÉE FELTZ: Alma tells us they used a gift card from her church to buy drywall and insulation, so her husband could start to repair the house before their FEMA check arrived.

Was the inspector bilingual?

ALMA: [translated] He spoke a little bit of Spanish, but not much.

RENÉE FELTZ: Down the street from Alma, we stopped to look at one of many houses that seem abandoned—at first.

MAURICIO ”CHELE” IGLESIAS: I remember this home. It was missing a part of the front wall. Now it looks like it’s covered by wood. And there’s a new door. I looked inside, and there’s no walls. There’s just two-by-fours. It looks like there are things, like someone is living there. According to FEMA, they are saying that these homes are habitable. You know, the way they look, they don’t look habitable to me or to any human being.

RENÉE FELTZ: Across the street, we meet a man named Ricardo, a Mexican immigrant, who is unloading construction material from his van into his house, which flooded with more than a foot of water during Hurricane Harvey. I ask him what was damaged.

RICARDO: [translated] Practically everything. I had to remove four feet of sheetrock from the floor.

RENÉE FELTZ: Can you tell us what happened when FEMA came?

RICARDO: [translated] Really, they never came. Really, I only spoke with them once on the phone, and they asked me for my Social Security and said there was no help for those who don’t have a Social Security.

RENÉE FELTZ: Can he describe the impact of not having FEMA help?

MAURICIO ”CHELE” IGLESIAS: He says that, for him, it feels like it will be the same, because there are other people who are much worse than him and have gotten aid, and they’re still, you know, not fully recovered, and they’re in a worse state. So, but he’s been hurt, you know, economically. Yeah, so, his savings, you know, he spent many of his savings away in recovering and doing the work himself.

RENÉE FELTZ: After we leave Ricardo, we go around the corner to meet Joselyn Ramos [phon.], an immigrant from El Salvador who moved back into her house not long after it suffered heavy flooding from Harvey. She lives there with her husband, two relatives and her children, 8-year-old son Gerardo and 3-year-old daughter Madeleine, who has special needs. Joselyn says FEMA later helped pay for a hotel room, but the family had to move back into the house before it was repaired.

JOSELYN RAMOS: [translated] We then came back to the house the way it was. My children kept getting sick a lot, because my baby girl suffers from asthma and her lungs don’t work properly. My 8-year-old son also has asthma. I had to bring them to the doctor very often. He even gave me a letter so I can take it to FEMA, because he said that our house was not livable. I spoke with FEMA, and they told me that they could not pay for the hotel because my house was indeed livable.

RENÉE FELTZ: Did the FEMA inspector come to the house?

JOSELYN RAMOS: [translated] Yes, he did come to inspect, but he took only from five to 10 minutes. He was only here a few minutes. He was American and did not speak Spanish. So he came and only checked the front of the house. He didn’t go to the bedrooms or the bathrooms. He didn’t go anywhere.

RENÉE FELTZ: When Joselyn shows us the progress she and her husband have made so far, each room in her house looks about half ready to live in. Many windows are still being installed, including in the bedroom her children share. I asked her if she plans to keep living here, and she answers:

JOSELYN RAMOS: [translated] Yes, of course. I need to keep working to make money and keep going, because we came here from our countries, that are not as good as here, to find a better future here. It is difficult, but not impossible.

AMY GOODMAN: And, Renée, finally, we have just 20 seconds, but FEMA’s response to these immigrant homeowners, a number of them with U.S.-born children?

RENÉE FELTZ: Well, these U.S.-born children are living in horrible conditions in some of the homes. It still smelled like mold when I went there. The mold is going away, but in many cases there’s no windows installed in their bedroom yet. These are—I want to just distinguish, compared to other post-storm situations, these are longtime residents. Some of them have lived five, 10, 20 years in Houston. They have U.S. citizens. So, it’s something that FEMA needs to address.

AMY GOODMAN: Well, we want to thank you for that excellent report. Renée Feltz, Democracy Now! producer and reporter. And thanks to Chele Iglesias. 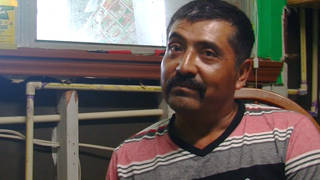