The Israeli military’s massacre of Palestinians Monday has sparked widespread international condemnation. South Africa has recalled its ambassador to Israel. Turkey has recalled both its ambassadors to Israel and the United States and has declared three days of mourning starting on Friday. Palestinian leaders have accused the Israeli military of committing war crimes, but the United States has blocked a U.N. Security Council statement calling for an independent investigation into the killings. Meanwhile, Israeli officials have tried to claim Hamas is behind the protests in efforts to justify the killings. For more, we speak with Tareq Baconi, author of the book “Hamas Contained: The Rise and Pacification of Palestinian Resistance.” He is a policy member at Al-Shabaka: The Palestinian Policy Network and a policy fellow at the European Council on Foreign Relations.

AMY GOODMAN: This is Democracy Now!, democracynow.org. Our guest is Tareq Baconi, author of the book Hamas Contained: The Rise and Pacification of Palestinian Resistance.

JUAN GONZÁLEZ: Tareq, I wanted to ask you, in the few minutes we’ve got left, in terms of what could potentially—who might be able to hold Israel responsible for this latest carnage that’s been occurring now for weeks, really? And what, under international law, might be possible in terms of the international community demanding accountability?

TAREQ BACONI: I think it’s really important in the context of everything we’ve seen today, from Sharif and Muhammad and others, to stress that the Gaza Strip isn’t a separate border or entity that’s bordering Israel. Gaza is under occupation. It continues to be under Israel’s military control. Israel controls the population registry. It controls all entry and exit of goods, of people. It even controls the number of calories that go into the Gaza Strip to avoid mass starvation. So, what that means is that this idea of infiltration is just misrepresenting reality on the ground. These people aren’t infiltrating. They are people under occupation. And Israel has the responsibility, under international law, to protect civilians under its occupation. Instead of that, we see Israel presenting Gazans as people who are looking to swarm into Israel and break this border, which is patently false.

AMY GOODMAN: And, Tareq, as we wrap up this show, the final figures—we’ve been talking about 61 people killed in one day, the deadliest day of the Palestinian protests, Israeli military killing them, gassing them yesterday in Gaza. But the total figure since just March 30th, the six weeks of protest?

TAREQ BACONI: Yes. So, over the past six weeks, we’ve had around 110—109 are the latest numbers—of people who have been killed. Those are—the vast majority of them are unarmed civilians. And more than 12,000 injured. Yesterday was worse than the combined six weeks leading up to yesterday. And this is the biggest killing since 2014, when Israel launched its largest military assault on the Gaza Strip to date, killing 2,500 people.

AMY GOODMAN: Tareq Baconi, we want to thank you for being with us. His book, Hamas Contained: The Rise and Pacification of Palestinian Resistance.

And that does it for our show. Special thanks to Democracy Now! correspondent Sharif Abdel Kouddous in the field in Gaza. 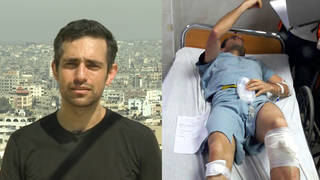