As details surface about the school shooting in Santa Fe, Texas, Friday that left 10 dead, a familiar pattern has emerged: The shooter was a white male who had been rejected by a female classmate. The mother of Shana Fisher, one of the victims in the art classroom where police say 17-year-old Dimitrios Pagourtzis entered and opened fire, told the Los Angeles Times that her 16-year-old daughter “had 4 months of problems from this boy. … He kept making advances on her and she repeatedly told him no.” Sadie Rodriguez said her daughter recently stood up to Pagourtzis in class, and “a week later he opens fire on everyone he didn’t like.” The Santa Fe shooting echoes another that followed rejection: In March, 16-year-old Jaelynn Willey was shot in the head at Great Mills High School by 17-year-old Austin Wyatt Rollins after she had ended their relationship. Her injuries left her brain dead. She later died after she was taken off life support by her family. We are joined by Soraya Chemaly, a journalist who covers the intersection of gender and politics. She is the director of the Women’s Media Center Speech Project.

StoryNov 07, 2017How Domestic Violence and Militarism “Open the Floodgates” to Mass Shootings Like the Texas Massacre

AMY GOODMAN: I wanted also to go to the issue of the motive for the killing. No official motive has been announced for the massacre, but a familiar pattern has emerged: the shooter a white male who had been rejected by a female classmate. The mother of Shana Fisher, one of the victims in the art classroom where police say Dimitrios Pagourtzis entered and opened fire, told the Los Angeles Times that her 16-year-old daughter had four months of problems with this boy. “He kept making advances on her and she repeatedly told him no,” unquote. Sadie Rodriguez said her daughter recently stood up to him in class, and, quote, “a week later he opens fire on everyone he didn’t like,” she said. Rodriguez also spoke to Houston station ABC13.

SADIE RODRIGUEZ: How do you deny when someone says, no, they don’t want to be with you? He had to have been mentally unstable. You know, nobody was paying attention to him. He’s going to school wearing upside-down crosses, you know, and trench coats.

AMY GOODMAN: While investigations into the attack are ongoing, the Santa Fe shooting could be the second school shooting in recent months driven by such rejection. In March, 16-year-old Jaelynn Willey was shot in the head at Great Mills High School in a hallway just before classes began by 17-year-old Austin Wyatt Rollins after she ended their relationship. That was in Maryland. Her injuries left her brain-dead, and she later died after she was taken off life support by her family.

I want to bring into this conversation Soraya Chemaly, a journalist who covers the intersection of gender and politics, director of the Women’s Media Center Speech Project.

Soraya, one more time, though this hasn’t been confirmed, the mom of one of the shooting victims says that this shooter, now in custody, went after her daughter for months trying to make her his girlfriend.

SORAYA CHEMALY: Yes. She described his persistence, and, I think, really focuses us on this question of boys and men who cannot take no for an answer. And so, we see, for example, headlines—I think it was yesterday, Reuters had a headline that said “spurred advances provoked this attack.” And headlines like that are particularly unhelpful, because it actually sort of reverses the trajectory of the harm and leads to conversations about shooters like this really being bullied and defending themselves.

So we see in a lot of these cases of shooting two primary metaphors to describe what’s happening. One is a metaphor of war and sort of self-defense. And the other is of disease and pathology. I would argue that both, actually, hide and mask some of the core issues that we won’t talk about: misogynistic extremism and terrorism. And these school shootings often, as you say, include an aggrieved sexual entitlement on the part of the shooter. And so many of these mass shootings, well over 50 percent, close to 60 percent, begin with a history or an incident of intimate partner or known acquaintance violence.

AMY GOODMAN: And we just heard Ed Scruggs referring to the case in Ponder, Texas—

AMY GOODMAN: —where a man walked into a Texas home and shot his three children, his ex-wife and her boyfriend, before turning the gun on himself. The only survivor, the man’s ex-wife, the grieving mother, “took to Facebook Live … from her hospital bed in a series of heart-wrenching videos to express her devastation at the loss of her family,” reading from the—from USA Today. So, this has just taken place in Texas, then followed by the Santa Fe shooting. You write, Soraya, about this intersection of “incel” groups, men’s rights activists, white supremacists and neo-Nazi sites that have been cross-pollinating ideas and using gaming to talk to boys. Explain.

SORAYA CHEMALY: So, they’re, all of these, communities that thrive online. They organize and grow on many different platforms, whether it’s 8chan or 4chan or Reddit. Their ideas sort of get laundered up the media food chain until they’re more palatable to mainstream audiences. But the core of so many of these ideologies, whether you’re talking about what are known as “incels,” which are involuntary celibates, or, you know, racist, neo-Nazi white supremacist groups, one of the fundamental, ordinal forms of dividing people and controlling people is gender. It is the first order of dividing and controlling people. And so, we see very similar messages being promulgated across these communities, which often cross-pollinate.

And one of the, I think, really unremarked-upon aspects of this is the degree to which young boys who are playing games, often in networked fashions, are exposed to these ideas. And no one’s really talking to them about it. So, we use a lot of language in talking about these shootings that hide the effect of gender. So, if we say that people are using guns, really what we mean are boys and men are using guns. If we say that people lack empathy, really what we mean are that boys and men lack empathy. And so, in these cases, which are so incredibly, overwhelmingly perpetrated by young men—almost always young white men in these school shootings—we still hear people say, “Well, we don’t really have a good profile of the shooter.” And that’s not true. We do have good profiles of these shooters. And we need to investigate why it is that we continue to cultivate a lack of empathy in boys, in general, and to ignore the warning signs by excusing them, saying things like “Boys will be boys” and “This is what boys do,” which is really very heartless, I think.

MURTAZA HUSSAIN: Well, we have a habit in this country that when a crime is committed by a minority group, we generalize that crime to the entire group, where when it’s done by a white person or a white male, it’s viewed as an individual act. Now, I don’t think that we should generalize this act to any category of people, but we should question why we do that for certain cases and don’t do that for others.

I think that Soraya is very correct to highlight that there is a class of entitled young men who are very angry, and they have the ability to act on their anger in a very broad fashion because of the access to weapons in this country, as well. So there’s a confluence of different factors here. I think that we should resist the urge to, you know, call this a white Christian terrorist act, in the absence of more evidence, but we should also extend the same—

MURTAZA HUSSAIN: —generosity of categorization to other groups, as well. 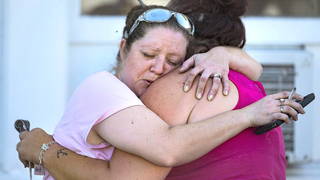