On Tuesday, Federal Judge Dana Sabraw in San Diego ruled all children under the age of 5 must be reunited with their parents within 14 days, and all children 5 and older must be reunited with their parents within 30 days. Health and Human Services Secretary Alex Azar has claimed he could easily locate any of the children separated from their parents. But immigrant parents and their lawyers tell a different story. We speak to Rochelle Garza, an immigration lawyer based here in Brownsville, Texas, who is now representing immigrant families who have been separated by the Trump administration’s “zero tolerance” policy.

AMY GOODMAN: Yes, this is Democracy Now!, democracynow.org, The War and Peace Report. We’re broadcasting live from Brownsville, Texas, in the Rio Grande Valley, the epicenter of the Trump administration’s “zero tolerance” crackdown against immigrants. Hours from now, more than a thousand people from across Texas are expected to converge right here, in front of the federal courthouse just behind us—in fact, right behind me, “Families Belong Together” rally is—the stage is being constructed—to demand the Trump administration comply with a federal judge’s ruling that all migrant children separated from their parents must be reunited within 30 days. Kids under 10 [sic], 14 days, must be reunited. On Tuesday, Federal Judge Dana Sabraw in San Diego ruled all children under the age of 5, rather, must be reunited within 14 days, and all children 5 and older must be reunited with their parents within 30 days.

Health and Human Services Secretary Alex Azar testified in a Senate Finance Committee hearing on Tuesday that 2,047 migrant children remain separated from their parents. He also claimed he could easily locate any one of the kids.

HEALTH AND HUMAN SERVICES SECRETARY ALEX AZAR: There is no reason why any parent would not know where their child is located. I could, at the stroke of—at keystrokes—I’ve sat on the ORR portal—with just basic keystrokes, within seconds, could find any child in our care for any parent.

AMY GOODMAN: But immigrant parents and their lawyers are telling a very different story. In an interview Wednesday night, attorney Efrén Olivares the Texas Civil Rights Project here, when we went to McAllen to speak to him, described how officials have been keeping track of the families that they separated.

EFRÉN OLIVARES: The Border Patrol agents take a family picture, a picture of the family unit, they call it—so, a picture of the child and the parent—to then keep track of who belongs with who. If that is the system, it’s full of problems. It’s highly fallible. Forget the problems with cross-racial identification. Just forget about that. Just taking a picture of a 5-year-old and then trying to match him or her with his mom, it’s going to be a disaster.

AMY GOODMAN: So, let’s go right now to Rochelle Garza. She’s an immigration lawyer based here in Brownsville, Texas, who is representing immigrant families who have been separated by the Trump administration’s “zero tolerance” policy. Last year she also represented the 17-year-old immigrant known as “Jane Doe,” who had to sue the ORR—that’s the Office of Refugee Resettlement—for the right to have an abortion while she was jailed in an immigrant detention center here in Brownsville. In a ruling this month, the U.S. Supreme Court refused to consider disciplinary action against Jane Doe’s attorneys, including Rochelle Garza, in a case brought by the Department of Justice.

We welcome Rochelle to Democracy Now! So, talk about what is happening. More than 2,000 children are separated. You represent parents. Are they able to speak to their kids?

ROCHELLE GARZA: Well, thank you for having me.

AMY GOODMAN: And get their kids?

ROCHELLE GARZA: No. Right now, the family that I represent has been unable to have any contact with each other. The system for navigating, locating a child is incredibly difficult. There is a hotline number that has been given out by the Office of Refugee Resettlement; however, any time you call that hotline number, all they can tell you is, “Yes, we know that the child is in detention. We can confirm that. But we cannot give you the information as to the exact location of that child.”

AMY GOODMAN: So, what happens then?

ROCHELLE GARZA: Well, he’s at least not sharing the information with advocates, attorneys that are representing families in trying to reunite them. You know—

AMY GOODMAN: So what happens? Explain—when you have a parent, what do they do?

ROCHELLE GARZA: I mean, I can speak to my client. I mean, he’s currently detained, and I’ve been looking for his daughter or trying to locate his daughter in the ORR system since early June. There’s a hotline number. You call the hotline number, you give the information for the parent and for the child, and all they can do is say, “We can put in a request to the facility holding the child to contact you.” And this has been going on for weeks.

AMY GOODMAN: And how old is the child that your client is trying to reach, his child?

AMY GOODMAN: And where is she?

ROCHELLE GARZA: Well, the government has not helped me with that information. I have—

AMY GOODMAN: She could be anywhere in the United States?

ROCHELLE GARZA: I did get lucky—full disclosure: I did get lucky, and the first person that I did speak with did confirm she was in the state of Texas. So, at least I have that information and have been able to work off of that.

ROCHELLE GARZA: Yes. And the issue is that when “zero tolerance” was implemented, there wasn’t a lot of transparency. You know, on the ground level, lawyers, organizations were scrambling to track the families that were being affected. So, all of the sudden, we just heard that there was a massive influx of children into the facilities located in South Texas, and then started seeing mass prosecutions in the federal court system, so 40 to 70 people in the morning and in the afternoon being prosecuted for improper entry in federal court. And so, from there, you know, advocates have been trying to create a system for, one, identifying the parents that have been prosecuted under 1325 for improper entry, and then trying to talk to them and see if we can locate their children.

AMY GOODMAN: Talk about Casa Padre, right here in Brownsville. What is it?

ROCHELLE GARZA: Casa Padre is an ORR-funded facility. It is run by Southwest Key. And it currently has the capacity for 1,500 children. As I understand it, the recent number of children that are in there are around 1,400, and they’re mostly boys, teenage boys, that are housed in that facility.

AMY GOODMAN: And what—have you gotten any sense of things being different since President Trump said they are going—since he issued the executive order rescinding the policy of separating the children?

ROCHELLE GARZA: Well, I mean, no. So, he ordered that the separations would cease, but he didn’t speak to the actual prosecutions of individuals. So, what it looks like, or what we’re trying to figure out what’s happening is: Are families being put into detention as a whole and the parents being prosecuted? So, it’s been, you know, one thing after another. A lot of changes have been happening. And on the ground, it’s difficult to see what’s happening, until it’s already happened.

AMY GOODMAN: So, what does this San Diego federal judge ruling mean, when she said in the next 14 days every kid under the age of 5, of these 2,000, more than 2,000 kids, must be reunited with their parent, and in 30 days all the kids must be?

AMY GOODMAN: But how is it going to happen?

ROCHELLE GARZA: I don’t know. Logistically, it doesn’t really make sense. Like for my client, he’s still currently detained. He’s in immigration detention. We’re hearing that they want to set up some sort of family reunification at Port Isabel Detention Center, which is not far from Brownsville. It’s about a 40-minute drive. I don’t know what that looks like. And my concern is, if you put families in that area, if you put them together in that detention facility, one, Port Isabel Detention Center is not equipped to handle children. And as I understand it, it is already at capacity. And, two, if you’re going to put all these families together there, you’re suspending the due process rights of the children themselves. And you’re also violating Flores, the Flores agreement. You can’t have them detained for more than 20 days. This is assuming that the children don’t have an asylum claim or a special immigrant juvenile visa or any other sort of legal relief of their own, separate of their parents.

AMY GOODMAN: And we’re going to talk about political asylum in a moment with Jennifer Harbury. I wanted to go back to Jane Doe, Jane Doe who in the immigration facility, one of the—one of your clients, ended up being able to have an abortion, even though the head of ORR, the Office of Refugee Resettlement, Scott Lloyd, was personally determined to prevent her.

AMY GOODMAN: He came down to Texas. He is the head of this entire Office of Refugee Resettlement. But his main issue in his life has nothing to do with refugees, or experience in dealing with refugees. It’s just anti-abortion activism.

ROCHELLE GARZA: Yeah. And we received an incredible amount of pushback from him. And the Jane Doe case was, you know, a really hard-fought one, and she was incredibly determined to get the procedure that she wanted. And we were able to make that—we were able to accomplish that for her, but there were a lot of other Jane Does that came forward after our Jane Doe, Jane Doe 1.

AMY GOODMAN: Is there anything else you’d like to say, not only to the people of this country—we’re broadcasting on 1,400 public television and radio stations around the world—

ROCHELLE GARZA: Mm-hmm. Well, there’s a lot going on down here. And there are a lot of activists and community leaders that are working against some of these issues or working to stop the administration’s policies. There are—as I understand, there’s about 3,000 children currently in detention in the ORR-funded facilities. One of my concerns are the tender-age children. And I know that there’s been reporting on that.

AMY GOODMAN: Tender age being under the age of?

ROCHELLE GARZA: Of 12. And Jane Doe—and a lot of people don’t know this, but Jane Doe was detained in a facility that was—that lost their contract later on from ORR. And that facility specialized in tender age, in taking care of tender-age children and setting them up with foster families, so the least restrictive means of detaining these children. And now my question is: Where are those children?

AMY GOODMAN: Well, we will leave it there. Where are those children? Rochelle Garza, thank you so much for being with us. Of course we’ll continue to follow this issue, as we broadcast from the Texas-Mexico border. We’re in Brownsville, Texas. We’re going to speak to Jennifer Harbury, the well-known human rights activist and attorney, next. Stay with us. 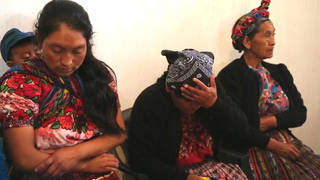 “A Translation Crisis at the Border”: U.S. Immigration Courts Are Failing Mayan-Language Speakers